Nigerian international Victor Osimhen, who lost consciousness and was rushed to the hospital in an ambulance during Napoli’s last Sunday’s Serie A fixture with Atalanta is now in a stable condition.

Fides gathered that the Nigerian striker who hit his head on the turf after a Cristian Romero challenge during the final minute of Napoli’s 4-2 defeat at the Gewiss Stadium in Bergamo was recovering. 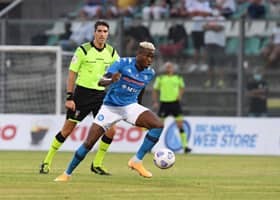 Also, Osimhen lost consciousness for a few minutes before he was stretched off, Fides learnt The severity of Osimhen’s condition was not known but when the players discovered after a few seconds, they called for medical help on the pitch.

Fides discovered that Osimhen was rushed to Bergamo’s Papa Giovanni Hospital accompanied by Napoli’s doctor and is reported to be getting better.

Fides recalls that Osimhen has been struggling with a lot of health problems lately, as he dislocated his shoulder on international duty in November, then was diagnosed with COVID-19 in early January.

However, Osimhen who was attended to by Professor Canonico had regained consciousness in the ambulance that transported him to the Papa Giovanni XXIII Hospital.

Although Napoli’s number 9 underwent tests and it was discovered that he had suffered a head injury.

The 22-year-old had promising start to his career at Napoli, directly participating in three goals in his first six appearances in the Serie A.

Following their eighth loss of the season, Napoli are seventh in the table with 40 points, three off the Champions League places.

Osimhen has struggled to make an impact since recovering from a shoulder injury he suffered while on international duty and coronavirus, failing to score in eight consecutive matches since his comeback.