The senatorial candidate of New Nigeria People’s Party, NNPP, for Anambra Central, Bar Mrs Helen Mbakwe, has urged Nigerians to be part of the campaign to change the old order by electing a new set of leaders that will return the country to her past glory.

The senatorial candidate who spoke with Fides in Abatete, last Monday, said she chose NNPP because of her belief in a New Nigeria standurged the people of Anambra Central to embrace the change and elect her as the senator to represent the zone.

Her words, ‘I cannot go too far with any person who had worked with the old government because it is usually difficult to change people and things.

‘I have already planned the new things I will bring on board which will work well with the next president that will usher in the new hope for Nigerians. Our people know that things are not working well, which is why they want a new Nigeria. If things had been working well, we would not be talking about Hope Nigeria and my ambition is to be part of those that will make laws to change the old order,’ she said.

Mrs Mbakwe insisted that since Nigerians desired a new president in 2023, they should also put in new people that would work with the president and effect the change from top to bottom. 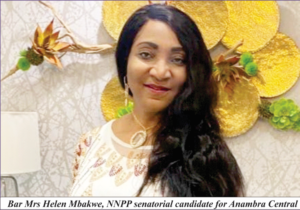 On the security situation in the country, the Anambra Central senatorial hopeful accused the present government at the centre of not doing enough to tackle the issue of insecurity, pointing out that the solution was no rocket science as long as it was approached with sincerity.

‘Tackling insecurity is not impossible if the right decisions are made. If the government is determined to solve the problem, it will be done easily. As far as I am concerned, government has not done enough to address the problem,’ she said, while calling on Nigerians to embrace what she described as the hope mantra that would replace the old, corrupt order.