Nigeria in Need of a Unifier – Okonkwo

For Nigeria to be freed from the shackles of ethno-religious politics, she needs a man that will unify the country at a critical time of its History.

The Chairman of United Nigeria Airlines Company Limited Prof Obiora Okonkwo, stated this during the Ofala Celebration of the Obi of Onitsha, Nnaemeka Alfred Achebe, October 22, in Onitsha.

The business magnate who represented the vice presidential candidate of PDP, Ifeanyi Okowa, at the event, said Atiku had built many bridges across Nigeria and remained the best to occupy the position of the president of Nigeria.

Okonkwo who also is a chieftain of the PDP, expressed confidence that the party would win the 2023 Election and urged Ndi Anambra to join hands and vote for PDP in 2023 in order to, according to him, reconnect to national politics. 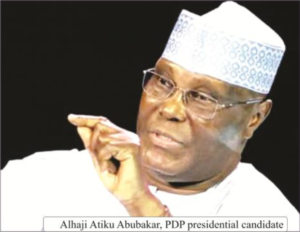 ‘We are following Atiku because we know he has all it takes to reunite this country. PDP is not just a party but an institution that has come to last since 1999. The party has survived the All Progressives Congress, APC, misrul of eight years and we are still moving stronger,’ he said.

Okonkwo said the victory of Atiku was inevitable and urged the Anambra people to join because it was for their good. According to him, the only wire that could connect Anambra to the national was PDP and no other party.

His words, ‘There are enough reasons for Ndi Anambra to vote for PDP and support Atiku because Anambra people have always supported PDP in previous national elections.’

On the issue of Peter Obi, the presidential candidate of Labour Party, Okonkwo said people would always express their choice in a democracy, pointing out that he did not have any problem with anyone making their choice.

He said that despite everything, Anambra people would still vote PDP as they had done previously.

‘Anambra State is open to multi political interest and the majority will always win. Anambra has given PDP over 80 percent in national elections and I hope it will still repeat itself,’ he said.

Okonkwo also disclosed that the campaign committee of PDP would campaign in every ward and local government of Anambra State to curry votes.

‘PDP is prepared, Anambra is PDP, we have won in the past all through in presidential elections; landslide. We have won the majority in the National Assembly, I don’t think this will be different. I have no doubt that Anambra people know that they have to reconnect to Abuja and the only wire to reconnect us is PDP,’ he said.