9 days into the start of AFCON 2021, there is hardly any Nigerian that expects that the Super Eagles will not get to the tail end of the championship. Such a high expectation is justified.

Nigeria can be counted amongst one of the most consistent and most successful countries in the history of AFCON since the country started to participate in Africa’s most prestigious football championship in 1963.

A quick glance at the statistics of the country’s performances since 1976 in particular, to date, explains why the Super Eagles are always considered by many unbiased pundits as one of the favourites, despite all the kata kata (crisis) that often surrounds the team, particularly, as in the present instance, poorly handling the technical content of the team so close to the championship. 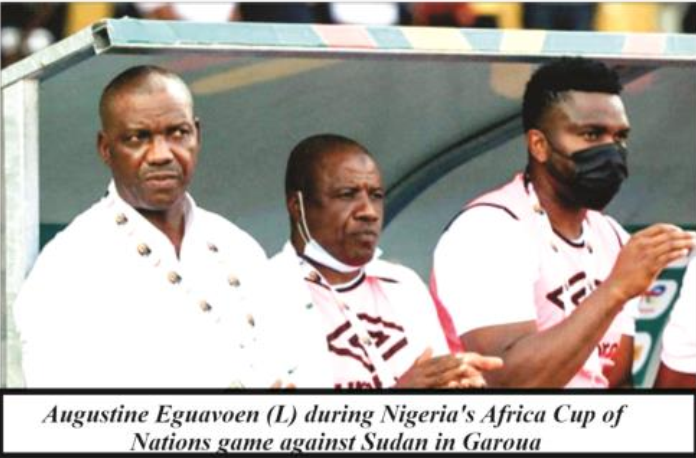 This seeming exalted status was first earned on the field of performance in 1976. At Dire Dawa, Ethiopia, the Green Eagles emerged fully unto the top echelon of African football. Nigeria’s national team coach, Yugoslavian football teacher and coach, Yelisavic Tito, assembled a team of individually gifted players for the different positions on the field, and gave them the freedom to express themselves and to play to their natural strengths.

He gave them a simple overall team strategy – attack, attack and attack through the flanks. He did not try to complicate matters with patterns and systems that could not have been mastered on the poor grounds of domestic Nigerian football.

The players whose chance to play in the national team came because established stars failed to respond to the invitation to the national camp and held the country to ransom, seized the opportunity, determined not to relinquish the positions, and played like spiritually-possessed persons. They followed Father Tiko’s strict but simple instructions, and started to shine brilliantly. These unknown gifted players soon became the toast of African football.

From the 1976 championship, the continents two best wingers on the right and left sides of attack were discovered – Kunle Awesu and Baba Otu Mohammed.

One of Nigeria’s greatest midfield players, Mudashiru Lawal rose to the top of African football awareness. The talents of Thompson Usiyen blossomed brightly.

It was in 1976 that Nigeria’s real football identity was carved and first put on display in Africa. It was the first step in the proper development of a style for Nigerian football built on the back of players’ natural skills and ability, and maximally utilized without too many complicated technical or tactical instructions.

Throughout the 1970s, Nigeria’s football system on the field was not well organized. It could not be because the country lacked good grounds for consistent training and rehearsals.

So, Father Tiko looked for natural talents for every position on the field and made the players to play in accordance to their strengths.

At the end of that championship, from no records of previous achievements, Nigeria established its unique style of physicality combined with individual expressiveness, speed and one-way traffic of always going forward and ceaselessly attacking opposing defenses. The team had no time for backwards and sideways, endless ball passing!

That style took Africa by storm. Only the organized play of North African teams could de-code it and neutralize its impact.

The team came out of AFCON 1976 in Third-place. With a little bit of better organization and tactical discipline it had the talent to have won the championship.

1978 merely reinforced the ‘discovery’ in 1976. Tiko did not change his style. He made the players master it. His organized defensive strategy was to use strong and hard defenders to neutralize opponents. His team spent most of the time launching waves of attacks time, and mostly down the flanks.

When it worked, it often resulted in great goals, and was a delight to watch. The team could have won the 1978 AFCON but missed it narrowly due to that deficit of tactical depth at one critical moment during one a quarter-final group match. The Green Eagles got to the semi-finals.

Playing at speed and using empty spaces behind defenses became the hallmark of Nigerian football, ‘beauty and the beast’, the ‘beauty’ being the team’s attacking flair with almost ‘reckless’ abandon, and the ‘beast’ the deficit in overall defensive organisation.

In 1980, the country won, despite the team’s known weaknesses, by reinforcing the team’s strengths with some new South American flair and flamboyance, and by sustaining the established simple strategies and style, and deploying both to maximum use playing on home-ground.

It would have been a major set-back had the team failed to win. What did the additional transformation were the three months spell training and playing matches on the lush green fields of Brazil, taking lessons from losing many of the matches against Brazilian teams, and using them as stepping stone to higher ground. That transition became the bedrock of Nigeria’s most successful era, one that has made Nigeria the powerful force that the country’s football has become in global football today, a team that can only be taken for granted by teams seeking defeat. The Eagles became capable of defeating any team on earth on their good day.

In the 1980’s decade, the team got to the finals three times, always a difficult opponent to play against, and were always on the periphery of success.

Into the 1990s, despite the arrival of distractions by the conflicts in football administration and incursion of politics into football affairs, the country climbed to the top by winning the 1994 AFCON most emphatically, and playing the best brand of the new Nigerian brand of football.

Two years after that, they dropped to the bottom of the heap, a fall that was the product of political interference. The country foolishly withdrew from 1996 championships that she could have won, and was barred from the next in 1998 as a consequence. The hara-kirithat set in affected the next three editions into the 2000s, and the team’s established structure was destroyed.

The country did not find its feet again properly. Led by a Nigerian, and amidst crisis that had become a recurring decimal in Nigerian football administration, the country won the 2013 version. Since then, with foreign coaches in charge that were not grounded in the fundamental philosophy of Nigerian football, and introduced all manner of styles into the team, the country’s football floundered, oscillating between bad and worse through the AFCONs in that era, to date.

In Egypt, at the 2019, AFCON, the team got to the semi-finals, but was almost unrecognizable from the free-flowing, all-attacking team that was the culture of Nigerian football. The national team since then has been mostly influenced by players drawn from European clubs without proper grounding in Nigerian football.

It has been looking more and more like a team lost in limbo, with foreign coaches from Europe, players mostly bred on the foundations of European football trying to play in Africa. The teams have been neither here nor there.

That is the setting going to AFCON 2021 that started nine days ago.

No one is sure of what would happen.

A Nigerian interim coach has been hurriedly put in charge, with a foreign coach ungrounded in Nigerian football breathing down his neck and waiting to take over irrespective of the outcome of the championship.

It is a perfect setting for Augustine Eguavoen to fail, even as he has

limited time to imbibe in the mostly ‘foreign-based’ players the Nigerian football culture and spirit.

Despite that, he must not fail.

What is certain, on the eve of the championship is that, as has been the practice, and knowing the natural place of the Super Eagles in African football, no matter the circumstances, the Eagles shall be at the tail end, stretching out to breast the tape in a ‘photo-finish’.

Will the Super Eagles win it? Can they win it?

The answer is blowing in the wind.