The beneficiaries drawn from villages in Umuawulu Community, Awka South Council Area, were presented with starter packs to commence their own businesses in aluminum fabrication, hair dressing, fashion design and welding.

Speaking during the ceremony to also mark his birthday at Umuawulu, the benefactor, Chief Christopher Ndubisi, said he considered it worthy to empower people to be useful to themselves and society at large. 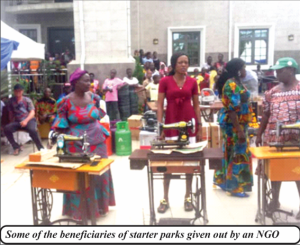 The Founder of Foundation who was represented by his Chief of Staff, Hon Patrick Ezekwudo, added that the gesture was his own contribution to building individuals, irrespective of any consideration to be meaningfully engaged.

In his remarks, the Chairman of the Foundation Committee, Rev Fr Benjamin Odika, explained that the committee was set up to screen and empower indigent people from the community on various trades.

According to him, after the screening exercise, 35 people qualified to receive empowerment materials with generators to immediately start their own businesses.

He added that the empowerment would be sustained to fully achieve the desired effect even as the foundation had offered scholarship and other support services to brilliant but indigent students.

While urging the beneficiaries to make judicious use of the equipment, he said mechanism had been put in place to ensure that the items were not sold out as court action could be taken in the event of such practice.

Some of the beneficiaries, including Chinonso Eke, Ifeanyichukwu Ahili and Chinaza Eke, thanked God for using the foundation to touch their lives and prayed God to bless their benefactor for his kind gestures.