Minister of Labour and Employment, Senator Chris Ngige, alights from a plane which landed at Anambra Airport

Minister of Labour and Employment, Dr Chris Ngige and the candidate of the All Progressives Congress (APC), Senator Andy Uba in the last governorship election, last week Thursday landed a presidential jet and a private jet respectively at the newly commissioned airport.

Former governor of Anambra State, Dr Ngige who landed in a presidential jet, touched down at the Anambra Airport and at 12:35, and was accompanied by his aides. 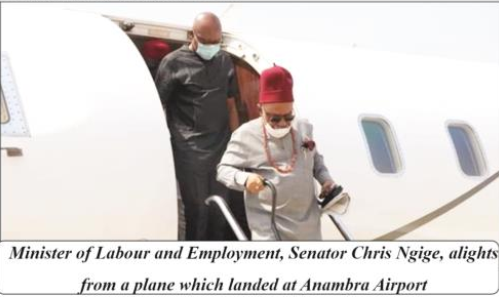 The airport had been commissioned about two months ago and was later approved for commercial flights. Gov Willie Obiano who commissioned the airport had expressed optimism that the project would cause a turnaround in Anambra State in terms of investment, while envisaging that the airport would be a very busy one.

Ngige who spoke to journalists at the airport, commended Governor Obiano for his foresightedness in building the project, while also praising its quality.

Ngige was received by the Commissioner for Works, Engineer Marcel Ifejiofor, alongside other government officials, and was also shown round the project.