The Nigeria Football Federation (NFF) has said it is observing the reports that the Cape Coast Stadium in Ghana, which will host the first leg of the Qatar 2022 World Cup play-off between the Black Stars and Super Eagles on Match 25, is currently in bad shape and undergoing rehabilitation a few weeks to the crucial game. 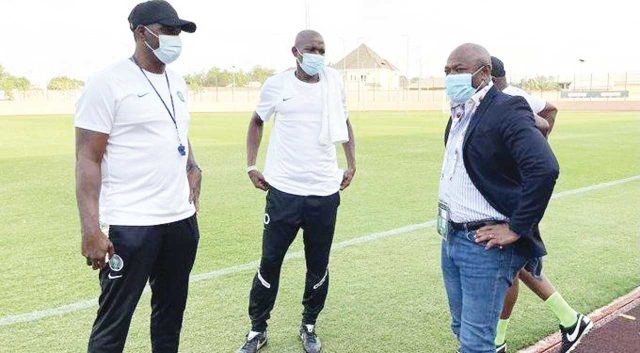 Speaking with newsmen recently, Super Eagles Team manager, Patrick Pascal, said that there is no course for alarm over the news of the poor state of the Cape Coast Stadium saying that the Confederation of African Football (CAF) is always strict and professional in screening stadia for international engagements.

Pascal stated that the NFF would be depending on CAF to decide if the venue of the match would be shifted to another venue or not.

‘NFF don’t have the power to change the venue of matches. If the Cape Coast Stadium is not good enough for the World Cup qualifiers, CAF will announce the change. NFF is observing situations in Ghana, and if there is any need to complain about the venue or anything ahead of the match, we will report to CAF to take the final decision on it. Our focus now is on the qualifiers and we pray that players invited are injury-free,’ he said.

According to reports, the Cape Coast Stadium Football Pitch was badly damaged during the celebration of Ghana Government Celebration of its 65th Independence Anniversary on March 6.

Pictures on social media showed holes in the pitch, while others showed work still ongoing.

There are insinuations that the condition of the pitch might force the World Cup qualifiers play-off to be moved to another stadium in Accra or Kumasi.

Ghana Football Association (GFA) had early asked CAF to allow it to move the game to another stadium but was rejected.