It wasn’t long when I engaged some of my friends in a social media group on the propriety or otherwise of trying to attain the highest level in education when such neither assures one of a meal ticket as an individual nor lifts our country economically. While an appreciable number saw my point that it was no use acquiring education that will take you nowhere, economically, a few insisted that education was good and should not be reduced to a matter of getting a meal ticket. 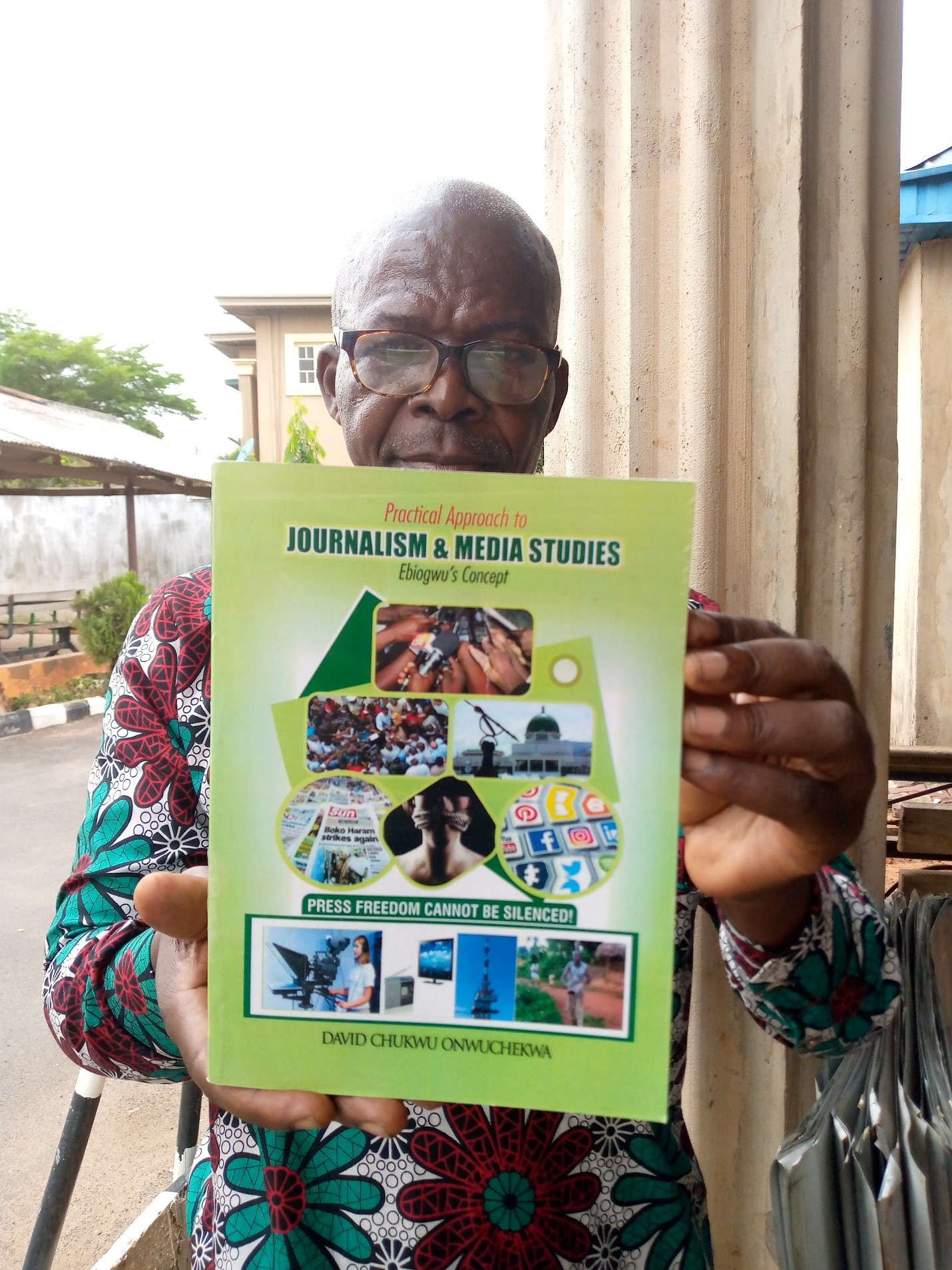 Latest author in town, David Onwuchekwa of the Sun Newspapers

Well, everyone is entitled to their views, aren’t they? But to me, I have looked at the stark economic realities in this blighted country and come to the conclusion that one has to be pragmatic enough to know at which point to pause in one’s educational pursuit and veer into whatever will sustain the person to avoid coming out with a certificate that will not get one food on the table.

I had in mind the present global reality which gives those with extra skills an advantage over those with mere papers or certificates. And whenever I think this way, the Chinese and Japanese jump into my mind. Many of the men behind the industrial and technological revolution in those countries are not university professors or even graduates. They are those with awesome skills that have seen them advance their countries ahead of others in technology.

They are people who have no time for white collar jobs which formal education offers. They are those who identified their destinies early enough and pursued them. They are further blessed by being in countries that do not place too much emphasis on paper qualification like we do. They respect competence and go for competence, whether you have the highest certificate or not.

Once upon a time, Nigeria used to have technical colleges which offered a students the chance to become skilled and on graduation became self-sustaining. But over time, these schools began to die off until they are virtually non-existent now. What we now have are schools that dwell more or less on theories, regardless of the names they answer. Oh yes. That is why today a professor of Electrical Engineering will acquire the services of a street electrician to wire his house because he cannot put into practice what he professes. It’s as bad as that.

This is why I believe that our education system needs an overhaul. We have been standing on a wrong foundation for some years now and a shaky one for that matter.

With the plethora of educated professionals in our midst, how come that only a certain Innocent Chukwuma of the Innoson Motors fame that is manufacturing vehicles? And mind you, that man is neither a professor nor even a conventional university graduate. But he’s doing what the educated professionals cannot do and are not likely to do in the foreseeable future.

The failure of our educated professionals in this direction is because the country’s education system has since lost focus and needs a shot in the arm. It needs to be re-orientated in order to catch up with the challenges of modern times. And that can only begin to happen if we start placing less emphasis on paper qualification.

This emphasis has become our bane, leading to an increasing army of young school graduates wandering the streets with useless papers called certificates.

It is happening because we have sacrificed competence on the altar of certificates and look certain to continue for a long while yet. Thus we have many graduates who cannot defend their certificates due to a variety of factors.

It is either such people did what we call mago mago to graduate or did sorting to lecturers to have their certificates. Sorting is the syndrome of bribing lecturers with money to earn unmerited marks.

It can also mean female students sleeping with lecturers in order to get good grades which they also do not merit. When such people get the required certificates, they are employed as lecturers in an already aberrant system. And so the rot continues and worsens.

But it is not all doom. Sometimes you come across some shining lights, some people who work very hard and whose output justifies whatever qualification they hold. I ran into one of them last Monday when he came to my office to take delivery of a book he authored.

That person is no other than David Onwuchekwa, Nnewi correspondent of the Sun Newspaper. He’s a veteran journalist who’s been very much around in this state and is conversant with all that happens in the field.

He just wrote this book based on his years of journalism practice and experience in the field (field experience is invaluable). The book is entitled, “Practical Approach to Journalism and Media Studies: Ebiogwu’s Concept”, printed by Fides.

The book is unique because of the author’s background as a field journalist. Nothing compares to practical experience. The other day, I watched a video clip of First Republic Minister, Mbazulike Amaechi, talking about the politics of his time. I described him as a living History. Here was a man sharing firsthand experience of the very History taught in schools.

I wondered why our tertiary institutions don’t invite such people to come to the classrooms and have sessions with students; in this case, students of Mass Communication and Political Science.

These are people who are talking because they are involved. Imagine the difference it will make for students to listen direct to such people.

We should look more in this direction rather than emphasizing on paper qualification. This emphasis has led to many doing everything to get such qualifications in order to either be employed as lecturers or to earn a living elsewhere.

This reliance on paper qualification has, as stated earlier, become a major bane of the country’s education where we are ill equipped to thrive in the present day technology driven world.

Look at the Chinese and Japanese and see how they’ve used their skills and practical experience to change the world. But here, it’s all about certificates which often turn out to be mere papers.

Is it any surprise seeing a professor of Mechanical Engineering seeking the services of a roadside mechanic to treat little problems in the professor’s car?

It is my view that there’s no point reading and reading when there’s no possibility of earning a living from it. In the country today, except you want to lecture in the university, reading up to PhD level could well be a waste of time as no jobs will be forthcoming.

What do we do then? After the first degree, those with particular skills or with business nous, should seek their destiny early in life and be useful to society, rather than flaunting empty certificates.

My position may sound controversial but it is based on the stark realities facing us in this country. We can’t go on pretending that all is well. A roadside mechanic who is good at the job should be respected as much as a university professor that’s good in his field.

They’re both experts. If we should be recognizing outstanding professors with state or national awards, let’s also recognize that mechanic that is viewed by many as exceptional. Let’s recognize the best cobbler or that outstanding tailor. They’re not different from any professor because they’re all experts in their chosen fields.

I tell you, if we begin to shift focus to such things as I’ve suggested, many people will begin to realize that success isn’t only achieved through a white collar job. People in other fields will begin to take pride in what they do and become more productive to the extent that very soon we will have our own Guccis in designing.

Encourage those Aba tailors and cobblers and see what they can do.

But our system doesn’t look at practical experience. It looks at paper qualification. That’s why we have many who got their PhDs anyhow so they could lecture, while not being anywhere better than a first degree holder. Let’s begin to recognize merit and capability.

Nothing stops our universities from employing capable people without PhDs to teach. I even know a young man with a Masters Degree who was refused employment in the ivory tower because they wanted him to have a doctorate. But that young man is by many miles a lot better than many PhD holders today in his area of specialization.

In fact, whenever I see that young man, I weep for our system and what it has lost as that young man is now employed elsewhere where he will not impact on our education in any way. The Onwuchekwas, that young man and Amaechis, without PhDs, can do it better than some with PhDs.

This isn’t saying that attaining high standards in education is bad. I am only saying that we should also recognize competence as is done in developed climes.

As we have what we call powerless power, so we have useless certificates. Let’s be pragmatic for a change. Our old ways have failed us, hence the inability of many of our university engineers to produce even a pin.

It’s time to wake up and move with the times, having done the same things repeatedly and not getting any better.