Newspaper stands can be described as informal lecture halls where many readers gather on daily basis to acquire education. Great thanks to journalists, vendors, writers, publishers and publishing companies who make this possible.

Reading newspapers helps to nurture and develop the mind, ideas, knowledge, habits, values and attitudes of those who value reading them. Some of the strategic newsstands include the one at the Old Market Road in Onitsha near the Post Office; newspaper stands near Eke Awka and Urban Mass Transit Depot in Awka. Others include the one near Foot Bridge at ACO Estate, Lugbe-Abuja; Douglas Road, Owerri and at ACB Lane near Ekwulobia Motor Park in Anambra State. There is one near the Pedestrian Bridge at UNIZK Temporary Site Junction in Awka and at Aroma Junction also in Awka, among others across the country. 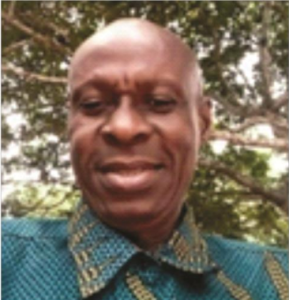 The newspaper has the power to trigger public discussions and influence public opinion. In Nigeria today, you see many people at the newspaper stands reading newspapers. It is another forum to discuss the situation of our economy, the politics of Nigeria, and the business of the day. The habit is on daily basis as they gather at the newsstands to know the latest happenings of the day. It is an opportunity for those who did not have formal education to have informal education. Therefore this writer, Livinus Nnebedum, is hereby describing newspaper stands as informal lecture halls.

Reading newspapers is like feeding your mind and heart with food. Just like music, it is the food of the heart. People who keep themselves busy reading newspapers have no time to gossip or engage in character assassination. Instead, they engage themselves in discussing public opinion from what they read from the newspapers. There is joy derived from reading newspapers that cover all aspects of human interest namely; politics, social activities, current events, advertisement, business, tourism, academics, etc.

Newspapers have shaped culture, influenced politics, played vital roles in businesses and affected the daily life of millions of our people. By the 7th Century, the Chinese were producing the world’s first printed newspaper called, Dibao. In Nigeria, many newspapers were established towards the end of the 19th and early 20th Centuries. Some of them include, The Lagos Observer; The Times of Nigeria; The Gold Coast Colony Advertiser; The Lagos Times, etc. In 1926 Daily Times was established. During the 1983 general elections in Nigeria, some of the popular newspapers in circulation to mention but a few included, National Concord, Daily Star, Daily Times, Lagos Weekend, Business Times, Trumpet, etc.

In Nigeria so many newspapers are currently in circulation namely; The Authority Newspapers, Sun Newspapers, The Nation, National light, This Day, Guardian, Maranatha, The punch, Vanguard, Fides, Champion and so many others. It is good to note that the first newspaper that appeared in Nigeria was Iwe Irohin in 1859 which was established by Rev. Henry Townsend at Abeokuta. The paper was using the Yoruba Language. The paper was serving as a link in the chain of those missionary journalists who sought to encourage education and enlightenment.

I recall my first visit to newspaper stands was in 1976 to buy and read newspapers, especially Daily Star and Daily Times Newspapers. My first article was published on Wednesday, Feb 13, 1985, by Daily Star. The cover prize of Daily Star in that Feb 1985 was 20 kobo per copy. 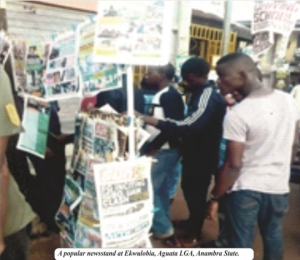 The role played by newspapers and their editors in the formation of various parties the in Nigeria can easily be identified. The Nigeria National Democratic Party (NNDP), formed in 1923, was co-founded by Horatio Jackson, editor of The Lagos Weekly Record and Herbert Macaulay of the Lagos Daily News. The influence of the press and journalists did not end with the formation of the early political parties. It extended to the three main parties in the country before the advent of the military regime in 1966. The National Council of Nigeria and the Cameroons (NCNC) and the Action Group (AG) came into being as a result of the feud among journalist politicians like Zik and Awolowo, on the hand, and between supporting newspapers on the other hand. Newspapers provide a network of communication through which ideas, information and directives can be diffused through the gate of the press and the government to the doorsteps of the people and vice versa.

Newspapers as print media like other media and the press in general, are the mirror or vision for the people. The press is the 4th Estate/Level of Realm of the government. It is necessary to realize that mass media in general, information and communication technologies and improved transportation, have literally turned the world into a small space or global village. By reading newspapers, books, magazines, etc, and more importantly with information communication technologies (ICTs) one can stay at home and know literally more about the whole world.