There is this thing we call medicine after death. It is just as it is: administering medication to one who is already dead. That was what played out in the outgone week as our deaf and dumb president, Muhammadu Buhari, finally decided to effect a change of guards in the country’s security apparatus that had become a mockery before the whole wide world. It became medicine after death because the change is meaningless now.

It is coming after hundreds of lives had been allowed to be wasted by blood thirsty hounds protected by Buhari’s Federal Government.

During this time, all manner of entreaties were made to Buhari to overhaul the nation’s security apparatus that had supervised the spilling of innocent blood, rather than prevent it. 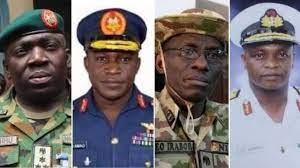 New service chiefs: too late to make a difference?

Those entreaties fell on deaf ears. Even in the height of the killings Buhari hardly seemed to care; failing (or is it refusing?) to even visit the victims’ families. Not even when over seventy people were slaughtered in Benue did he care to talk or visit. Yet it was an incident that would have retired those in charge of security in any sane climes.

So last week he decided to do what he should have done four years ago and that is to say that this change is coming four years late. But some people, probably beneficiaries of this better forgotten regime, are clapping for him. I will not.

But who are the new boys?

Some say that at least these new people have a background of federal character, having come from several zones of the country and not belonging to one religion. No doubt this is true. However, most Nigerians would not have bothered if things had been done as they should these past years. The average Nigerian wants good governance and good governance covers everything, including having food on the table, enjoying security of life and property, affording reasonable luxuries, being able to access good health care, having affordable homes, e.t.c.

But since they could not afford all the above, frustration started creeping in and questions began to be asked. It was then that people started finding out and wondering why a certain region had been producing the leaders of the country. They also began to discover that all of those leaders belonged to a particular religion. And the people did not like it. Their not liking it was informed by the knowledge that those who had been at the helm and their people always frowned at those not of same religious faith occupying certain positions. So the others also began to question why it was so.

Things became very bad under Buhari whose style widened the gulf of difference instead of closing it. He began to take Nigeria back to the dark and bloody days of the First Republic which witnessed a debilitating civil war. It was the first time Nigerians became sharply aware of their ethnic and religious differences.

The post-war years seemed to have calmed matters a bit. At least not on the scale of the events that precipitated the civil war. But then Buhari came.

In those days following the war, Nigerians largely coexisted peacefully in various parts of the country. In the north, the Igbos felt at home and lived there as though it was their home. They invested, they married from there and they became a part of the place.

It was indeed fun to be in the north. In my earlier years I used to relish making journeys up north. Life there used to be simple, cheap and fun. The host community welcomed strangers and there was peace. Occasionally though, riots broke out after which things returned to normalcy.

The herdsmen of those days were interested only in their cattle. Their cattle grazed the fields across the country and the herders respected their host communities. There was peace. No clashes erupted as such and when the cattle trampled on people’s crops the matter was settled without noise.

Our Hausa brethren were all over the place here, mostly as private security people popularly known then as ”watch nights”. I remember one of such watch nights in our yard in Enugu then called Musa. I and my fellow kids would crowd round him under the stair case where he stayed and listened to his tales. He was part of us and we were part of him.

It wasn’t as if everything was perfect though. Far from it. But then the quality of life was far better. The problem wasn’t feeding. I remember that most Sundays, families exchanged visits. It didn’t matter the number of people any visiting family came with. Food would always be served and everybody ate. But these days, I’m sure some families will quickly hide what they are eating if they see some visitors coming. The economy of the country has made it so. How can you be sharing food with others when you have barely enough to consume?

But in those halcyon days life was so sweet and simple. I remember how the few families who had black and white television sets didn’t mind when others trooped into their parlours, as we called it then, to watch popular programmes like Zebrudaya and Ukonu’s Club. They would also go there to watch Rangers and the Green Eagles play. In fact, the day Mehalla of Egypt played against the then almighty Rangers International of Enugu, only three families had TV sets in our entire street. The rest of the people poured into their parlours to watch the match. They screamed and danced when goals were scored. Nobody was sent out for doing that.

There was an almost regular supply of electric power. This enabled people to watch programmes that had episodes. Oh, how I miss those days!

But with the passage of time, things began to go bad and they continued to go bad until the scale began to fall off the eyes of the rest of Nigerians who queried why only a section of the county should be leading others. Nigerians began to be more aware of what separated them instead of what united them. But they somehow managed to hang on.

And then Buhari came.

In his five years at the helm it is safe to say that Nigeria has never been so acutely divided along ethnic and religious lines. Buhari made history as the first leader under whose care we fell apart as compatriots. Bloodletting became the order of the day, with those behind it getting presidential protection.

Today Nigeria faces the twin terror of Boko Haram insurgency and the menace of Fulani herdsmen. While the former affects only the north, virtually; the latter affects mainly the southern part of the country and middle belt.

The case of Boko Haram is particularly interesting. When it started around 2009, the belief by northerners; mostly their elite, was that the Boko Haram members were targeting only infidels and non-northerners, especially people of the South East. So they kept quiet and refused to act.

However, that monster eventually grew out of control and started developing a thirst for every blood. Thus they began to attack mosques and fellow northerners. It was then the northern elite who had kept others around them in perpetual servitude, began to get worried. With time, their worry turned to alarm, but it was too late. Today Boko Haram has become a part of northern life which has rendered the places where they operate desolate. A pity for the innocent people there who cannot afford to jet out to Abuja.

What about the Herdsmen? This group is behaving the way the northern elite want them. They are going after others outside the core north; ravaging and plundering everything in sight. The cries of the victims mean little to those in Aso Rock and rather than rein in the killers, they are giving them millions in the name of negotiation which has proved to be ridiculous and ineffective.

But then, these things didn’t happen without pressure piling on the service chiefs whose duty it was to stem the tide. Nigerians called for their sack but the FG kept mum until the ultimate damage had been done. That is why Buhari deserves no applause.

Now that Buhari has deemed it fit to change them, does it mean he is ready to do what he should have done all these years against those destroying life and property in the country? This is a question only Buhari can answer, for if he doesn’t want to tackle this issue, the new service chiefs will merely find themselves as pawns in the hand of their master.

But if Buhari wants to make amends we can expect the new helmsmen to start arresting the killer herdsmen, have them prosecuted and jailed or killed. It is the only way those killers can be reined in, knowing that the honeymoon is over.

The task, therefore, before the new service chiefs is to prove to Nigerians that they are different from those they replaced by doing the needful against those holding the rest of the nation to ransom.

I would have said they should resign if they find themselves acting as mere rubber stamps, but I realize that we are in a part of the world where the perks of office are stronger than anything else. And in that case, there’s nothing to do than keep our fingers crossed and hope for some miracle; that expectation of miracle that has made many Nigerians slaves to fake pastors and churches.