Following the peaceful conduct of the just concluded National Youth Council of Nigeria, NYCN, Anambra State Chapter election, the newly elected chairman, Surveyor Emeka Obi Chukwudi, has hailed Gov ChukwumaSoludo for his love for youths, as well as for providing the enabling environment for NYCN’s activities in the state.

Speaking shortly after he was sworn-in as the number one youth in Anambra State, Surv. Chukwudi expressed gratitude to God for His mercies and grace, which, he said, were his driving force and source of inspiration.

He thanked everyone who played one role or the other for the success of the election, especially the Eleco chairman, Comr. Nnamdi Malive; National Legal Adviser, Barr. Bashir Garba; and the Returning Officer, Comr Temple Chika Chinedu (former chairman, Enugu State).

He equally expressed gratitude to GovSoludo, who, he said, through the deputy governor, Dr. Onyekachukwu Ibezim, who worked tirelessly day and night to see to the success of the election after many postponements.

‘If not the help of Dr. Onyekachukwu Ibezim who stood his ground that there should be no further postponement and that this election must hold today and concluded, this election would not have held. I and my excos, and, by extension, the entire youths of Anambra State, cannot thank him enough. 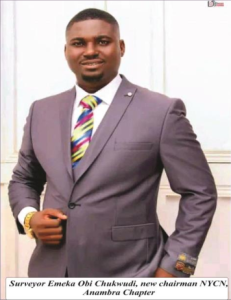 He also thanked the Commissioner for Youth Empowerment and Sports Development, Hon. Patrick Agha Mba, who, he said, ensured that theprocess was free and fair.

Obi Chukwudi assured the governor of the support of the Youth Council towards achieving the set goals for the youths of Anambra State as outlined by the government.

‘I am forever indebted to the national body led by Amb. Sukubo Sara-Igbe Sukubo, and his very capable executive here present, who through the admirable leadership of the Vice President, South East, Amb. Sir. Smart Uwakwe, KSJI, sacrificed their time, resources and nights, just to put to bed, the process of electioneering, in making sure that the 2022 Unity Congress of National Youth Council of Nigeria, Anambra State, became a reality, the new NYCN said, while appreciating the roles of the Eleco, CPC and other personalities like Amb. Innocent Nduanya, deputy president, NYCN; Hon Nwabufo Nwankwo and Comr Frank Maduka, as well as Comr. Samuel Egwuatu.

‘My gratitude goes to the coordinators of the local government chapters whose doggedness in their decision was pivotal to this transition and their various community reps who were patient enough and contributed in one way or the other in unifying the Council and making sure that the overall interest of the people was protected as the election lingered. I congratulate you for your resilience,’ he said, while promising to ensure an inclusive administration.

He also praised the efforts of the VYOs, CBOs, FBOs and his family and organization, the Man O War; just as he expressed gratitude to the leader and pioneer chairman of NYCN, Anambra State, Comr. Obunikem Asuzu.

The names of other elected executive members are: