But that wasn’t all about his hubris. He came in charging like an enraged bull against the man that helped in making him governor, Peter Obi. In the early days of Obiano, anyone who proved he had an axe to grind with Peter immediately became a friend of Obiano, while those seen as Peter’s allies became Obote men; those to be hunted and not be seen in government house premises. It was that bad.

Just why Obiano was so besotted with fighting Peter is what I have not fully grasped unto this day. But once some wolves noticed that disparaging Peter was the magic wand that unlocked Obiano’s heart, they moved in and what a job they did! 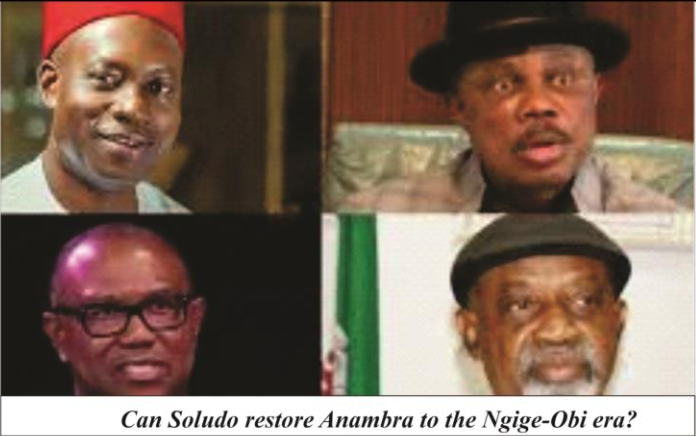 Often times the state owned radio became an instrument of maligning Peter through sponsored documentaries. Very soon, those people began to be given appointments as rewards for doing nothing but disparaging Peter. That was mistake number two.

As the days turned into months, it slowly began to be known that Obiano was not truly in charge of his government.

His government was not just hijacked by one person but by many, to the extent that it became difficult to ascertain who was who. This is not even factoring in the influence of the ”First Lady” in that government.

On top of that, Obiano himself would appoint many people to do same job and that was for those who even bothered to come to work. The majority stayed wherever they were and kept receiving alerts. Any attempt to tackle Obiano on this anomaly brought his wolves attacking the person.

To them, Obiano was the long awaited Messiah who could do no wrong. The man in question drank their praise and was ever ready to do more. He seemed to throw caution to the winds and forgot to save for the rainy day. For him, eight years seemed like a life time away. Mistake number three.

But, as in all things in this mortal world, the end was bound to come. That was when the reality began to dawn on him that after all the razzmatazz he could indeed have questions to answer, especially after the Economic and Financial Crimes Commission, EFCC, fired the first warning some time last year, at Obiano to the fact that he was on their watch list. Any wonder that the pictures of him in the last days had him looking rather forlorn.

He had often told people around him about his ability to see what they were not seeing. Could it then be that in those last days he was seeing the trouble that would later befall him immediately he lost his immunity?

Indeed, like him or not, if what has kept coming out about how much Obiano actually left in the coffers of the state is true, one will be right to be angry. After Gov Chukwuma Soludo had first revealed that only about N300m to N400m was left in the coffers as at the last audited account of the state which was in December last year, news later emerged that what was truly left behind in cash between January and the handover day was, wait for it, N1.4 million! When I first heard it I found it difficult to believe but I was referred to one house of assembly member for confirmation. Before that day ran out I began to hear same from many other sources, but even now, I’m still trying to believe it.

But whatever the case, Obiano did not do himself a world of good and this is why it is becoming very difficult for many people to defend him, save, perhaps, those who took part in the bazaar that were the Obiano years.

You see, I’ve always described Obiano as a good man, or rather, a kind man. But then, good governance is not measured by kindness alone but the ability of the leader to be prudent, sagacious, assertive and visionary. The sad fact is that Anambra in the last eight years had been run like someone was a Father Christmas without a look at the purse of the state and see where that has landed the state?

And to worsen matters, Obiano, I’m sure, was not aware of some of the deals that went on behind his back or in his name. But then there is this thing called vicarious responsibility and now he has to answer for those people who have quietly withdrawn to enjoy their loot, leaving Obiano to carry the can.

In all this, it is clear that Obiano failed to learn from Chris Ngige and Peter Obi who were before him. Anambra has always been a complex state to govern and the leader has to deal with many factors at same time. Last week I did compare Obiano to an earlier governor in this state, Chinwoke Mbadinuju, whom I described as another kind man.

I also noted that Mbadinuju lacked steel or strong will and was thus easily manipulated by those he appointed. But unlike Obiano he was not charged with corrupt practices after leaving office.

Since the Obiano saga began, I’ve always tried to make it clear that only Obiano can save himself; not the people shouting on the streets that he built this and that. Granted that he built those things, what the Economic and Financial Crimes Commission are after is for Obiano to account for his stewardship and throw light on some grey areas they have pointed out. This is just what is needed.

But the snag was that as he did so, many interests also partook of the state’s resources which they shouldn’t have. This contributed in no small measure to the cul-de-sac the state has presently found itself in.

Thus, the matter has passed the stage of sentiments. He has to convince the EFCC that he governed above board. If he fails to do so, he will go in for it and it won’t matter if all the priests and party chieftains line up in his defence.

But then all those calling for his blood should also bear part of the blame for failing to either call him to order or vote him out when the opportunity presented itself. Elections are held periodically for the people to use their powers to retain a good government or reject it.

If they fail to do that, then they should keep quiet. In fact, had all these people jumping to his defence today told him the truth, perhaps he would be free of blame today. Rather, they were busy painting those who tried to call him to order black.

Now, Soludo will be inheriting a highly indebted state. He said the state had a deficit of hundreds of billions. Where will he get the money? This is what those shouting how innocent Obiano is should concern themselves with.

Today the state’s retirees have been owed gratuity since 2017 and Soludo is expected to clear that. Will he turn to a magician to do that? Today the roads across the state have all collapsed and in need of fixing. How will the money for that be raised? Contractors are being owed and they expect their money. Will it fall like manna from the sky? I hear that many of the state’s assets were also sold; how are they going to be recouped?

Thus, it is not about pointing at the airport or conference centre which I once described as luxury projects instead of priority projects. This is so because you cannot have the problems earlier enumerated and abandon them because you want to have ”legacy” projects which many are now beginning to suspect were hurriedly done to justify the huge debt burden the state is carrying today.

Much of the state’s money was tied to that airport project, leading to other critical sectors like roads being ignored. Why the haste to complete the airport when government is known to be a continuum? Why not leave it for his successor to complete? Why waste money on a conference centre that will not yield immediate money to the state? (I won’t even mind if that place is turned to a shopping mall.

At least it will yield massive IGR for the state). Why not develop Dora Akunyili Women’s Development Centre which already has many facilities like hotel and stadium and use the balance to tackle other critical areas?

I once raised these questions but was seen in some quarters as being over critical. Now what is happening? Before I learnt about the state’s debt burden, I had even hailed Obiano for not doing too badly and for governing with a human face. But I now know better.

To me, apart from Obiano’s certain naivety about what governance entails, the people that should bear the greater blame are those who egged him on, while targeting the resources of the state; those people who encouraged him to spend valuable time going after his predecessor, rather than delivering on his mandate. Indeed, one of Obiano’s undoing was abandoning Obi who would have helped him to navigate the tough times.

As Soludo comes aboard, I advise him to waste no time in using a big broom to sweep out all those who deceived Obiano, even if he has to borrow the broom from APC.

I’m happy that Soludo has started well and also showing he would be in charge of his government. His renewed friendship with Obi is also welcome. It shows his maturity. We owe it as a duty to help Soludo succeed, especially in these trying moments. But as we do that, let’s pray that NEVER AGAIN should what happened in the last eight years be repeated.