Near Total Breakdown of Security in Southeast

The once serene environment of the Southeastern part of Nigeria is now a shadow of its old self, no thanks to what can be described as the near total breakdown of security in the zone.

The situation has gotten so bad that hardly a day passes without news of the shooting and killing of police personnel and civilians or their abduction. It has never been this bad in the Southeast Zone.

The border communities appear to be the major targets of these criminal elements, chiefly because they afford them easy escape routes.

In Anambra State, such areas as Ufuma, Umunze, Ihiala and Azia axes have become major targets because of their proximity to other states.

In neighbouring Enugu State, the attention of the hoodlums has now shifted to the area known as “Four Corner”. It is located somewhere in Oji River and is known for its dense bushes. Within the past ten days three attacks have been carried out there by believed Fulani herdsmen. Many travellers have been kidnapped at this spot. What is very worrisome though is the inability, or is it refusal, of the security agencies to mount regular patrols there, despite the outcry of travellers who pass there.

Back in Anambra, kidnappings have been going on within some lonely roads. Just recently a journalist and his wife were kidnapped along the Nimo-Neni Road. These roads within the state are also known for the regularity of such crimes there. But it is as though the security agencies are feigning ignorance of what goes on in such places.

Even where the soldiers or police mount road blocks, they have been attacked and killed by the hoodlums. This has turned Anambra into one hell of a place to live; just as in other parts of the Igbo Nation. 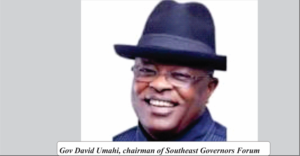 This is not good enough, especially as the Yuletide approaches. It is known that more and more people from the Southeast Zone now prefer to hold some activities outside the state, such as traditional marriages, weddings and even funerals, for fear of attack. The worsening security situation may likely discourage people from coming home this Christmas.

We have observed that part of why these crimes have prevailed is because of the absence of collaborative effort by the governors of the five states of the Southeast.

It was not long ago that they resolved, at a meeting in Enugu, to form a joint security patrol to be operating along the major roads. We urge the governors of the zone to expedite action in this regard to protect the lives of the people entrusted in their care. We believe that a regular joint patrol of the roads by the joint security forces will minimize the incidences of kidnappings and killing of security personnel.

We will however wish to quickly advise the security operatives manning the various road blocks to be eternally vigilant in order not to be taken by surprise. We advise this because we have noticed that the high success rate of the hoodlums against the security personnel at road blocks is because most times those personnel are more interested in extorting money from commercial drivers than in being on the lookout for trouble. This makes them vulnerable to surprise attacks.

They should also avoid bunching themselves together to avoid presenting themselves as easy targets. They should at all times conduct themselves professionally in order to deal with any emergency. The constant killing of security personnel can only succeed in dampening the morale of ordinary citizens.

Finally, we urge the security agencies to reclaim their space and put the hoodlums on a permanent retreat. The governors of the Southeast Zone should play their part by adequately supporting the security agencies financially and by giving them such added incentives as bonuses for successes against the hoodlums, while rewarding the families of those who pay the supreme sacrifice.

It is time to deal ruthlessly with these hoodlums once and for all before the Southeast Zone is overwhelmed by criminals.