Ndigbo, not Known for Killing

In line with Anambra State Governor, Prof Charles Chukwuma Soludo’s plea for all churches throughout the state to hold Mass and church services to end the Monday Sit-at-Home strikes simultaneously last Monday by 11am, the Catholic bishop of Awka Diocese, His Lordship Most Rev Paulinus Ezeokafor, led the religious and laity in a Holy Mass to pray for peace in Anambra State and South East, report Jude Atupulazi and Mmaduabuchi Onwumelu. 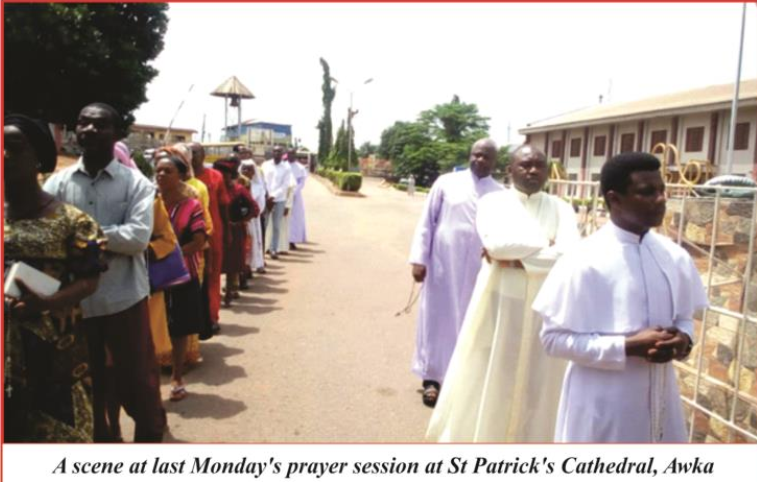 Speaking shortly after the Rosary Procession which preceded the Benediction at St. Patrick’s Catholic Cathedral, Awka, Bishop Ezeokafor cautioned youths against violence while pursuing a legitimate cause.

He regretted the spate of insecurity in the South East Region and Anambra State in particular and noted that the culture of violence was alien to the Igbo people.

The Catholic prelate who explained that the Church believed in the efficacy of prayer, especially with the understanding that the insecurity in the South East Region now demanded God’s intervention, advised young people to desist from using violence to pursue legitimate causes.

He acknowledged the marginalization of Ndigbo was glaring despite their numerous contributions to the betterment of Nigeria before and after Independence and post-civil war but stated that it was strange that someone who was being marginalized would allow his home to become a place of ruins and desolation.

Bishop Ezeokafor stated that dialogue remained the most important tool to resolve any form of crisis. 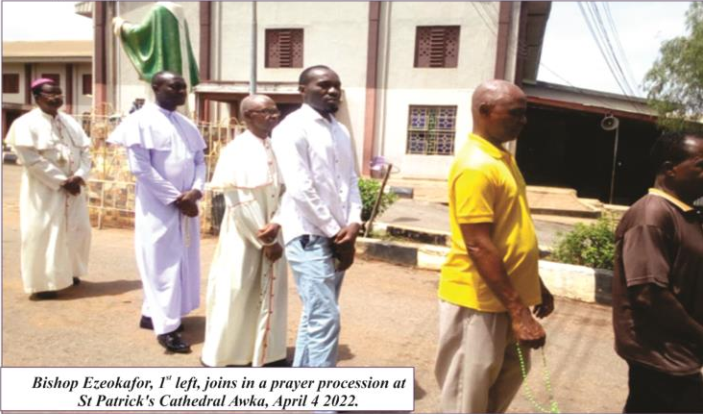 The prayer came on the heels of a stakeholders security summit in Awka, April 2, where Governor Chukwuma Soludo urged all churches in the state to conduct a one-day prayer session last Monday to seek God’s intervention on the spate of killings in the state.

The governor also said the aim of the prayer was to bring an end to the Indigenous People of Biafra’s (IPOB’s) sit-at-home order which, he said, had been taking a great toll on the economy of the state.

He explained equally that the prayer session was against those hiding under IPOB’s name to wreak havoc in the state.
Speaking during a stakeholders’ peace meeting with Security Chiefs, traditional rulers and religious leaders at Prof Dora Akuyilli Women’s Development Centre Awka, Soludo also said the move became necessary to seek spiritual solution to the challenges currently affecting economic activities.

He implored citizens and residents of the state, as well as all religious congregations, to join in the important day of prayer expected to take place within the premises of cathedrals, churches and prayer houses across the state and beyond.

‘I enjoin you to pause and join in fellowship as we seek the face of God. It is expected that the conclusion of the prayer session shall mark the end of Sit-at-Home in Anambra State,’ Soludo had said, noting that the sit-at-home order was ill advised and counter-productive, as well as not being a solution to the release of the leader of IPOB, Mazi Nnamdi Kanu. He said moves were being made to ensure a speedy resolution of his detention.

‘Every Monday is a very important day to Ndi-Anambra and the government. Anambra loses millions of Naira as a result of the order,’ he said.

Soludo announced plans to establish a registration centre to rehabilitate touts, illegal tax collectors and other criminal elements and empower them to become useful to society.