Ndigbo and the Nigerian Question

Last Tuesday morning, I was driven by the spirit to put up a hurried write up about the place, fate and future of Ndigbo in Nigeria. It was intended as a brief reaction to a social media post in which the president general of Ohaneze Ndigbo World Wide, Ambassador George Obiazor was seen addressing Igbo marginalization in the country. But my response ended up taking so much space and equally elicited so much reaction that I had no option than to republish it here.

Indeed, talking about the treatment of the Igbo Nation in Nigeria is one topic that is bound to have one writing effortlessly. Why not when the writer is a victim of that injustice and lack of fair play? That was why I ended up writing with so much passion and gusto.

Truly, whenever I see where the country is headed, I regret not having left the country at a younger age. But having failed to do so, I can only stay and probably let my children leave if they want to. It is always saddening that a country that is blessed with enough man power and natural resources will be so backward and bereft of ideas.

It is worse when one realizes that our backwardness is man-made. We live in a country where the pursuit of the shadow is seen as more important than pursuing substance and it has not helped by the recycling of brainless leaders who have refused to give a chance to others more capable.

Every ethnic group in the country is blessed with smart and intelligent people but the problem has been that the smart ones are not given any chance by the thieving cabal.

You see, when it comes to stealing, the thieves in power do not discriminate. They don’t care whether Mr A or Alhaji B or Otunba C comes from a different ethnic nationality. They are always united by their greed. But when it comes to sharing of power, they suddenly remember that one of them is not fit to have it.

That one has always been the Southeast. While they are content to make use of Southeast renegades to divide the region, they quickly draw a line which such renegades should never cross but such attitude has not helped the country as her best hands have been shunned over the years.

There’s no doubt that some of these best hands reside in the Southeastern part of the country but being that they are conveniently regarded as a defeated people after the war, nothing comes their way in what seems a grand conspiracy. 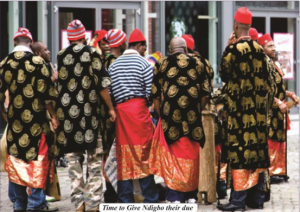 But then, Nigeria has been the greater losers for her treatment of Igbos than the Igbos themselves. Imagine, for instance, where Nigeria would have been today technologically if she had used the technological genius of Igbo wartime engineers who did wonders during the unfortunate civil war during which time they produced guns and armoured tanks.

But out of either envy or hatred, those geniuses were let to die with their ideas. Today, the country is yet unable to produce a pin and has remained consumers, rather than producers. Still, even now, the country hasn’t learned her lessons. Imagine the industrial cities of Aba and Nnewi being excluded from the national rail project while a Daura that has no economic value was included, with the project even crossing the border to Niger Republic. What about the largest commercial city in Nigeria, Onitsha? These are cities that should have been number one on any economic blueprint list in the country.

This is no attempt to whip up ethnic sentiments. I’m not one who does that. But a time comes when the truth must be told.

Even now as the country readies for general elections, of the three major presidential candidates, it is beyond dispute that the best is an Igbo man whose geographical zone is also genuinely supposed to take the slot.

Obi may not be the best Nigerian but he’s definitely head and shoulders above his other two opponents – no disrespect. Obi has so far been the only one recognizing, addressing and providing solutions to the core issues pinning Nigeria down, while the others are either flexing their financial muscle or shouting about how it is their turn after helping to install the incumbent president as if the country’s presidency has become a business of settlement.

Deep down, every right thinking Nigerian knows the best candidate at the moment, but some will still pander to the whims of ethnicity and thus continue to either suffer or make others suffer. Yet, when Ndigbo want to be allowed to no longer be part of this oppressive entity called Nigeria, they’re refused. Any wonder at the Biafra agitation? I’m only against this agitation because of those in charge and their modus operandi.

But I blame Igbo leaders. Having seen that there’s no place for them in the country, they should have long drawn up a programme for developing the Southeast and creating a solid economic bloc which will see the Igbo Nation existing and progressing independently, while still part of Nigeria. But base political sentiments and selfishness borne out of greed by our leaders have put paid to such a programme.

Yet, if there’s any zone that has displayed true Nigerianness, that zone is the Southeast and her people who are not only found everywhere but are very positively contributing to the growth of those places; sometimes even more than their hosts.

As I said, I’m talking about facts which everybody can attest to. If really Nigeria wants to grow, the Igbos, especially of the Southeast, should have been given a fairer and much better deal. But we have a system which is averse to progress.

Despite the experience of Ndigbo in Nigeria, their towns and villages remain the most developed and this is mostly without government’s intervention. In Neni, a village in Anambra, an individual asphalted every single road in the community. This can only happen here. Go to Abiriba in Abia State and see why it is called Small London; yet it is only but a village.

Again, the average Igbo person is very accommodating. Before the renewed Biafra agitation, no stranger in Igbo Land could complain of being harassed. The average Igbo man will sooner do business with a total stranger than with his own kit and kin as long as it will favour his business. Igbos always go for excellence.

It is therefore tragic that such a wonderful people are suffering from what obviously is a calculated ploy to eternally subjugate them. But ironically the country is rather subjugating herself. Individually, the Igbos are largely better off. They’ve been thriving amid man-made obstacles and will continue to do so.

Nigeria, this is yet another opportunity to reflect deeply and embrace the truth. Every other African country has virtually overtaken us. We’re merely paper giants. Look at the power sector. We were better off in the 70s than now, a development that shows we’ve been on a downward spiral.

Every other sector is on life support. Yet in every national election we often go for our worst, rather than our best. This has led to the emergence of a rich individual few and a poor majority. Today, however, that society we have abused is coming back to haunt us.

Today Nigeria is in a shambles and looking to crash. But our leaders are dancing owambe while the ship of state heads to the rocks. It is time to wake up but that waking up must have justice, equity and fair play as part of it without which we will continue the pretence.

The time has come for all Nigerians of good conscience to allow these industrious people called Ndigbo a chance to prove their mettle without even seeing it as a favour. Indeed, if others have been trying and failing, who says the Igbos will also fail? At least, as they say, there’s no harm in trial.