The 2020/2001 Premier League Season was concluded last Sunday, and Fides Media analyzed complete sports appraisal of the standout players in the entire campaign in a team of the season format.

Augustine Akhilomen x-rayed the best Premier League 11 of the season and below are the top eleven. 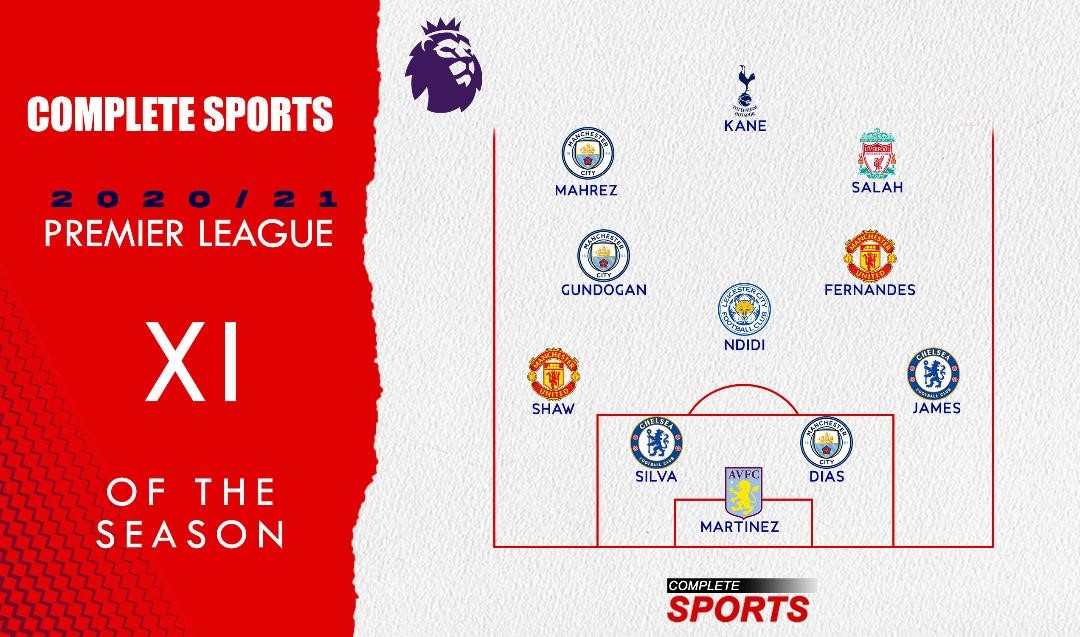 He could be regarded as Aston Villa’s best player of the season considering how he single-handedly helped the team with some crucial saves this season.

The shot-stopper signed from Arsenal during the January transfer window has quickly become an important part of Dean Smith’s much-improved team.

There is a reason why Silva is regarded as one of the best center-backs of the past decade his physicality and his prowess in the air are superb. He displayed such prowess for the Blues in the concluded 2920/2021 Premier League season, scoring one goal and making countless timely tackles to protect the backline.

He formed a strong partnership with Antonio Rüdiger and has been of true leadership of the Chelsea team till their last game against Aston Villa, where the team narrowly picked a top four ticket for Europe next season.

Undoubtedly the best signing of this Premier League Season, Ruben Dias has had a Van Dijk-like impact on Manchester City’s defense. The Portuguese center-back always seems to be in the right place at the right time and has been an integral part of Manchester City’s strong performances this season.

Arguably the best center-back in the Premier League at the moment, Dias has been extremely solid defensively. Excellent in the air and brilliant on the ball, the 23-year-old star has cemented his place in the Manchester City set-up.

Big, strong, and reliable, James played a key role in ensuring that Chelsea’s backline remains solid. His ability to overlap and make a quick return to his position makes him a perfect choice for Blues manager, Thomas Tuchel.

His work rate can’t be questioned as he has shown his fearless attitude against big-name players in the Premier League and most especially in the Champions League.

The back four is full of redemption stories, with Manchester United’s Luke Shaw capping it off at left-back. Shaw has been one of United’s best players this season and has earned his way back into the England squad as a result.

The 25-year-old has played a direct hand in more goals than any other defender in the Premier League in 2021 and has remarkably created the most goalscoring chances (36) in the division.

The Germany international is another Manchester City star that proved critics wrong after a poor start to the season. However, he has proved doubters wrong as he marshalled the team’s midfield with so much maturity and confidence.

Gundogan is one of the most complete midfielders in the Premier League, capable of breaking play, setting up chances, and even scoring goals.

The 30-year-old midfielder scored 13 goals this season and was extremely consistent with his performances till the team won the Premier League this season.

It continues to amaze that no big club has taken a serious look at Wilfred Ndidi, as he continues to grow from strength to strength for Leicester City.

Since joining Leicester in 2017, the 24-year-old has gradually established himself as one of the best defensive midfielders in Europe.

Despite Leicester City narrowly missing a place in next season’s UEFA Champions League, the Nigeria international played an integral role in ensuring that they won the FA Cup this season.

No player made more tackles and interceptions combined than Ndidi in the Premier League in 2021 (96), with the defensive midfielder even turning creator of late with four assists.

The man who has almost single-handedly transformed Manchester United into an elite side once again, Bruno Fernandes is arguably the best player in the Premier League at the moment.

An inspirational figure in the Manchester United dressing room, Bruno Fernandes has had another amazing season and has already put up some astonishing numbers.

In 37 Premier League appearances in the 2020/21 season, the Portuguese superstar scored an incredible 18 goals and grabbed 11 assists. Manchester United will be hoping that Fernandes continues his good form as they face Villarreal in Wednesday’s Europa League final.

Man City’s Mahrez made this season his own with some self-styled football that ensured the Citizens won the Premier League. After a slow start to his campaign, the Algerian star grabbed the headlines with some fantastic display most especially in the last 10 games that sealed the team’s victory in the domestic scene and also qualifying for the final of the UEFA Champions League.

The Algerian forward/winger/attacking midfield maverick – call him what you will, was the Premier League’s most rampant attacking threat with 9 goals in 27 Premier League games and 6 assists.

Mahrez appears to telegraph what he is going to do before he does it. Yet still has the creative ability to carry out his intentions while defenders are left scratching their heads when they knew what was coming.

The 28-year-old superstar has been linked with a move away from Liverpool in recent weeks, but it has not slowed him down in front of the goal.

No doubt, Salah was instrumental in ensuring that the Reds finished the season third on the log and a place in next season’s UEFA Champions League.

Take Robert Lewandowski and Erling Haaland out of the equation and Kane is the best striker on the planet. Even with the two Bundesliga goal scorers, Kane remains firmly in the conversation each season with his consistent finishing form and ability to help keep Tottenham in the mix.

This season, the 27-year-old has been at his usual prolific best scoring 23 goals in just 35 appearances. A player who is always willing to work hard for his team, Kane’s link-up play with Son Heung-Min has been exemplary.

At 27, the Englishman is at the peak of his powers and has been linked with a high-profile exit.