Priests and lay faithful of Nanka Catholic Community, among others, last Monday, June 27, joined in prayers and Mass for the happy repose of the soul of the 11th indigenous Catholic priest of the town, the late Rev Fr Paul Chinwike Ezejemegwa. It was on the occasion of month’s mind and funeral ceremony for the deceased.

The late Fr Zion, who was also a legal practitioner, served as a priest at St Sylvester’s Catholic Church, New Nyanya, Nasarawa State until his death. 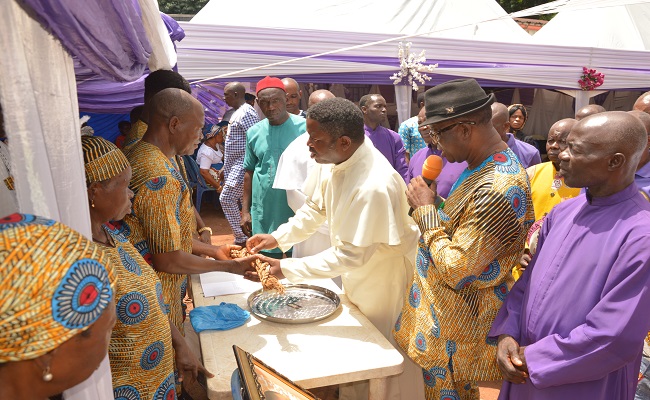 In his homily, the parish priest of St Patrick’s Parish, Owere-Ezukala, Orumba South LGA, Anambra State, Rev Fr Simeon Okafor, described a Catholic priest as a victim of sacrifice, who all he had, including his wears belonged to the Church.

According to the homilist, who cited the case of St Anthony of Padua, the belongings of the priests, were relics which belonged to the Church even after death. He explained that acts of charity to the priest, which included monetary donations to support a sick priest, were gifts gave to the Church, and not to the family.

The homilist, advised all of the need to leave judgment for God, who he said, the dead was with at his last moment, insisting that judgment belonged to God.

Rev Fr Okafor, who is also an indigenous priest of Nanka, thanked God for the last moment reconciliation which the deceased had with his family before his death. This was even as he advised the living to amid family crisis stand out for the truth and peace, and not to harbor cases which according to him would disrupt family peace.

He eulogised the late Fr Ezejemegwa as a social person, who according to him, treasured his friends and stood by them.

In his remarks, the host parish priest of St Michael’s Parish, Nanka, Rev Fr Herbert Ezeji on behalf of the vicar, Rev Fr Philip Okoye and the parishioners, thanked God for the gift of the late Fr Zion, who he (God), had called back to the bosom.

The bereaved family through Mr Martin Ezejemegwa, thanked the Bishop of the Catholic Diocese of Ekwulobia (CADEK), Most Rev Peter Ebere Okpaleke, for the huge efforts and sacrifices which he said, the Church made in a bid to save the life of the late priest after the accident he had on May 23, 2021.