Naija we can: Obi gets diaspora support

In 2003, the Peoples Democratic Party, PDP, held sway in Anambra State, with a certain political godfather pulling the strings and determining who got what position or did not. The party was so strong and so deeply entrenched in the state that it was inconceivable that any other party, not to talk of any single man, could challenge it.

But from the blues emerged one Peter Obi, then chubby faced and looking as innocent as a priest newly ordained. He was first noticed on billboards spotting a white shirt and a tie, asking the question: ‘Are we cursed or are we the cause?’ That was a kind of unique campaign method which quickly captured the attention of many who wanted to know more about this man with a strange style.

It did not take long for his fame to spread like wild fire as the Anambra masses rallied round him, even in a new and then structureless party, called the All Progressives Grand Alliance, APGA. But despite Obi’s popularity, not a few wondered if that popularity could translate to electoral victory. Even the party in power, PDP, must have laughed off Obi’s growing popularity, no doubt believing in the power of incumbency to retain power. 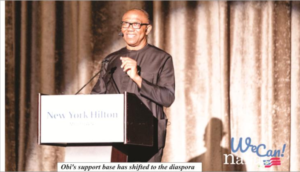 But that was not to be as come the election day, Obi swept through the various local governments and wards like a hurricane to record an unprecedented victory. His victory was however delayed as the PDP cowboys brazenly stole his popular mandate.

History was however made when, close to three years of legal war, Obi reclaimed his mandate. Today, nearly twenty years after, Obi looks set to replicate his 2003 feat in Anambra at the national level. Just like in 2003, Obi is contesting to be president of Nigeria on the platform of a party without a structure (according to politicians).

Under the Labour Party, Obi is mounting a daring challenge against formidable opposition, with many not giving him a chance at the beginning. Today, though, that is changing to what looks like a begrudging acceptance by the opposition that, indeed, Obi’s aspiration is real.

The support from across the country for his aspiration has been nothing short of amazing, a development that Obi himself is still finding difficult to fathom. But just as Nigerians at home are rooting for him, those abroad are not left out, with many groups eager to participate in the project.

Enter, Naija We Can, a non-profit 527 America based political organization focused on good governance in Nigeria. This group, a first of its kind Nigeria-focused political action committee (PAC) founded by U.S. based Nigerian professionals, is seeking to reach one hundred thousand Nigerians in the diaspora in support of Peter Obi, whom it describes as a candidate electrifying young Nigerians and as a powerful force ahead of Nigeria’s presidential election next February. The group further describes him as energizing voters with messages of prudence and accountability that are amplified by an army of social media users.

In furtherance of their support, Naija We Can recently partnered with Columbia University’s Africa Business Club and Black Law Students Association to host Mr. Obi in New York for what it dubbed ”A Conversation on Afro Economics & For Immediate Release, Nov. 7, 2022 Government Policy.” The event was hosted at the Midtown Hilton and had over 1,500 guests in attendance.

According to Conway Ekpo, a successful New York FinTech lawyer, who serves on the Naija We Can Board, his group seeks to empower Nigerians in the diaspora to change their country’s political and economic fortunes through campaign finance and thought leadership.

For Dr Hadiza Osuji, a member of Naija We Can Board, ‘Peter Obi has pledged to ensure that diaspora voting is permitted if elected Nigeria’s president next year, in February 2023. Despite annual calls for its implementation, Nigerians in the diaspora are barred from voting. Naija We Can hopes that this will change if Obi and his running mate, Senator Yusuf Datti Baba-Ahmed, are elected.

‘We know the road won’t be easy, but we want to do everything we can to help the country by ensuring the right leaders get elected.’ Dr. Osuji is a successful university educator in New York and non-profit director focused on African immigrant families and communities.

Clearly impressed by their efforts, Mr. Obi took to his Twitter page to ‘Thank Naija We Can and the Nigerian diaspora who are backing their hopes of a better Nigeria by supporting the Obi/Datti ticket’ and encouraged his 2.4 million followers to impact change by visiting the Naija We Can website, where individual donations can be made to Mr. Obi, ranging from $25 contributions to $2500 or more.

‘With $20 billion in diaspora home remittances in 2021 alone, Nigerians in the diaspora have contributed to nearly four times the amount of foreign direct investment into the country,’ said Naija We Can founder, Nexus Sea, a litigation and trial partner at a top ranked New York law firm.

His words, ‘Our goal is to help convert the diaspora’s economic power to political might by ensuring that Nigerians in the diaspora have a strong voice in selecting its leaders. Next year’s elections are critical and too important for us to sit on the sidelines.’ 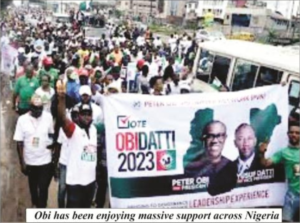 Naija We Can’s efforts have not been met without some people in the country, including opposition parties, questioning whether it would be legal for Nigerians in the diaspora to get involved in Nigerian elections.

However, according to Godson Ugochukwu of the Lagos-based law firm, Fortress Solicitors, ‘While Nigerian political parties are barred from receiving funds from outside Nigeria, Nigerians in the diaspora can lawfully make monetary and other contributions to a candidate in an election, provided that the contribution is not more than N50 million.’

Mr. Ugochukwu is a strong supporter of Obi and currently serves as Naija We Can’s pro bono counsel.

From Liverpool, United Kingdom, to Richmond, Texas, Naija We Can’s diaspora donors have come from across the globe. According to a founding board member and U.S. trained pharmacist, Everist Njeze, ‘Our goal is to encourage as many small donations as possible, which in the aggregate, could make a substantial difference in the outcome of the upcoming Nigerian elections next year.’

He said while donors are free to donate as low as $5 USD, the average donation directed to Mr. Obi through Naija We Can currently sits at $169 USD.

‘Naija We Can’s formation is evidence of a politically engaged Nigerian electorate, both at home and abroad, that is eager for change and no longer satisfied with the status quo,’ said Naija We Can Board member, Emeka Chinwuba, a finance partner at a top U.S. law firm, who stated that it was the logical next step in Nigeria’s political evolution.

The man at the centre of it all, Peter Obi, says, ‘Working together as one, all things are POssible!’

Naija We Can, for its part, has pledged to help the diaspora Nigerians to make a difference by working as one toward a common purpose, with interested parties being directed to visit their website: www.naijawecan.org.

No doubt, Obi’s aspiration to lead Nigeria at this point in her history is continually looking like another historical endeavour. For the first time, the youthful elements of the country, noted for their apathy in political matters, are the ones championing Obi’s surge to Aso Rock.

Right from when registration of voters was going on, they had led the charge and were seen at many registration points patiently queuing up to be registered. After that they had embarked on mobilization marches across many cities in the country, mustering unprecedented crowds to the surprise of both supporters and non-supporters of Obi.

Their insistence on changing the nation’s status quo is increasingly making it look like a sharp departure from the past when they disappeared on election days, leaving the older generation to decide their fate for them.

It can be said that the roar of the youth of the country for an Obi presidency has led to interest from beyond the country’s shores as can be said in the efforts of Naija We Can to mobilize support from abroad.

Every empire in history crumbled at a point. Is this the time for the empire of Nigeria’s thieving political class to crumble? The answer lies not too far ahead.