A senatorial aspirant on the platform of the All Progressives Grand Alliance, APGA, for Anambra Central, Mr Uzuegbunam Okagbue, has described his relationship with the immediate past governor of Anambra State, Chief Willie Obiano, as nothing to do with finances. 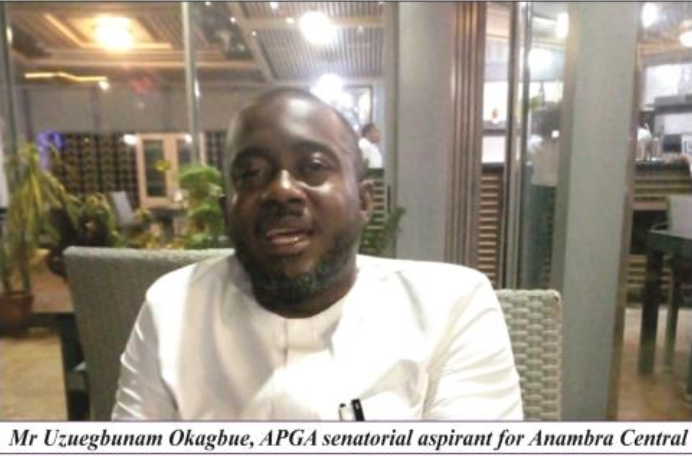 Okagbue who spoke with Fides in Awka, and who was perceived to have wielded enormous powers in that regime, said his powers never exceeded planning the former governor’s daily activities as his chief protocol officer and deputy chief of staff.

‘I was powerful, being that I was the first person he spoke to in the morning and at night before going to bed. Other than that, there’s no other power. Maybe that power people referred to was speaking to the governor of a state first thing in the morning and last before he went to bed. He spoke to me all through the night, telling me what to tell commissioners who probably must have gone to bed.

‘My power didn’t exceed planning his activities and his reliance on my capacity. Those were the powers I exercised. My relationship with him was never transactional because I never managed any contract. I never did any contract. But the governor depended so much on my capacity; so he would in every conversation refer you to Uzu. So talking about his closest staff, yes he spoke to me all the time. I was the first person he spoke to, to know how ready we were for the day. If that was being powerful, I was that powerful,’ he said.

On whether he did not find his aspiration tough based on the calibre of people he would be coming up against, the former banker said there was nothing formidable about human personalities.

‘We are all humans, regardless of age, and I have spoken about this severally. If Senator Umeh could lead the likes of Dr. Tim Menakaya who was already a former minister at the time APGA was formed, I don’t think there’s anything formidable in my aspiration because I have done eight years without a dent and I have done nine years in the private sector, delivering on set targets; the same reason Chief Willie Obiano found me. I think I have all it takes to represent our people at the senate,’ he said, noting that after being a chief protocol officer for four years the then governor added the portfolio of deputy chief of staff as testament to his competence.