My Ordeal in the Hands of Kidnappers Fr Okoye

For Rev Fr Cornelius Okoye, parish priest of St Theresa’s Catholic Church, Agulu, Anaocha LGA of Anambra State, the night of Thursday, October 14 this year, is one he will not wish to relive. It was the night he was kidnapped by those suspected to be Fulani bandits somewhere in Oji River on his way from Ugwuoba.

Fr Okoye was on his way back from a crusade at St Michael’s Parish, Ugwuoba, in the company of a hired singer when he ran into his abductors shortly after passing an Army checkpoint at Ugwuoba, Oji River LGA of Enugu State around 8pm.

According to him, his vehicle was stopped unexpectedly along the  said point as gunshots rent the air all around him.

‘They shot directly at us; we had to take safety by bending our heads to avoid the bullets hitting us and I could feel the heat from the shots,’ he said.

At this point the panic-stricken priest ran out to seek refuge at a swampy area close by. 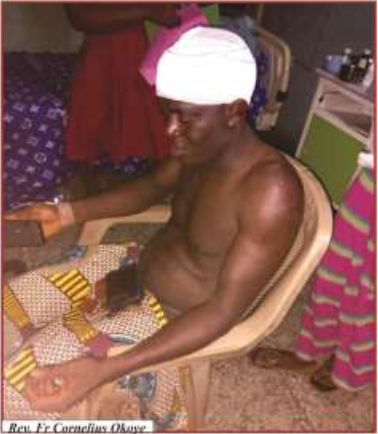 ‘I had to run into the swampy area near me, because it was dry season and it was just muddy. The mud swallowed me up to my waist. I could not move again. It was then five of them came to pick me while the other two picked my singer,’ he stated, noting that by the language they spoke, he suspected them to be Fulanis.

Fr Okoye who was later dragged to the bush along the express way, said it was at that point he discovered it was an attack on his life and not an attempt to kidnap him. According to him, they began to torture him with some tools they had with them.

The torment was so unbearable for him that he beseeched them to spare his life.

‘When I noticed that these people did not care for my life, I offered them money and told them I had some money in the car to take. Their response was to stab me with their knives and insult me,’ Fr Okoye recalled.

At this point, the priest said he lost all hope of coming out alive and believed that his earthly sojourn had come to an end.

‘They covered my mouth, nose, and eyes. I found it difficult to breathe, even when I had no idea of where I was at the time,’ he continued.

On seeing the hopelessness of eliciting sympathy from them, Fr Okoye had to resort to ejaculatory prayer.

‘I was saying the intercessory prayer of the Precious Blood of Jesus spontaneously inside me. Then came a clap of thunder with lightning. They thought it was the sound of a gunshot,’ he said.

Somehow, the priest continued, he gained strength thereafter and took off as fast as he could, despite feeling very dazed and hardly knowing where he was.

He kept running till he got help from someone who took him back to the express road before the local vigilante helped to take him to the hospital where he later regained consciousness and discovered he was in a hospital.

Reacting to this, the Catholic Bishop of Awka Diocese, His Lordship, Most Rev. Paulinus Ezeokafor, expressed his appreciation to God for sparing the life of the priest.

‘I have to thank God that at the end of the day, Father is still living and breathing, because if you listened to his ordeal, you would understand that it was really the handwork of God. God had everything arranged that eventually he was able to escape,’ the Bishop said.

‘It all happened as a miracle and if not for the mercies of God, Awka Diocese would have lost another priest,’ he said, while blaming the government for the security issue in the country. He charged government to beef up security to protect the people, while urging people to be security conscious and watchful of their environment.