My Mother, an Inspiration to my Priestly Vocation – Fr Vitus

By Mercy Hill and Daruwana Daku

For Rev. Fr Vitus Ezeiruaku, his priestly silver jubilee would not have been possible if not for the sacrificial love and virtues inculcated in him by his mother, Mrs Francisca Ezeiruaku. This, he disclosed on Thursday, January 6, during the occasion of the family tripartite celebration in respect to his priestly silver jubilee, his mother’s 78th birthday, and the wedding silver jubilee anniversary of his elder brother and his wife, Mr JohnMark and Mrs Sabinna Ezeiruaku. The event was held at Ezinifite, Aguata Local Government Area of Anambra State. 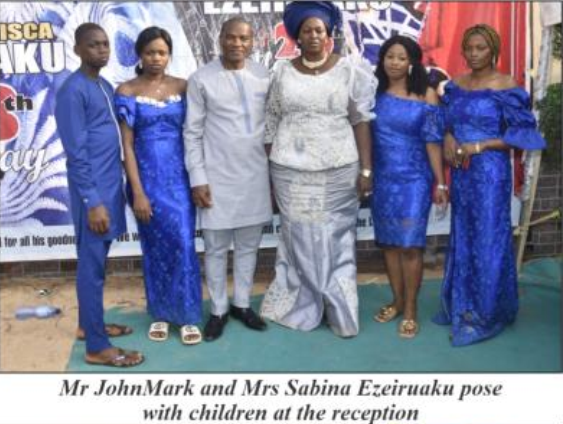 Fr Ezeiruaku who admitted God’s blessings to the family, also  appreciated to his mother whom he described as an angel to the family. He added that the mother’s prayerful life made him get involved in the Block Rosary and devotion to Mother Mary, which eventually laid the foundation to his priestly journey.

The priest who has served in parishes, hospitals and schools in the last 25 years as a priest, also thanked God for making him serve in his vineyard. According to him, though the challenges were enormous. God’s grace and mercies had led him to faithfully stay in the vocation over the years.

The triadic celebration which began with a thanksgiving Mass at his home parish, St. Pius X Catholic Parish, Ezinifite, was presided over by the Bishop of the Catholic Diocese of Ekwulobia (CADEK), His Lordship, Most Rev Peter Ebere Okpaleke. The thanksgiving Mass also saw priests of both Awka and Ekwulobia Dioceses, religious and dignitaries who came to share in the joy of the family.

Fides Media Director, Rev. Fr Martin Anusi, who was the homilist, shared lessons from the liturgy of the word just as, taking his cues from the readings of the Mass, he related his homily to the persons of Fr Ezieruaku, his mother, Francisca and the brother and his wife that celebrated their wedding silver jubilee. 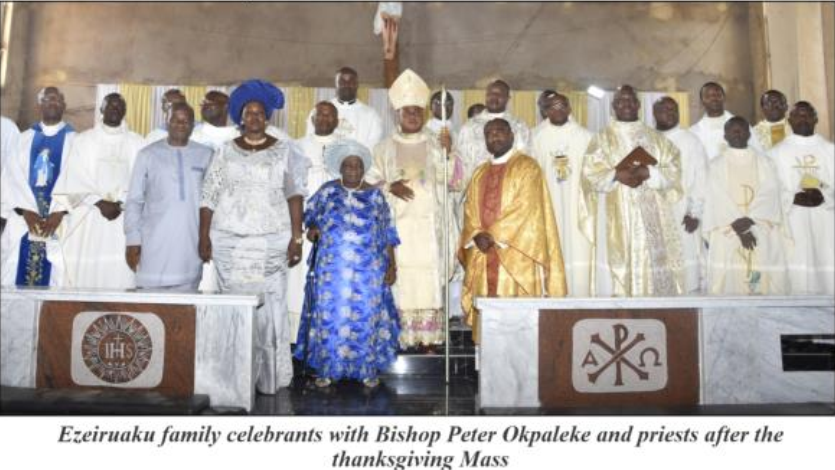 The homilist who thanked God for the triple celebration of life and anniversaries, thanked God for the life of the Ezeiruakus, noting that it was their sacrifices in the life style and prayer life of their mother which formed the major reason the family was in celebration. He also noted that the family was reaping the fruits of the word of God, as echoed in the first reading, that he who glorifies the mother always prepares treasure for himself.

Speaking of the Jubiliarian, Fr Ezeiruaku, the homilist stated that he was a man he had known right from the seminary days as a person with a large heart. He recalled the spirit of generosity of Fr Ezeiruaku and his contributions in the coming and establishment of Nigerian priests in the United States where he is currently working. 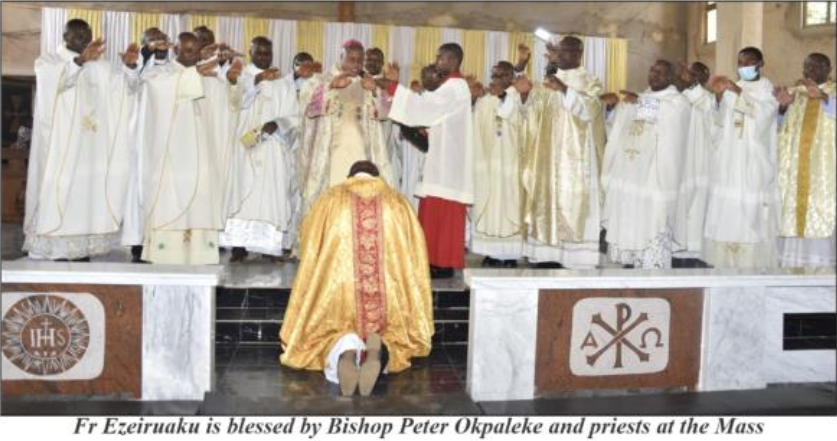 ‘He is a priest with a lot of goodwill, generosity and spiritual depth,’ the homilist recalled.

He also thanked God for the life of JohnMark and his wife for holding through in the last 25 years just as he charged them to keep it up in enriching their marital life by building on the spiritual wealth of their mother, Francisa.

The homilist ended by charging the congregation to make do of social capital development as a new genre of success and wealth creation.

For his part, Fr Ezeiruaku in his vote of thanks, appreciated His Lordship, Most Rev. Peter Ebere Okpaleke, priests and religious, the homilist, whom he described as his mentor, and moderator in the seminary, as well as his friends who came from far and wide to celebrate with the family.

Mr and Mrs Ezeriuaku in an exclusive interview with Fides, noted that their 25 years of wedding were a consequence of their love and endurance. They also thanked God for the life of their mother, just as they hoped that their marriage would have the opportunity to see many more years.