My Igbo Man of the Year and other Matters

The above title could have been any other one. For instance, it could easily have been ”Man of the year”, ”Nigerian of the Year”, among others. But I decided after much thought to use the above title, ”My Igbo Man of the Year”. It may seem as though I have succeeded in narrowing it down to an Igbo affair but given the circumstances behind the emergence of Peter Obi as a very strong Third Force that has outshone, overwhelmed and swallowed up the oppressive and corrupt status quo; given the fact of Obi, being the last man standing among the Igbo presidential aspirants; and Obi being able to keep the Igbo hopes of producing a president alive, it was a no-brainer that the title I chose will be the best one.

As I wrote some time ago, it would have been a great shame to Ndi Igbo, if nobody from the Igbo Nation had stood up to challenge those who wanted to take what belongs to us. The situation in Nigeria today is akin to three brothers eating from one plate that contains three pieces of meat. It is only normal that each will take one piece of meat and there will be no problem. But a situation where two out of the three brothers refuse to have one of the brothers take his share will show an obvious cheating.

With the exception of the period when someone from outside of those two regions occupied the number one seat, in the person of Goodluck Jonathan (rather accidentally), no one from outside the northern and western parts of the country has smelt the seat.

Although, ideally, this is not how it should be, circumstances in Nigeria have made it so. This is because we are in a country that is sharply divided along ethnic and religious lines and everything is consciously done to respect that. But while it may be largely so in other spheres of our national life, when it comes to politics, there seems a deliberate attempt to stifle the Igbo Nation and prevent it from even sniffing at the seat.

And so, it would have been this time around after the primary elections of the two major parties – the ruling All Progressives Congress, APC; and the main opposition Peoples Democratic Party, PDP. In both primaries, all the Igbo aspirants were edged out at a time it was, and is, clearly the turn of the Igbo Nation to produce the president.

To worsen matters, some of the Igbo delegates voted against their own brothers because they wanted to remain in the good books of their task masters. It was looking as if we had been brushed aside once again when a certain Peter Obi who read the writing on the wall in his former party, PDP, jumped ship and joined the Labour Party. That singular move is what has given the Igbo Nation something to be proud of. 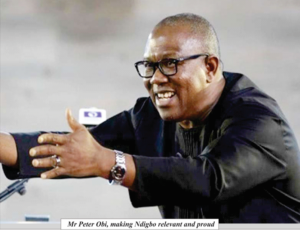 Those who had laughed at Obi after he quit the PDP are no longer laughing, hardest hit is the PDP which has now realized that it would have easily won the presidential election if it had Obi as its presidential candidate. But because of the greedy and power drunken nature of one man, the party lost its biggest chance to bounce back to power. Yet, Atiku Abubakar who ”bought” the party’s ticket claims he is a unifier.

I ask, what is he unifying? A true unifier would have worked to allow the zone which has not produced the president to take the ticket of the party and then rally others to support him. But that did not happen. Now the PDP can only regretfully watch Obi soaring higher and higher to prominence and buoyed by the support of a vast majority of Nigerians.

It is clear that if the election were to be held this moment Obi will win. All the polls released have also had him leading rather comfortably. Obi has since become a Nigerian project, the vehicle through which the long oppressed masses are seeking to use in reclaiming their country. This is to say that even Obi is no more in control of himself. He cannot even back out now.

Without him, the Igbo Nation would have been one huge laughing stock among other zones of the country. Without him, perhaps the Igbo would never be taken seriously again in the future. But because of the way he has been fighting against this injustice and conspiracy against Ndigbo, the rest of Nigeria may not be in a hurry to take what belongs to Ndigbo in the future.

I’m pretty sure that if anyone had done like Obi in the past PDP would have given Obi the ticket. But because our politicians are always protecting their stomachs they lost previous opportunities to stamp their feet. It was because they had been seen as docile that the South South was given our slot then in 2015 in the person of Jonathan. To the power brokers then, any zone could do so long as it was not the Southeast Zone.

So, when another opportunity arose, the best one at that, they still had the temerity to deny the Igbo Nation the presidency by refusing to give their aspirants the tickets of their parties. But today, they are seeing what they never bargained for. They are seeing a candidate from the Igbo Nation gaining unprecedented acceptance across the nation and thriving in areas hitherto thought no-go areas. But what they have failed to realize is that Nigerians have had enough, the suffering Nigerians, that is.

Nigerians are beginning to understand that problems do not distinguish between a northerner and a westerner; a Moslem and a Christian. As Obi would say, no one goes to the market and is given free items because of where they come from or which religion they profess.

The excruciating hardship in the country has united the long suffering masses of Nigeria who want a change. And from their mood, one senses that it is only the opportunity of making that change through their votes that is keeping them from striking out.

This is why I fear for what will happen to Nigeria if some people tamper with votes by declaring the wrong person as the winner. I feel the EndSARS protest would be a child’s play to what will happen. Nigerians are hungry, angry and frustrated to the point of madness. The thought of having a brand new person in Obi as the face of a New Nigeria is what is keeping tempers barely at bay. It is the hope that is keeping millions of angry Nigerians from pouring into the streets and venting their anger at perceived oppressors.

In case those oppressors think they are not known, they will be making their greatest mistake. Nigeria is sitting on the proverbial keg of gun powder. It will only take the slightest of touches for things to go boom boom and woe betide anyone to be seen as playing a part in subjugating the will of the people.

But as we slowly advance to the February 25 Presidential Election, I think Ndigbo should acknowledge the role of Obi in not making them a forgotten people and a laughing stock among other peoples of Nigeria. It is not about political party or religion. It is about preserving the pride of a people who are naturally proud any way.

When the All Progressives Grand Alliance, APGA threw up a certain General Gbor during the last presidential election to be its standard bearer, it was seen as something of a joke, given that it was very obvious he was never going anywhere, being an unknown quanity.

But even at that, his presence was at least felt in parts of Awka, the capital city of Anambra State where APGA is headquartered. I remember that his billboard could be seen at Kwata Junction and some noises were made as APGA campaigned for him, even though Gbor was from Benue State.

But this  around, APGA has a son of the soil, Justice Peter Umeadi, as its presidential candidate. But here the absurdity begins. Whereas Umeadi is more accomplished than Gbor, he has failed to make more impact even in his home state than Gbor did; notwithstanding that Umeadi was among the first of the presidential candidates to come out with posters. His party is also not campaigning for him. There is not a single billboard of him I’ve seen anywhere in his own state and he appears to not be in the conversation even among his party members.

Today, I can’t honestly say whether he is still contesting or not, at a time when preparations by candidates are at their frenziest. Has anything gone wrong? We may never know. But I know one thing: this is how not to contest an election.