Speaking to The Guardian, yesterday, Owolabi lamented that the right people are no longer allowed to manage sport in the country.

“Up till now, I still wonder why we cannot get things right in the country, especially when we have the talents and knowledgeable personnel, who can run our football well. We have not even given ex-internationals opportunity to contribute their quota, yet footballers are the reason people queue to become football administrators.

“There are some people in the society who are making life difficult for us in the country simply because they have the backing of godfathers: the politicians. These people have enough dollars to throw around and make those saddled with electing candidates sell their conscience.

“I can recall the process that led to my discovery at the grassroots. And eventually, I was opportune to play for the national team. Can one say the same thing of our league players? No! Now, what is happening is that the players at home are being neglected for foreign based? That is why, at times, I wonder what we do with 30 foreign-based players we invite for the Super Eagles without any input from our local league. This is a sad development as far I am concerned,” he said. 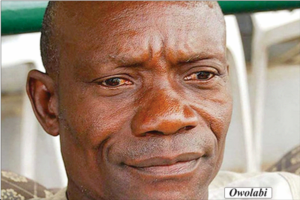 The former Eagles’ winger added, “So, how do you expect those players coming from outside to train under two to three days and expect them to play as a team and give you a good result? That is what we see in our today’s Eagles. It is not possible to assemble them in a short time and expect them to perform wonders.

“This is why the media should help this country by critically analysing the excesses of these politicians in football and Sports Administration. I think these politicians should stay away, concentrate on their politics and allow the best practice for the success of our football.

“What I have found out is that the media has pitched tent with some of them. Journalists even find it convenient to describe these politicians as sports administrators. Our football may soon go extinct if nothing is done to address this anomaly in our football,” he stated.