This week on Inspirational Personality page, we present to you- Chinecherem JudithMary Efobi, popularly known as Princess Neche Efobi, who recently emerged the winner of the Ada Igbo Zuruoke Cultural Pageant 2020/2021, which held on the 6th/7th January 2021 at Lively Hills Hotel, Okija, Anambra State.  Queen Chinecherem Efobi is a news reporter and anchor of the School Run Page in the Fides Newspaper; Media Personnel to the Directorate of Sports, Awka Diocese (DOSAD); a rising Nollywood actress; sports woman; and a student. Read on, as she takes us on this life touching and inspiring journey of her life experiences with Fides Reporters, Mercy Hill, Adjumoke Aminat Alebiosu, and Cynthia Igbokwe. 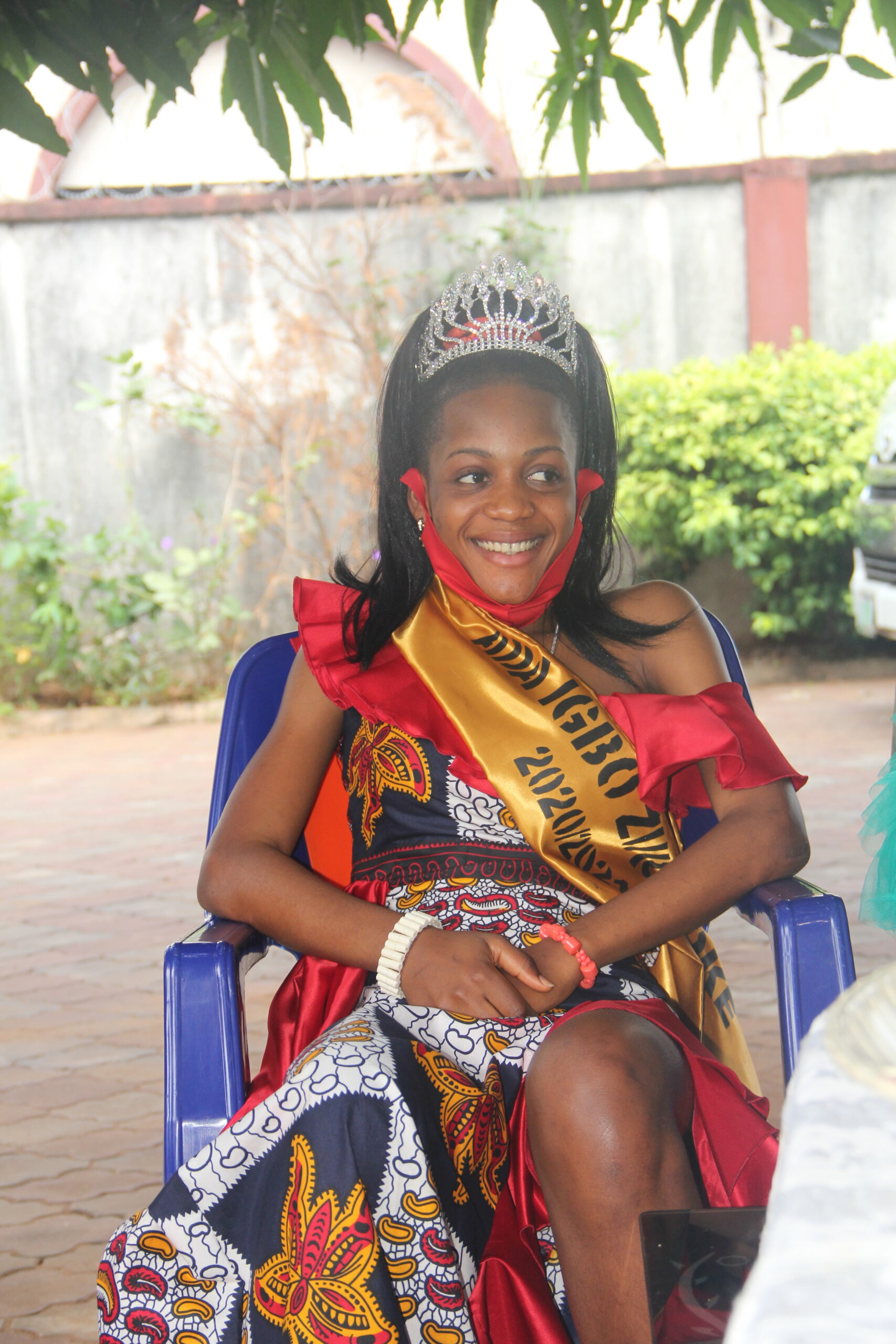 This is just a summary of who I am presently

I am soon going to be a student at the Anambra State University, (Chukwuemeka Odumegwu Ojukwu University, COOU) and I am working with Fides Media Limited, Awka, as a reporter and a columnist of the ‘School Run’ page. Alongside that, I am the Media personnel for the Directorate of Sports Awka Diocese (DOSAD), a Nollywood actress and a Nigerian Referee in training. I am very stubborn and focus minded. I always go for whatever I believe in.

My growing up was traumatic

I am the daughter of Late Mr. Justin Efobi from Neni, Anaocha Local Government Area of Anambra State.

My growing up was rather very traumatic and a confusing one for me. Because, I had lived my childhood never knowing who my real parents were till very much later. I grew up with my maternal grandparents, who made me believe that my mother was just my aunty and they, my parents, not knowing they were my grandparents. Even as my disguised parents, they never showed me that sense of belonging. Life was very tough for me while I was growing up, because, I felt a missing link and felt too that something was unusual in the way I grew up with my grandparents from the way other children like me related with their own parents

I give great credit to them however, for feeding me, housing me, taking care of my school necessities as a kid. But not understanding many things were tough on my young mind. I had no one to unburden to then.

I had to lot of corporcal whenever I got involved in any trouble from my family. I believed they were doing that to keep me from getting “spoilt” or making the so called “mistake” that probably they thought got me the world. It was simply traumatic till facts began to fall into place very much later.

After my primary school education in 2014 /2015, I was taken to Lagos to live with one of my uncles. It was a bit of relief for me, but unfortunately, things did not work out as planned, I had to return to Anambra. I never knew God was planning something big for me.

How I met a Dad I never had…

In December 2015, we came back to Anambra from Lagos for Christmas, I did not know that my uncle had already planned that I was not going back with him, it was painful and heartbreaking. But I took courage and continued with the only thing that was like home to me -going to the church that was behind my grandparent’s house. In the church I found peace, I served at the Altar; I taught kids like me catechism, swept the church, etc.

So, after I was brought back, I met Rev Fr Coach Obinna Dike, he was then the priest-in-charge at St. Joseph’s Catholic Church Neni. Fr. Dike, who had observed me keenly saw how devoted I was in the church and he took interest in me. It was because of his closeness and kindness towards me, that I began to tell him of my background and the much confusion in my head. He then met my family.

He had seen me sleep in the chapel most times, especially those days when I sensed trouble in the house. Even until now, when I have a flashback of my childhood, I still wonder how I was not a victim of any of these rampant bad experiences like rape, among others. I thank God for sparing my life. I was lucky that my grandparent’s house was directly behind the church, so I was able to access the church anytime I wanted to.

Fr Dike adopted me as his own daughter and I accepted him as my father especially as my grandfather I lived with died. And up till date, I still refer to him as a Dad I never had. He took care of me, from then onwards, he took up the responsibility to sponsor my education and he has not failed. Somehow I discovered who my mother was by myself.

When I was in SS2, I took ill and I almost died at St. Joseph’s Hospital, Adazi. My new Dad (Fr Dike), was at my bed side. I thought if I had died, I had a family in him, who loved and took care of me. Many people condemned me to being possessed with marine spirit and they were ready to take me to pastors and native doctors. My Dad (Fr Obinna Dike) stood his ground that it was a medical case and possibly a case of trauma, because any one, who knew me, would attest that I had passed through a lot of thorny grounds.

While I was at the hospital, they started taking me through many mind healing processes, one of which was revealing to me who my real parents were. They had to tell me who my biological father was. But  the story seemed to be extremely complicated. At least I now know who they are, and I have come to realize myself through the people God ordered my way.

I am done with my secondary school education. I am now seeking admission into the university, and hoping to get into the higher institution to study Mass Communication.

You talked about the days you spent at the hospital, what really was the ailment?

Hmmm…(she sighs) life with at childhood was difficult.  It  resulted to my developing ulcer at an early age. I think other sicknesses generated from there. I do not even know what it was called. I only noticed I always had pains in my stomach most times. I first thought it was normal stomach ache, but after meeting Fr Dike, he took me to the hospital for diagnosis. Then, I could not stay in noisy places, staying in a place with so much noise and shouts scared me. I believe this was a result of a bus accident I had.

I found myself on the hospital bed, some day in October 2018. Then, I was in SS2, a teacher was flogging another student in SS1, so much noise came from the whips on the student. I was not  myself again, I fainted after a while and then was rushed to the hospital. The doctors tried their best to revive me.

I was unconscious for three days and I was told later that I had been on oxygen for three days. I survived it at St. Joseph’s Hospital Adazi-Nnukwu. I had been to too many hospitals before then. I remember going for a brain test, to be sure my brain was intact.

I had too many aspirations as a child, One even led to my being a tomboy.

Back then, I wanted to be many things but mostly, a footballer. In my primary school days, I played ball with boys. Those days, my teachers believed that I liked boys, because I played with them; chased them around the school compound and much other stuff.  I even did all the risky games boys did; back flip and all. I desired to be a footballer; I still have passion for it though.

You had always desired to be a footballer, now, you are a beauty queen, what led to that?

While I was growing up, I realized I did not really have that much time to concentrate on playing football and doing all the things I had started developing for myself. Like I said before, I am a student, a reporter and columnist, an actress, etc. so I decided to be a referee. At least I still derive self-fulfillment from doing that, since I decided not to play football again.

Since your desire was football, how did you start writing and reporting?

I realized that part of me through Fr. Dike. He was the one that personally trained me from the very scratch. The Catholic Diocese of Awka, transferred him from my home parish to Fides Media Limited, Awka.  Since he had adopted me, I visited him more often in his new station where he oversees the News and Editorial Department. I caught interest in writing. When he realized that, he began to mentor me. He taught me how to write and source for news stories. From there, I started to anchor the “School Run” page in Fides Newspaper, even as a secondary school student. It was mind-blowing experience for me, although particularly challenging since I was a student.

For how long have you been writing for Fides Media?

I started writing late 2016 and began working with the then Fides Communications but now Fides Media Limited.

…THE STORY CONTINUES IN THE NEXT EDITION