My Fears for Obi

If ever there was going to be anyone fittest enough to be Nigeria’s president now, you don’t have to look far. That person is none other than Peter Obi, former Anambra State governor. He is one of the foremost personalities in the Southeast contesting to be president as the 2023 general elections in Nigeria draw near. Obi is one man who has managed to package himself well enough for many Nigerians to now see him as standing out from the pack. 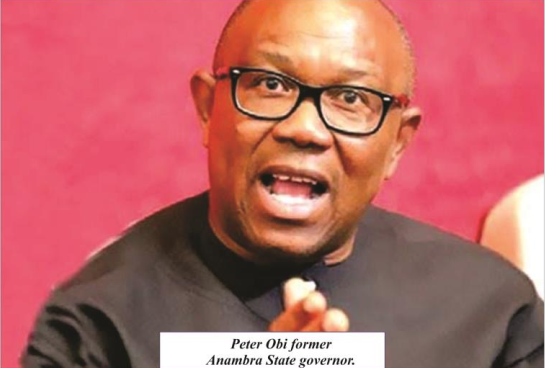 It is not for nothing that many groups have been set up on the social media, all supporting his aspiration, with one group aiming to raise billions for him to aid his campaign effort. Unlike other politicians who pay heavily to maintain such groups of supporters, Obi is paying nothing. All that’s happening now is all a product of the love and respect they have for the man, Peter Obi.

As governor of Anambra State, Obi covered himself in glory and became legendary for squeezing money from a rock and instituting a culture of savings. Little wonder that he enjoyed the full support of international donor agencies who halved the monies he spent on critical projects. On leaving office, he made history by leaving a whopping sum of N75 billion for his successor, Chief Willie Obiano.

Obi displayed a frugal attitude that made him a hero among conservationists and a villain among hedonists. In fact, if elections were to be held today on the social media, it is likely Obi would win hands down. Sadly, however, elections are not won that way in Nigeria.

There is no doubt that Obi is the most popular of all the contestants among the neutrals but the neutrals are not the ones that give power. Those who do that are the ruthless, sadistic cabals that control Aso Rock. They represent the greedy political class who have long held the nation by the jugular and sucking her dry. Obi is not their ideal kind of man and they will do everything to frustrate him.

Obi is not even helping himself by insisting that he would neither give money to delegates nor allow the business of governance to go on as usual. These are not what the normal politician will want to hear and this is why Obi will be their target. Already, the signs emanating from his party over the fate of delegates in Anambra are not encouraging as it appears the national body is trying to whittle down Obi’s support base. The PDP in Anambra are protesting, fearing that if the right thing is not done, the state aspirants will not be able to contest in the coming elections.

The above is one of the ways they stop those they don’t want, and there are many other ways. But maybe we will cross that bridge when we get there.

For the time being, I’m really afraid for Obi. The situation in the country, as well as the intrigues, make me afraid. For one, it is unlikely the power brokers in Nigeria will cede power to the Southeast. They just do not trust us enough to give us power. Thus in the event that they decide to bypass the east, they may offer the veepeeship to an Igbo man as a kind of appeasement. Indeed, there are feelers in some quarters that Obi will eventually be taken as running mate to Atiku Abubakar. The likelihood of this happening isn’t however causing any excitement in the east which maintains, and rightly so, that it is their turn to produce the president.

But the reality on the ground remains that our failure to put our acts together and speak as one in the past is coming back to haunt us now.

We have for long been too divisive among ourselves that the rest of the country has come not to take us seriously. I bet you that if it was the Yoruba Nation that was today insisting it is their turn to be president, they will get it. After all, who has forgotten the events after June 12 following the truncation of Abiola’s victory in 1993? Didn’t they eventually appease the Yorubas by first allowing Ernest Shonekan to be interim president before getting Obasanjo out of prison to become substantive president? Such would never have been done for the Igbos. In fact, if it was the Igbos that had that problem, it would have been fellow Igbos trying to truncate the chances of Igbos getting the presidency. That is how we have been playing and still play our politics.

Last time out, didn’t most of the Southeast governors oppose the choice of Peter Obi by Atiku as his running mate? Even now, the same scenario is playing out, with the governor of Abia State, Okezie Ikpeazu, said to have endorsed Nyesom Wike of Rivers State, while his Enugu counterpart did not show up when Obi visited the PDP delegates in Enugu. But we saw how a governor in one of the western states turned up when Obi came to see the delegates.

It is this kind of politics of divisiveness and envy that has made us a laughing stock among other Nigerians. That is why this time that we say it is our turn they are not taking us seriously and are instead fielding their own candidates.

I make bold to say that an Igbo man can only become president if ”they” allow him. The forces against the Igbo man becoming president in this God forsaken country are just many and we have to blame ourselves for that. We have thrown ourselves outside the power corridors by our actions and now we can only expect to peep from outside.

Now, another thing is that should Obi accept to be running mate to anyone from the north, especially Atiku, despite that being the quickest way an Igbo man will get to Aso Rock, his people will berate him for selling the presidency to the north. In fact, I will not blame anyone doing that as we can’t be seen to chicken out when we should be insisting on taking our chance.

Obi’s camp has already refuted such suggestions as per their principal actually gunning to be Atiku’s vice. It is the right thing to do by rejecting such, no matter how tempting. Indeed, if ever Obi should settle for vice, that will kill his political career as he will be seen as the Judas of Igbo politics. Same will apply to any other Igbo aspirant. So where do we go?

Worse still, the reality of Nigeria today is that the north which holds the yam and the knife doesn’t seem ready to relinquish power. They have also sewn up everything tightly to the extent that they control or dominate the armed forces. Thus, should anyone they don’t want succeed in getting in, they can easily remove the person any time they want. Such a person can only be tolerated if the person decides to be a bootlicker and an errand boy and that is not the kind of Igbo president we are talking about or wish to have.

I also do not see Obi allowing himself to be controlled like the Uzodimmas and Okorochas. He is a mite too decent for that and will also kill his political career if that were to happen.

It is a sad commentary that we allowed this to happen. When I say ”we” I mean the rest of the country; the other geographic zones. But then the north has always been clever. While appearing stupid, they quietly plan how to increase their strangle hold on power and on the rest of the country. As people would often say, while we blow grammar, they quietly go about their business and laugh at our obvious stupidity.

I have used Obi to represent the Igbo aspiration for the presidency because he is our best and the most likely to win in an ideal situation. Obi represents decency and quality and such people are not such that would want to be sullied by the negative and dirty politics on display in the country.

In the long run, I will revert to what I’ve always preached: let Ndigbo go home and develop their place. Let our leaders pool resources and develop the Southeast to such an extent that we will be self-subsistence and be the envy of other zones in the country. We can do it. That will be our new Biafra which we can achieve without shooting or killing one another. The average Igbo man does not care who leads Nigeria. All he wants is an enabling environment to operate. Of what use will it be for us to have a powerless president?

It is time for Ndigbo to go home.