My Blueprint for Anambra Football – Iloenyosi

The new chairman of Anambra State Football Association, Mr Chikelue Iloenyosi, a.k.a General, recently had a session with Fides Editor-in-Chief,  Jude Atupulazi) and unfolded his plans for football development in the state.

Congrats on your emergence as the Chairman, Anambra State Football Association. Briefly, can you tell us how you came to this moment?

Thank you very much. My name is Chikelue Iloenyosi. We have been here for more than two years and some months about the process of the Anambra State FA, but unfortunately, it happened this way because I am the sole candidate in the election and unopposed. And we have the statutes, we have the guidelines of the Nigeria Football Federation and Anambra State Football Association and the guidelines say “The simple majority of votes cast are valid”. I got it.

The second one is, I am an unopposed candidate; I did not contest election with anybody. The statute says, “Come and take a bow”. They did not do that. But everything that happens in life happens for a reason, for the purpose of God. I kept on pushing and finally, I wrote a petition to the presidency. They sent to NFF, NFF sent to the Appeals Committee of Anambra State. 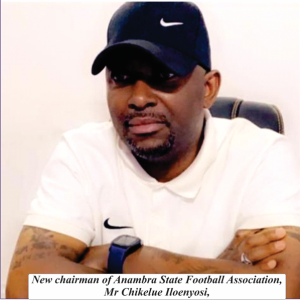 The Appeals Committee of Anambra State said we had two options on this matter: the two options are to do another election and that election they will do, only this man cleared by the Electoral Committee and Appeals Committee is the one that will still contest the election. So, no need of doing that. It’s to give him the chairman because he is an unopposed candidate.

If you conduct another election, he is the only one that will still contest. So, that was what brought in to the saga of everything. And finally, they sent back to NFF; NFF Secretary-General sent to the Head of Legal. Head of Legal said there was no need of arguing anything because he was unopposed; he was the chairman. And that was how I came in as the chairman of Anambra State Football Association by the grace of God.

You made some appointments and one particular one that appeared to confuse some people was the appointment of a secretary. Can you give us details of why that was done and why some people were confused?

Honestly speaking, that appointment as the secretary of the FA was very delicate and very strategic and I took the step and I am bold because I want to succeed. He is my friend; I don’t have anything against him, but he was the one who wrote a letter to the Nigeria Football Federation that his tenure had ended. I am not the one that wrote the letter.

Before I took over the office, the NFF showed me the letter. Meanwhile, they did not remove him because they did not want to have a vacuum in Anambra State, because there was not a chairman and removing the secretary would be out of order. So what they did was for me to come back. The statutes say you have the right to appoint your acting secretary.

So I looked into everything and said okay, I cannot fool myself because I want to succeed; I am not an iron man. And the guy has stayed there more than twelve years; I need a fresh hand. That’s why I did the appointment because I want to succeed. It’s not like he did anything to me. No! I want a secretary that will be loyal to me, and the secretariat has to be under people of integrity. That’s what I did.

Most elections are trailed by frayed nerves, with some toes being stepped on and all that. So, how far have you gone to ensure that everybody is carried along and that there are no hard feelings?

You can see what I am doing. I went to visit the former Secretary-General, Victor Nwangwu; I went to his house. I have been consulting people and everything because I want to succeed. I don’t have any aggrieved mind, and I went to see those people who were aggrieved to say, “See, the politics is over.

This is about development. This is about the grassroots of Anambra football and I want to work”. I am a very serious minded person, driven by passion; that’s why I took all those steps because I want to succeed.

So, what are the new templates you are bringing to the table for the development of Anambra football?

I heard about your plan to develop beach soccer in Anambra State. Is that true?

Yes, I always talk to the president of beach soccer. I will meet him at the AGM. We have an AGM in Lagos; I will meet him there, so I will discuss with him because it is very important that we set everything rolling so that we will have a good beach team that will represent Anambra State. We have two or three players that will represent Nigeria. My programme now in Anambra as an ex-international is to make sure we are playing football, playing tournaments.

We must have players from under-17, under-20 and under-23. I told the clubs the other day at a meeting, if you have players, you don’t sell players, your players don’t go to national team, you don’t make money. My aspect of being here is for you to do your business in football capacity to make sure you get it right because no matter how you scramble for money, if you don’t get money to put back to the system in your club and help other people, you will be demoralized.

For me to be here is to make sure that we will have people that will be in the affairs of Nigeria’s national teams – under-17, under-20, under-23; so that they can relieve you. If you sign a player and they pay compensation, it comes to you; it does not come to me, but that progress for me will be there to make sure that we have people in the national teams from Anambra State.

You are an ex-player before you came, some of the ex-footballers in the state had been complaining about being sidelined, not being part of the system. How are you going to integrate them into the system?

Yes, I will integrate them into the system. I already made a plan. That’s why I am making a plan with Bonfrere Joe to make sure that they come to Nigeria; to Anambra State, to do approval because 85% of coaches in Anambra State do not have coaching certificates.

You must have the basic, have the certificate, because the children you are trying to coach, the grassroots, will be people who do not know anything about football. So, you must inculcate in them that they have to from here, go to the next level. I will carry them along because I am a player of the grassroots and an ex-player. It’s my priority.

Anambra State used to have three teams in the elite division. Now we have none. So is it part of your plan to ensure that Anambra has an elite football team?

That was the first thing I discussed with the deputy governor when I met him and they promised that they were going to do that and everything. I have already started making plans for where we can start because we can’t have a beautiful stadium and other people are coming to play on our own soil. We must have a good team; we must have developmental football, a team that will come to be training and playing matches and we are selecting them and everything because what the government is doing is about grassroots and football is a thing that unifies everybody.

So, I am here to support the government to make sure we get it right. That was the first thing I told the deputy governor. So by the special grace of God, we will get it right for the developmental football, for the club side, for everything, one after the other.

Many people have praised the stadium for its beauty. They are even calling for some of the national teams coming to play there. Can you facilitate that?

Part of the advantage you have as an ex-player is that you were deeply involved in football in the country; you have a lot of influence. So how far will that influence come to play to ensure that you succeed as an FA chairman here?

Influence is going to show because, you see, I have been doing things in the secret without people knowing. Now, match commissioner, now referees, coaches and everything, all those things; there is none that they will do again that an Anambra person will not be inside.

In September, we are doing election and I am coming in as a board member representing the Southeast. So once I am on the board of Nigeria Football Federation, everything that belongs to Anambra State must come to Anambra. That one is very sure!

What will be your relationship with the Sports Writers Association of Nigeria, Anambra State Chapter?

I have discussed with the chairman that when I come back from the AGM, we will see; we will have a meeting, we will discuss. They are the stronghold of journalists in Anambra State and I believe in the next four months, regardless of whatever happened in the past, I will throw everything in the past.

The chairman of SWAN has already written me a congratulatory message. So they are part of me; I don’t have any problem. I want to work with them because we want to achieve football in Anambra State.

Finally, what’s your message to the Anambra sports community?

What I am telling them is to never give up in anything you are doing, or give up on God. Just remember that all powers belong to God.