My 2nd Term Ambition is About Consolidation – Chiekwu

…Says He Has Support of Idemili North Stakeholders

The member representing Idemili North State Constituency in the Anambra State House of Assembly, Hon Chief Ifeanyi Arthur Richard Chiekwu, says he’s seeking reelection to enable him to consolidate on the already made gains as the people’s representative.

Hon Chiekwu who stated this in his country home, Umuoji, while addressing stakeholders drawn from the 12 wards, thanked Umu Idemili for all their support and encouragement, noting that going back to the House would afford the Constituency the opportunity of producing a ranking member.

The soft-spoken legislator stated that his second term ambition was for the collective interest of the Idemili North constituents, even as he called for continued support and prayers; assuring that his second missionary journey to the House would yield more fruits.

‘I am here today to declare my interest. I want to return to the House to continue from where I stopped. I’m also here to intimate the stakeholders on what informed my decision to seek re-election. It is for our own good. Idemili North Constituency will automatically have a ranking member. It means a lot,’ Chiekwu said. 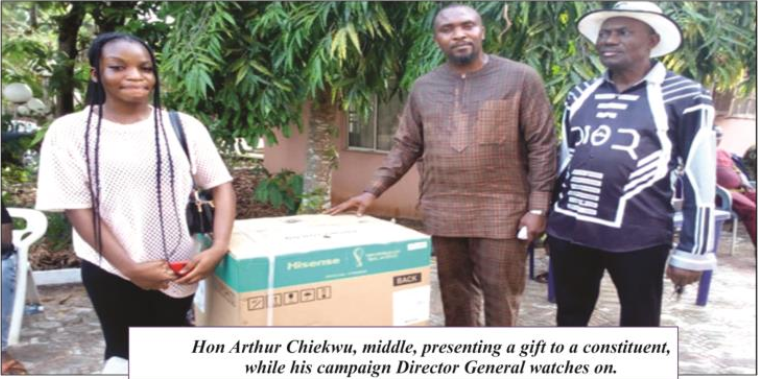 The lawmaker known for his humanness and philanthropy, enjoined Umu Idemili North to support the All Progressives Grand Alliance, APGA-led Anambra State Government, acknowledging that Governor Chukwuma Soludo had started well and deserved the unflinching support of all and sundry to enable him to deliver on his campaign promises.

Hon Chiekwu, popularly called Money Man, by his numerous supporters and admirers, said that he would not renege on his campaign promises of quality representation, as well as making of life-enhancing laws that would impact directly on the lives of Umu Idemili North.

‘We are more interested in the welfare of every Onye Idemili North. We’ll continue to reach out to those seeking for one assistance or the other. I am coming out again to improve on what we have been able to achieve so far.

I have the blessings of Rev. Fr. Ejike Mbaka, Rev Fr. Ebube Muonso and many religious leaders. Chiekwu 2023 Project is a Divine one,’ he concluded.