The Anambra State Chapter of Modern Traditional Medicine Practitioners of Nigeria, MTMPN, has inaugurated executive members that will oversee the activities of the body across the 21 local government areas of Anambra State.

The inauguration which was held at Amawbia, Awka South LGA, Anambra State, witnessed the attendance of members of the association from across the state.

In his inaugural speech, the State Chairman of the association, Chief Christian Nweke Anakwe, disclosed that the emergence of MTMPN as the apex body of traditional medicine practitioners followed its recognition by the Federal Government of Nigeria. He noted that the inauguration of executive members across the 21 LGAs of the state was a result of the directive issued from the national body in Abuja. 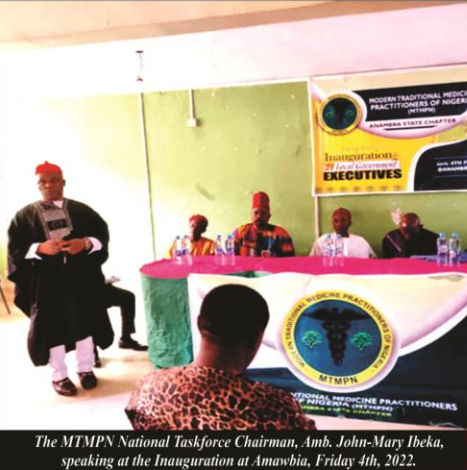 He appealed to the State and Federal Governments to support the association in the area of research and development to enable them to compete favourably with their counterparts in other nations of the world. He revealed that countries like India and China had modernized their traditional medicine, saying that traditional medicine improved the GDP of those countries and the standard of living of their citizens.

For his part, the Southeast Vice-President, Chief Hyacinth Ezeugo, while congratulating the newly inaugurated executive members, expressed readiness to work with them for the promotion and advancement of traditional medicine, noting that the Federal Government had shown willingness to collaborate with traditional medicine practitioners in the country to promote the country’s health sector for the wellbeing and longevity of citizens.

He led the entire Southeast Zone of MTMPN in paying glowing tributes to the late Rev. Fr Dr Raymond Arazu, erstwhile Chairman, Traditional Medicine Board, in Anambra State, who passed on recently and whose funeral took place recently in Ihembosi, Ekwusigo LGA.

Contributing, the MTMPN National Taskforce Chairman, Amb. John-Mary Ibeka, who served as observer at the inauguration, alongside security personnel and members of the press, explained that the association was the only umbrella body recognized by the Federal Government through the Federal Ministry of Health after dissolving the previous association, which, he said, was riddled with crises.

According to him, in collaboration with Federal Ministries of Environment, Agriculture, Science and Technology, Education and Health, the body had supported the development of traditional medicine, assisted regulatory agencies in different areas in curbing the emergence of fake practitioners, as well as enhanced capacity-building in traditional, complementary and alternative medicine practice across the federation.

He described traditional medicine as the first drug which nature gave humanity for the treatment and management of ailments, noting that it was the secret of longevity of the forefathers.

Adding his voice, the newly inaugurated MTMPN Chairman of Orumba North, Mr. Gerald Okpala, maintained that there existed great advantages in studying the situational analysis of traditional medicine in Nigeria, adding that the publication of the Nigerian Traditional Medicine Pharmacopoeia would help to build a better health environment in the country.

His Awka South counterpart, Mr. Vincent Mbanugo Okonkwo, stressed the importance of sensitization in promoting the activities of the association and promised to use his new position to implement the policies of the body down to the grassroots. He said that town hall meetings and visits to traditional rulers in the LGA would be carried out in order to get them acquainted with the workings and activities of the body for the longevity of the masses.

He said there was need for people to embrace traditional medicine as it was given to humanity by nature.  In their respective remarks, the Chairman Police Campaign against Cultism and other Vices, Prince Donatus Orjika, and the Anambra State Secretary of MTMPN, Mr. Patrick Ifeonu, lauded the association for what they described as the courageous step taken to  inaugurate the new executive members and tasked them to work assiduously for the accomplishment of the association’s goals and aspirations.

Highlights of the occasion were the presidential opening address from the National President of MTMPN, Alhaji Dr Ibrahim Nakowa Dada; through his personal assistant, Adamu Shaba Abubakar, and the oath of office and allegiance taken by the new state and LGA executives.