Amawbia Community in Awka South Local Government Area, of Anambra State has elected Mrs. Chinyere Anagor as the new women’s leader in a highly contested election. She beat two other contestants to emerge as the winner, polling a total of 293 votes, while Mrs. Rita Odumodu and Mrs. NkiruAghanya gathered 140 and 72 votes respectively. 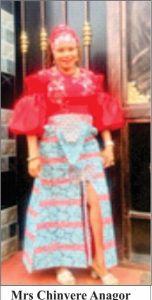 In a chat with Fides, a visibly elated new women’s leader-elect, Mrs. Anagor, said she was moved

by the fact that women’s leadership in Amawbia, was abysmally low in recent times.

She said she joined the race to re-invigorate and add more vigour to the leadership status of Amawbia women in line with what it used to be during her childhood days.

‘As a person born and bred in Amawbia, women’s leadership at present is below expectation and I wanted to resuscitate it,’ she said, while planning to mobilize Amawbia women to go into active participation in socio-cultural and political affairs reminiscent of past women activists.

She also promised to fight against domestic violence, as well as make genuine efforts to attract empowerment and job opportunities to women and youths in order to stem the tide of criminality.

Noting how her opponents used securing employment and

admissions to students to campaign against her, she said she would redouble efforts towards assisting women and youths to secure employment and admissions into higher institutions of higher learning.

Mrs. Anagor also disclosed plans to meet with elders in order to chart a course of action for peace and progress in Amawbia; even as she offered an olive branch to her opponents during the election to work with her team for the advancement of women and achievement of her goals.

Speaking on the election, the President General of Amawbia Town Union, Engr. GoddyAronu said the election would enable the union to work with women for the overall benefit of the women folk and the community. He advised the new leadership to cooperate with the state government to achieve a livable society.

The election which was

supervised by the Women’s Affairs Department of the Ministry of Women’s, Children and Social Welfare, was held at the Eziokpaligwe Square, Amawbia on Saturday 16 July 2022.

Earlier in her speech before the election, a Director in the Women’s Affairs Department, Mrs. Ekesiobi, described the services of the women’s leadership as selfless with no salary attachment. She therefore warned aspirants not to expect any salary but to work for the interest of the community and society.

solicited for cooperation among the losers instead of sowing seeds of discord in the community.

The election was described by keen observers as free and fair.