Despite being hit with several injuries in the past two years, which has seen his form drop, Wilfred Ndidi is still regarded as one of the best ball winners in the English Premier League and beyond.

By all standards, that is one of the highest compliments a Nigerian plying his trade abroad can receive.

The Super Eagles midfielder joined Leicester City from Genk in 2016/17, following the sale of Frenchman Ngolo Kante, who at that time was the Foxes’ best defensive midfielder, to Chelsea.

Ndidi, who was only 19 years of age as at the time, ticked the boxes and put up impressive performances in his debut season at the King Power Stadium and has since grown to become a mainstay in the Foxes first team.

He may come way short in his passing ability, but the 25-year-old is great at what he does and that is why his ball-winning prowess, his incredible stamina – which saw him feature 38 out of 38 times in the league in his first full season – and his impressive tackling skills cannot be questioned.

The midfield linchpin has elevated himself into this group of world-class players not just by filling the void left behind by Kante, but also by improving on his performances every season and little wonder, following his two full seasons with the Premier League side, the Nigerian became a target of top European clubs Real Madrid, Barcelona and Manchester United.

Despite the interests, the Nigerian remained committed to Leicester City. 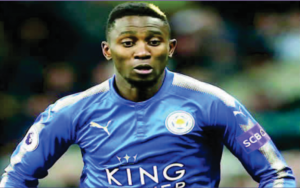 Before the close of the last transfer window, the Lagos-born midfielder once again became the subject of many transfer speculations, with Madrid again at the centre of it all.

The Spanish giants and champions of Europe, made a return for the Nigerian to fill in for the departed Brazilian Casemiro, while Barcelona were also in the market for a replacement for the ageing Sergio Busquets.

Manchester United and Arsenal were also not left out of the chase for the midfield genius, and like in the previous years, he once again chose to stay put with the Foxes.

He’s had to play several roles since his arrival from Belgium. There was a brief dalliance with a spot at centre-back last season, which did little for him.

He may be an expert ball winner, but Ndidi is certainly no central defender.

This season, he has also had to play as a central defender, with manager Brendan Rodgers preferring to play BoubakarySoumare at the base of his midfield. Ndidi’s deficiency in possession was put under the microscope when he cheaply gave away possession to allow Rodrigo Bentancur score for Tottenham Hotspur.

Maureen Davies, a Manchester United fan, also said, “Ndidi has been recently prone to injuries but he is still a good player. It is best for him to move now that he still can.”