By Ikeugonna Eleke and Chioma Ndife

Despite the counter directive issued out by the Anambra State Governor, Sir Willie Obiano, for the state’s workers to resume their official duties on Mondays following an earlier directive given by the Indigenous People of Biafra (IPOB) for observance of Mondays as work free days, the workers in the state have however remained adamant in their decision to shun work.

There were skeletal economic activities in parts ofAnambra State last Monday, despite repeated directives by the state government to indigenes and residents to ensure return to normalcy.

The Anambra State Commissioner for Information and Public Enlightenment, Mr C. Don Adinuba, had in a press release called for full economic activities in the state, reminding all that the Indigenous People of Biafra (IPOB) had long rescinded its decision to ground the Southeast Zone.

IPOB, on the other hand, had through its media and publicity secretary, Mr Emma Powerful, vowed to go after the enforcers of the previous but now suspended sit-at-home order.

Fides crew who moved round Awka, the capital of Anambra State, last Monday, observed that though there was a marked improvement in the level of economic activities witnessed on previous Mondays, it could however not be said to be viable enough as witnessed on other week days. 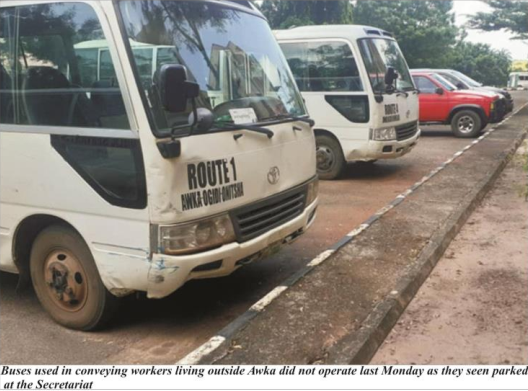 Fides observed that as at 12.30 pm, workers were seen leaving their offices for their homes due to the inactivity at their work places. It was gathered that the official vehicles which usually convey government workers en-route Awka-Agulu-Ekwulobia;Awka-Ogidi-Onitsha and Awka-Awkuzu-Otuocha; were parked at the state secretariat and non-operated on the said Monday.

The compound of the state secretariat was not also cleaned as the daily sweepers did not carry out their duties, leaving the whole compound in a nasty situation.

There were however improved returns to commercial activities on Monday in some parts of the state. In Ontisha, Awka and Nnewi most markets opened but the few traders that were sighted on ground were greeted with low patronage as there were a low turnout of customers.

A fuel pump attendant at CAPAD Filling Station Okpuno, JohnPaulDimude, who spoke with Fides, complained of low turnout of customers, saying that they opened due to the directive issued by the state government.

Speaking to Fides, a staff of the Ministry of Agriculture who pledged anonymity, commended the turnout of workers, saying that over forty percent of the ministry workforce turnout for work following the directive. He noted that others might have gone to the field to execute one task or the other as the majority of their daily responsibilities was usually done outside the office.

Contributing, a security personnel at Jerome Udoji Secretariat who craved anonymity, disclosed that almost all the workers complied with the directive and revealed that most people did not stay beyond an hour after signing in their names in the attendance register. He also said that the official workers’ vehicles did not ply their usual routes.

Fides also noted a remarkable improvement in transportation. Transport workers that had hitherto complied with the sit-at-home directive, resumed work on Monday. While motor parks were still closed, the popular pick and drop buses were seen plying Awka-Ontisha route, among others, which was formerly not the case.

Bank staff members were also sighted in banking halls, even though they refused to open their doors to customers. Schools, both primary and secondary, especially those owned by the state government, however remained closed, while education office in the state was open, with the Permanent Secretary, Mrs. NwandoObiano, seen in the office with her members of staff carrying out their official duties.

Fides reports that some schools also failed to open for educational activities, just as civil servants were not in their offices despite threats by the Anambra State Government.

A visit to Jerome Udoji Secretariat, which houses almost all the state government ministries, showed very minimal activities as only a few workers were seen. Also limited vehicles were found in the expansive compound of the secretariat.

A senior civil servant in the Ministry of Information attributed the absence of workers at their duty posts to sheer laziness.

‘How will one explain his or her absence at work on a Monday? If you visit offices, you will find that mostly senior civil servants are the ones who came to work today. So, where are the others? Yesterday was Sunday, and the previous day was Saturday, which were all work free days. So, what will anyone be doing at home on the first day of the week?’ he queried.

A visit to Eke Awka and Zik Avenue showed also that businesses were open, just as traders at Eke Awka Market were seen displaying their wares. A dealer in food stuffs, Mrs Eunice Okolo, said, ‘Yes, we are happy to be here for business today, maybe you people should tell customers to start coming.’

IPOB had months back declared every Monday a day to boycott work, as a means to press the federal government to release its leader, NnamdiKanu, who is standing trial for treasonable felony.

The group however called off the exercise after two Mondays, but since then, every Monday in the Southeast has left towns in the zone with deserted streets.