After the Nigeria-Biafra Civil War in 1970, the then Nigerian government had forcefully taken over the ownership and control of all educational institutions from the mission who were the original owners. The government had condemned the educational practices and policies of the mission on the ground that it encouraged moral instruction and enforced discipline, hence, justifying its takeover of mission schools.

Many years after the forceful takeover, the results were poor management, dilapidated infrastructure, mismanagement of public funds, poor teaching and learning, as well as increased vice among the students. 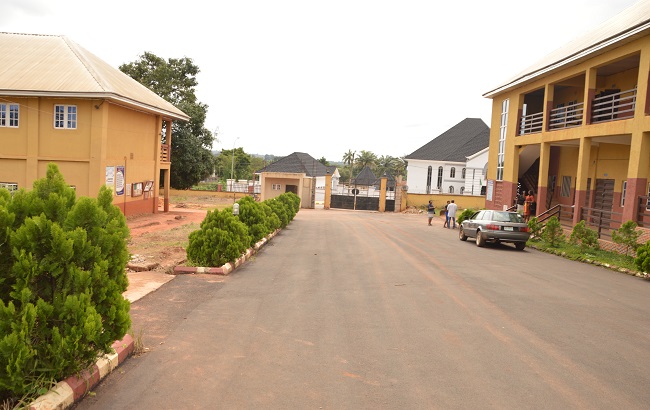 A part of the new Bubendorf Memorial Grammar School, Adazi-Nnukwu, seven years after its return to the mission

This remained the case until former Anambra State governor, Peter Obi, audaciously returned the schools to their missionary owners. Ten years down the line, Fides launched a documentation on some of the returned schools, with the stakeholders telling their story.

At Bubendorf Memorial Grammar School (BMGS), Adazi-Nnukwu, Anaocha LGA, Anambra State, on September 10, 2020, the Management, some members of staff, students and ex-students of the school, who spoke to Fides, said the mission had restored sanity to BMGS.

In an interview with Fides, the Manager/Principal, Bubendorf Memorial Grammar School, Adazi-Nnukwu, Rev Fr Theodore Chukwuedozie Ekwem, who said he assumed work in 2013 after the return of the school to the mission, described the old Bubendorf he met on ground as a school that was totally dilapidated.

According to him, BMGS, after Adazi-Nnukwu was returned to the Catholic Diocese of Awka on March 15, 2013, he assumed duty as an interim manager on April 23, 2013, and later the substantive Manager, and currently, Manager/Principal.

The Manager/Principal observed that due to what he termed neglect and poor managerial capacities, and total disregard by the government prior to the return of schools, a lot of things went bad. He said the Bubendorff School he met was desolate and had only one building that looked like a classroom.

‘Other buildings had leaking roofs, destroyed windows and were without windows. Students were jumping in and out of the open classrooms and the school premises. I went through secondary school and they were not like that. So, for me to see that, was one of the greatest shocks I ever received in my life, because it was unimaginable.

‘When you have about 13 to 15 persons who claimed to be living as boarders, you will be wondering how on earth a parent will allow the son to be harboured in this kind of environment. There was no perimeter fencing; the entire place was overrun by bushes due to total neglect,’ Fr Ekwem said. 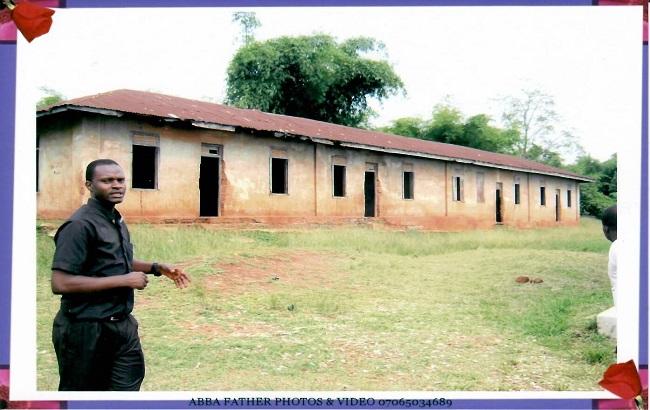 Part of the old buildings that served as a classroom before the return of the school to the mission. The picture was taken in May 2013. The School Manager/Principal, Rev Fr Theodore Ekwem, looks on

The principal, who took Fides through the history of the school which was originally established in honour of the first parish priest of Adazi-Nnukwu, Fr Albert Bubendorff, for the community to establish and the Church to manage, noted that BMGS had good management from 1959 when it had Rev Fr Umani as its first principal, till 1970 when the government took over the school.

He recalled that the Catholic Church under Onitsha Archdiocese, led by Francis Cardinal Arinze, refused to be paid off by the government and insisted that the schools be returned.

Rev Fr Ekwem, who said he had some sense of joy over what the school had become, seven years after the return, noted that BMGS, Adazi-Nnukwu was among the neatest schools in Anambra State.

His words, ‘Seven years after, I think we witnessed what I will call a miracle. In fact, I think the place we are seated is a place I will call a place of encounter. Because, when I came in I was angry; I questioned why the Church accepted the desolate place called school. You couldn’t see beyond about 2 metres, as everywhere was surrounded with bush. The entrance was erosion prone and there was difficulty driving around.’

He continued, ‘In the midst of thoughts, I encountered a voice which said to me, ”You can’t do it alone. You need the assistance of the saints”. I started asking which saint. The saints I am very familiar with: Mother Theresa of Calcutta and St John Vienna, came to my mind and I said, ”No, this is a boys’ school and it is not a seminary”. The voice said, ”John Paul II’, and I said he is not a saint. The voice said, ”But he is a blessed and will soon be a saint”. I invited him to join in the job.’

The Manager stated that most of the renovated and new buildings which gave the new BMGS its good look were sponsored by benefactors. This was even as he revealed that the school received a total of N25m as subvention from the Anambra State Government during the time of Sir Peter Obi.

Fr Ekwem also identified the ICT Lab that was built by the Nigerian Communications Commission, a constituency project that was attracted by Senator Umeh, as one of the great projects of the new BMGS.

Among the benefactors of BMGS, according to the manager, were Senator Victor Umeh, who renovated five class rooms and is currently building a chapel (church building) for the school; Mr Patrick Ubajiaka; the late Emeka Nwankwu; Engr Uche Ubajiaka and Mr Opigo Nwankwo, who renovated one classroom each.

Fides gathered that other benefactors were the CEO of Peace Mass Transit, Chief Sam Onyeishi, who facilitated a new hostel block; the National President of BMGS Alumni Association, Chief B.O.B. Ugonabo, who facilitated the new admin block; Mr Patty Ubajaka and Mr Kanayo Nwafor, and other friends of Fr Ekwem who sponsored the Reverend Fathers’ House, as well as Judy and Greg Lucas (the priest’s friends from USA, who facilitated the school’s St Anthony of Padua’s Clinic.

The principal thanked God for the growth of the school, which, according to him, had about 300 students at the time of the return of the school to the mission in 2013, and currently had a population of 1,121 students, out of which 951 were boarders, and 96 tutorial and non-tutorial staff. 26 members of the staff were said to be in government’s payroll, while others were paid by the school.

Rev Fr Ekwem, who recalled how students were prone to truancy and were still on their way to school at 9 am, and how the students molested and harassed even their teachers, said the students had now turned out to be better individuals and were more responsive due to the takeover by the mission; even as he noted that the school could currently boast of students with better character formation.

The manager said that he felt fulfilled that seven years after, the Church had done well and would do more in the management of BMGS, Adazi-Nnukwu.

The principal/manager explained that the school engaged the students in programmes that were international oriented in partnership with Luxthera Foundation and intensified moral classes. The outcome, according to the manager, was that the students improved in character, academic work and all-round formation.

He appreciated the old boys of the school, the PTA of the school and some individuals of the community, such as Igwe Prof Augustine Obiekezie, Adama of Adazi-Nnukwu; Engr Theodore Eze; Chief John Arachie; Engr CY Anaeto and the successive presidents general of Adazi-Nnukwu, for their support.

One of the oldest teachers of BMGS, Adazi-Nnukwu, Mrs Scholastica Nonyeluchukwu, while speaking to Fides, said the mission had restored sanity to schools.

Mrs Nonyeluchukwu, who is the second Vice Principal (Admin), decried what she termed the very dilapidated state of infrastructure and collapsed education standard in the school prior to its return to the Catholic Diocese of Awka.

The teacher, who shared her experiences in the hands of some bad boys of the Old BMGS, said she was a victim of their bullying and recalled how an SS I student almost beat her up, and how some of the old boys used to drag other students to their hideout to beat them up.

Mrs Nonyeluchukwu however said with the takeover of the school by the mission, such activities and poor academic standard had become history in the school.

Also speaking to Fides, an old boy of BMGS and currently a Biology teacher in the school, Peter Onyekachukwu Omobe, described the return of BMGS, Adazi-Nnukwu to the mission as the best decision by the government.

Omobe, who said he was an auxiliary teacher before he studied Computer and Biological Science Education in the university, narrated how the so-called bad boys of old Bubendorff threatened to break his head in the school.

The Nkalagu, Ebonyi State-born Omobe, observed that the school before the return, was where bad boys thrived. He thanked God that his head, was not broken, though, according to him, he had tough experiences for the six years he was a student.

According to him, students had since ceased from hiding under the underground tanks and engaging in various immoral behaviour at their no man’s land and other hidden locations which previously existed in the school.

The Biology teacher, who recalled that he was in JSS3 when the school was returned to the mission, said most students, who could not adapt with the new rules of discipline in BMGS left the school.

He narrated how the Manager, Fr Ekwem, chased a masquerade with a cane after some students disobeyed the manager’s directives and disrupted academic activities and took to masquerading. According to Omobe, when Fr Ekwem eventually caught up with the masquerade, he knelt down and begged the priest. He said the student, who was under the masquerade cover, left the school the next day for fear of abiding by the rules.

An SS 3 student of the school, Chimezie Stanley Enekwechi, who recalled how the senior students bullied the then junior students when he was in JS I, thanked God for what he termed the rapid growth of the BMGS in academic work, morals and infrastructure, within the seven years of its return.

Pointing out that the maltreatment of the students and teachers at a desolate place in the school known as no man’s land by those who were believed to be cult guys was a thing of the past, the Nise, Awka South LGA, Anambra State-born Enekwechi, said the Manager fought truancy, indiscipline and immorality in the school.

He observed that the cases of many students ending their classroom activities after break had prior to the return to the mission, become a thing of the past. He said students now studied as expected and discipline was maintained.

Other students and members of the alumni association who spoke to Fides, all attested to the fact that the education and proper formation of the students had improved in the school. They described the return of BMGS to the Catholic Church as a great feat.

Speaking at a media session at Fides, September 23, the former governor of Anambra State, Sir Peter Obi, said the need for total sanity in the education system necessitated the return of schools to the mission. He expressed his delight that the Church had not failed in the proper management of the schools returned to her.