Anaku, a community in Ayamelum Local Government Area of Anambra State, was a no-go area, Tuesday, January 26, as men, women and youths cordoned off the major road leading into the town as they protested the continued missing of their kinsman, the immediate past Commissioner for Tourism, Anambra State, Dr Christian Madubuko, reports Jude Atupulazi.

Madubuko who resigned his appointment with the Anambra State Government on December 31, 2020, after citing frustrations in the hands of those he described as a cabal, had alleged threats to his life by some unnamed agents of the state government. But on January 13, barely two weeks after he resigned, he was reported missing by members of his family. 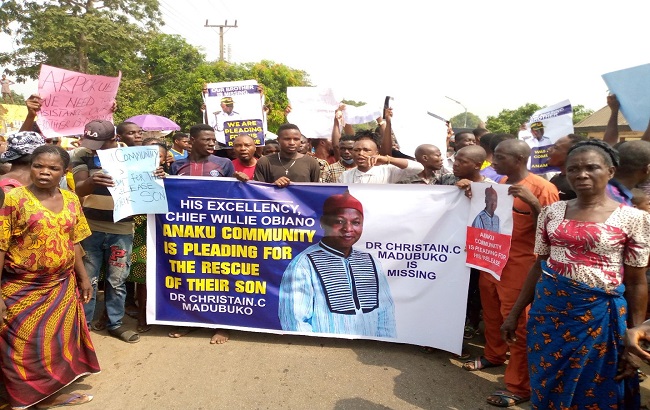 We want our son back! Anaku community demands as they protest against their kinsman, Dr Chris Madubuko, ex-commissioner in Obiano’s cabinet. Dateline: Tuesday, Jan 26, 2021.

The protesters, who trooped out in their numbers, carried placards with various inscriptions, all calling on the state government to help in having their kinsman returned safely. They moved around the town, chanting songs and stopping vehicles from passing through.

An elder brother to the missing commissioner, Richard Madubuko, told newsmen that their brother had been missing for 13 days, with his phones being switched off since then.

‘For 13 days now, we have been searching for our brother. We saw him last around 10th or 12th January, but on the 13th we heard news that he had gone missing. We reported to the police but they said that he was not kidnapped but went missing,’ he said, adding that the police extracted N115, 000 from the family for sending signals and for tracking their brother, respectively.

The family said that the last place the ex-commissioner visited was the secretariat of the All Progressives Grand Alliance (APGA) in Awka where he went to sign papers for the constitution of a caretaker committee for their community.

The APGA state secretary, Barrister Tony Ifeanya, confirmed to Fides in his office last Wednesday, that Madubuko actually visited him at the party secretariat on Wednesday, January 13, after which Madubuko left.

Ifeanya said he was shocked two days later when he received a phone call at midnight from a person who told him that Madubuko had gone missing.

He promptly made strategic calls and soon convened a meeting of stakeholders where money was raised and given to some people to facilitate the return of the missing former commissioner.

Ifeanya however expressed regret that the matter had assumed a political coloration, with some members of the family of the missing man insinuating that the state government was responsible for what happened.

‘This is a planned attempt to rubbish the party and the government,’ he alleged, wondering why anyone would be alluding to a kidnap when no one had witnessed it and when no ransom demand had been made.

He therefore dismissed such talk as mere propaganda by those intent on dragging the name of the government in the mud, even as he said he could not vouch that the man was missing in the first place.

When Fides contacted the state police image maker, Haruna Mohammed, he confirmed the incident, saying that the Commissioner of Police, John Abang, had ordered for a thorough investigation into the matter; even as he dismissed the allegation that police collected N115, 000 from the family.

He directed the family, however, to write a formal petition to the CP so that investigation could be opened on that.

For his part when contacted on the phone, the Anambra State Commissioner for Information and Public Enlightenment, Mr C Don Adinuba, who said he had not been around for some time due to ill health, said it was the duty of the security agencies to track Dr Madubuko whom he described as a very close friend; even as he frowned at the attempt to make the state government look culpable.

For now, the whereabouts of the former commissioner remains unknown. Fides learnt he was supposed to join his wife in Australia on the weekend of the week he went missing. He was based in Australia from where he was appointed by Gov Willie Obiano to serve in his cabinet.

Is he being held in captivity by some people somewhere? Is he faking his kidnap or disappearance as some people insinuate? Only time will tell.