How time flies! The Latin people would say, “Tempus fugit.” The Germans say, “Die Zeit fliegt.” I celebrated my fortieth birthday as a post-graduate student in Germany nineteen years ago. By coincidence I was born on April Fool Day. It is generally said that a fool at forty is a fool forever. Thank God I became a wise fool at forty. Therefore, I am not a fool forever. A person born on Sunday is normally named Sunday. Someone born on Monday goes by the name Monday. There is also someone who answers Friday because he was born on Friday. What then do we call a person born on April fool day? I overheard someone who says, “He should be called Fool.” Is the person correct? Fortunately my parents were not courageous to name me Fool. Instead they put heads together prayerfully and named me Amaobichukwu (abbreviated as Amobi), which means ‘No one knows God’s mind.’ Only God knows why I was born on that foolish day. Let us stand and give a sound applause to my Creator. I also thank my parents who formed me in secret in Jos, Plateau State. At the fullness of nine months, I was born a bouncing baby boy (BBB) on 1st April 1963 at Central Maternity Jos. I landed from my mother’s womb at exactly 12.05p.m. In other words, I escaped being a complete fool by five minutes. To God be the glory!

It happened that on 1st April 2003 in Germany, being my fortieth birthday, one of my German friends presented me a beautiful flower worth 20 Euro. I accepted it with mixed feelings of joy and sadness. My sadness outweighed my joy. Why? As a student, the twenty Euro, which was the cost of the flower, was more beneficial to me than the flower itself. What is the essence of flower to me as a student in need in a foreign land? If the donor had consulted me I would have asked him to give me the money worth. On the contrary, the Germans value flower so much. How can a hungry man be admiring flower? Nonetheless, I kept the flower known as ‘Blumen’ in German Language at a conspicuous corner until the day of my return to Nigeria. Before my departure, I gave it out to my Cameroonian friend. He laughed at me and asked me to put it in my luggage as evidence. The flower is still lying idle in my box for many years now. Please call on me if you need to buy it. The cost is now over a hundred Euro. 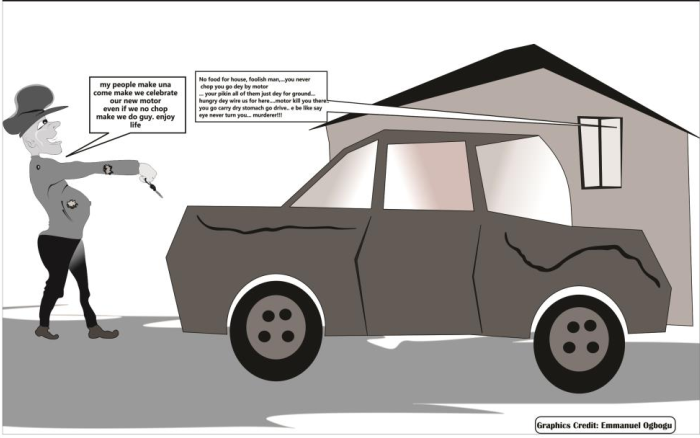 A certain married poor man who eats from hand to mouth surprised his idle wife and five children one day. He went to market and bought an old car with all his life savings. This threw the wife and children into mourning. They cried over two hours when they saw the worn-out car. First, what is the essence of buying the car when the family of seven manages to eat once a day? Secondly, the children are at home because of none payment of their school fees. But for the husband and father of five, he wants to be a car

assistant young priest to another parish due to misunderstanding in nomenclature. The Bishop asked him, “What do you mean by nomenclature?” He opened his mouth and closed it for lack of words. The Bishop sent his secretary to the parish to make enquiry over the nomenclature palaver. The secretary did his job and reported to the Bishop that the house dog and the assistant priest are called Wisdom. In his judgment, the Bishop ordered the parish priest to sell the dog instead of asking for the transfer of the assistant young priest. Reluctantly, he sold the dog and became unfriendly with his assistant priest. In addition, he mourned the dog for a period of six months.

Since the month of February 2022, the Academic Staff Union of Universities (ASUU) has been on strike in Nigeria over face-off with the Federal Government due to mode of payment for university lecturers. Consequently, the students have been idle at home. During the impasse, our politicians spent millions of non-refundable money to purchase interest forms for presidential and other designated political offices. Each presidential candidate of the ruling party bought the form

at a hundred million Naira. About ten of them did so. At last only one of them won the primary election as the highest bidder in terms of oiling the palms of the delegates. When the millions of Naira are gathered together, it would have sufficed to settle the university lecturers demand, so that our idle students can go back to school. A lot of money is in the hands of our politicians. How do they acquire the huge sums of money when millions of Nigerians are wallowing in abject poverty?

A wise bird popularly known as Eneke in Igbo land said that since men have learnt to shoot without aiming, it has also learnt to fly without perching. Experience, they say, is the best teacher. Everybody must cut his or her coat according to his or her seize. First things ought to be done first. Likewise, more important things should be done before less important things. For instance, a poor hungry person should eat enough food before looking for meat. Even one can eat without meat. Instead of eating two pieces of meat in a hotel and go away hungry, it would have been better to forego the meat and order for more food. A person who has no common tea to drink, should not look for over-tea. The break is the most essential component of a car. Therefore, a car driver without break should sell the car and buy break. What is a man without money looking for inside a bank? When I was in studying in Germany, I went into a bank one day for currency exchange. The cashier asked for my bank account number. Without mincing words, I told him that I had no bank account. He sighed and looked at me suspiciously. Immediately, I disappeared like a ghost before they hand me over to police. My demand was later solved in the black market. What is a baldheaded man looking for in a barber’s shop? What is a poor man looking for in a vehicle assembly? What is a bachelor or spinster searching for in a marriage tribunal? Is he or she there for research or for marriage dissolution? Can a saint be found in hell fire?  When we were in first year philosophy in the seminary, a certain seminarian went to the Vocation Director and asked him how a bishop is appointed. The priest Vocation Director fumed at him and shouted, “Get out of my office! You are not yet a priest but over ambitious of becoming a bishop.” I am tired. Let me rest for now, because health is wealth.

owner. The worst is that he is uncomfortably managing one room with his wife and the five children. If he had applied the law of priority of value, he would have paid the children’s school fees and start molding blocks for a three-room apartment. Unfortunately he drove the old car for two weeks only and it got spoilt beyond his capacity. All the money he invested on it was gone. The wife is doing nothing. The children are not going to school. What a misplacement of priority!