The Anambra State Commissioner for Youth Development, Mr. Patrick Aghamba, has provided laptop computers and certificates of participation to 21 Youth Desk Officers that participated in a 4-week ICT training programme.

The training, which was concluded recently, had 34 desk officers registering at the inception with only 21 of them following till the last day. It was themed, ”Digital Skill Acquisition for Self Reliance”.

The ICT training was held in conjunction with the Anambra State Information & Communication Technology Agency and Pacent Technologies Ltd.

Speaking during the closing ceremony, the commissioner said the ministry had positioned itself to take the lead in revolutionizing the state into becoming a digital tribe as Anambra drove its vision of becoming a smart mega city.

He stressed that the graduation was not an end goal on itself but a part of the larger journey of the task ahead.

According to him, Gov. Chukwuma Soludo was totally committed to the youth development of the state, hence the budget of the Youth Ministry was increased from ₦500 million to ₦2.5billion in the draft revised 2022 Budget. 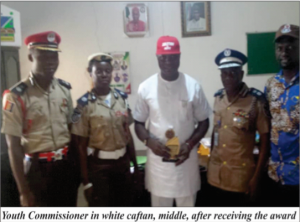 In a goodwill message, the Commissioner for Local Government, Chieftaincy and Community Affairs, Mr. Collins Nwabunwanne, said that much was expected from the officers in their various duty posts.

He asked them to have a good working relationship with their colleagues and be good team players.

He said the event was one of the official assignments he had undertaken since he assumed office, pledging the agency’s readiness to partner with the ministry.

The Permanent Secretary, Dr. Daniel Ezeanwu, enjoined the youths to apply all the mechanisms they had learnt in the training into their jobs wherever they were posted to after the training.

The Chief Executive Officer Pa-cent Technologies Ltd, Dr. Ikechukwu Umeh, said he was happy to partner with the state government in ensuring that its workforce was trained in ICT, describing it as an important factor globally.

Some of the participants, Mrs. Chinyere Ezeani, Mr. Chibuzor Udeh and Miss Onyinye John, expressed gratitude to the youth commissioner whom they described as a leader who believed that the human capital development was the bedrock of society.

The youth desk officers rendered appraisal songs to draw the curtain at the ceremony.