The Commissioner for Women’s Affairs and Social Welfare, Mrs Ify Obinabo, cuddling a child belonging to a mentally challenged woman. 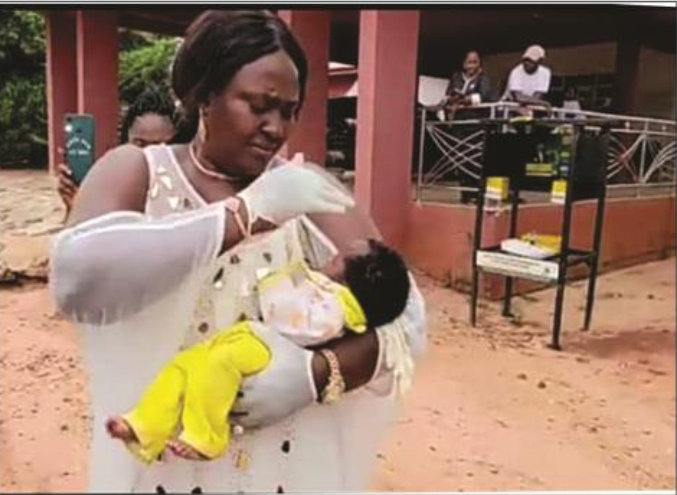 A mentally challenged woman, whose name was not immediately ascertained, has fought officials of the Ministry of Women’s Affairs and Social Welfare over an attempt to separate her from her newborn baby.

The incident happened in Awka, Anambra State, where the officials attempted to take the baby from her to a home and also take the woman to a mentally challenged people’s home for care.

The Commissioner for Women’s Affairs, Mrs Ify Obinabo, who narrated the story, said the strong bond between mother and child was the reason the woman fought the officials, despite her condition.

Obinabo said: ‘The mentally challenged beautiful young woman fought tooth and nail to ensure the protection of her baby.

‘The expression was witnessed today (Sunday) at the Women’s Development Centre, Awka, when social workers at the ministry tried to separate the mentally challenged woman from her new born baby.

‘The separation became necessary so that the woman could be taken to a home for the mentally challenged for care and her daughter to a children’s home,’ the commissioner stated.

She said social workers from the ministry had rescued the mother and her child at Nnewi and that she had previously resisted attempts by some people to snatch the baby away from her, but accepted to follow officials of the ministry with her baby to Awka.

In a short video posted by Obinabo, the mentally challenged woman was seen charging at ministry officials after the rescue when they attempted to separate her from her baby to take them to different homes for care.

The woman was heard shouting in Igbo: ‘Nothing must happen to my baby. If I look for that baby and fail to find her, I will deal with all of you.’

Obinabo said she discovered too that the baby needed medical attention and that they were taking her to the hospital. She thanked God that the mother and child were rescued and pledged that proper attention would be given to them.