Memoirs From A Fatherless Child : Dad, After You Left

This week on Inspirational Personality Page, we have deliberately and carefully culled out one of our interviews from years ago, in a bid to refresh the minds of our readers the story of an inspiring fellod

We have often heard it said, “when life throws you a lemon, make lemonades out of it”. Such can be used to exemplify the life story of Mr. Osita Eze, who at a very tender age felt the trauma of living without a father, faced the harsh realities of life with his single mum and contended with the society that has no sympathy for the weak.

Though he described himself as a work in progress, he is seen by many who come across his writings as a victorious soldier who battled the maladies of life at a tender age and came out victorious.

Let me present to you a budding author, loving husband, and caring father, Osita Eze (O’star).w that could keep one enthuse

How can we best describe Osita Stanley Okechukwu Eze?

Ostar Eze is this seeker trying to make sense out of life. He is this Nigerian, Igbo guy trying to keep to the rules in a lawless society and ultimately, a survivor trying not to step on too many toes before leaving the surface of the earth.

I am the first child in a family of four children, born in the Northern part of Nigeria. During one of the Northern crises, my family had to leave the north for the village. I am from Umuezeagwu clan, Ekwulobia, Aguata LGA Anambra state.

I am an Educationists by training and a journalist by practice.

As for my educational background, I am an NCE holder, I also have my BSc degree as well as  a Masters degree in Educational administration and planning. By God’s grace, I have applied for my PhD

When we first came back, there were a lot of discomfort, so we had to move to Oko, where I continued my education. Schooling in Oko, where my Mum was a teacher, my grand mum and granddad were teachers too. So, in Oko, my Mum was able to secure a job in bourgeoisie primary school, so I got a lot of exposures back there. 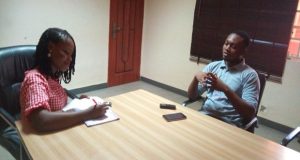 It was in primary five that my dad left us, and we never heard anything from him again. Things became so sour that we could not even maintain the house we got there. Back then teachers were regarded as church rats because they were paid so little  compared to now.

So, my Dad’s friend called my mum over to help him set up his school at Nnewi, Kiddies Montessori, Otollo, Nnewi. After a few years, something happened that we had to go back to the village. So, when we got back to the village, I had to take my common entrance out of primary school, and I gained admission into Aguata high school.

As a Community Secondary School student, nothing was happening there. After assembly in the morning, no classes held, some students would go out of school for stunts without being reprimanded.

With the nature of my upbringing, I had to most times, spend my time in the library, even at that, the books were old and worn out. So, with long time seeking for knowledge, I encountered Williams Shakespeare, Charles Dickens and many other interesting authors and characters.

St. Peter’s then was an all-boys school, and I toed the science path, incidentally, some people told my mum that if I continued in that school, I was bound to join the bad gangs. With the way my mum was, she had to take me back to Community Secondary School, Ekwulobia, where I had to repeat a class.

Due to my quest to study literature and that passion to write, I wanted going back to be an Art student, but you know our society does not help students define themselves, no form of counselling and this had left many to lose track of what they had initially wanted to be.

I had those traits to be a communicator, but I had no proper lead. Though we had career days back then in school, but it was not properly carried out.

When did you start writing?

I have been writing all my life. I am an introvert, so I express myself better when writing. Even back then, any time I had issues with my mum or my siblings at home, I would rather write and then when my mum picked it, she would rather do the editing than knowing what my intent for writing the letter was.

Before I wrote “Daddy After You Left”, I had written a collection of poems, titled ”Cycles for The Love of Wisdom”, then other books of which I published too.

What stirred you into writing ”Dad After You Left”

I never intended writing a book on that at first. The thing is, I had always kept records of my life experiences, growing up without my father, the trauma accompanied with the circumstances surrounding his disappearance, even from primary school. After then, there were many other things that we suffered which impacted on me emotionally.

All our weeping, sobbing and gnashing of teeth. Laugh out loud…there was no gnashing of teeth though. But the experience of your father not being there, Mum suffering to make ends meet, innuendos from people who had negative contributions and perception of what had happened to us.

So, then I was reading and all that my Dad could not give me or tell me as a child, the books I read taught me.

Funny but interesting enough, I was reading, and I was writing, I constantly kept a list or snippets of things and happenings of people that maltreated us and negative things that happened to us. Again, was when I started working with Orient Daily, I was assigned a column, which was tagged Poetic License, (though, we no longer have that column now) there we got materials on the different genres of literature.

I then thought within myself, instead of waiting for people to send in contents, book reviews that took time, I had to write stories from my past, I then made it a series.

Interestingly, I started getting feedbacks from people who became drawn to the stories. Messages were sent to me on how they could relate to the story. So, I thought to myself, if people can relate with this my story, then I can make it better and publish, and that was how ”Daddy After You Left” started.

I had to do a lot of padding and cutting. Even though most of what I wrote was factual I had to mix it up with a bit of fiction, because most of the people in my story are still very much alive, so I wouldn’t want to offend sensibilities.

What kept you going during the dark moments?

One of the things was that I have a strong mother, the strength she exhibited robbed off on me and my siblings, she was always there for us.

Even though growing up was not easy, my mum kept us going. Primarily, it was her strength. More so, I dabbled into writing which to me is quite therapeutic. I kept a diary and each time, I pour out my thoughts, pains, sad moments and joyful as well.

Some people would not want to keep diaries because they feel people dabble into it and read all their secrets. But instead of hiding all those stuffs, getting frustrated, drink sniper and then die, why don’t you let it out through writing. Though that’s my therapy I don’t know what works for others.

Were you able to get over the pains of yesteryears?

Do we ever get over any pain? The only thing that happens is that time numbs the pains. The pains are always there and of course they keep us conscious.

What do you consider your greatest failure?

My greatest failure was not listening to my mother earlier enough. My mum would always warn me about stuffs. Because as a child, I had a very troubled spirit. I wish I had listened and worked with her advice earlier in life.

What do you consider your greatest achievements?

My greatest achievements? Hmmmm… I am still a work in progress. But I would say, mine was being able against all odds to secure my degrees. For financial reasons and other factors, I dropped out of school at a certain point and became a lay about in the village for some years.

People felt I was wasted, and my mum felt bad about it too. So, I had to start working and studying. I got my NCE, followed by my BSc and my Masters, and I just enrolled for my PhD recently. So, looking back from when and how I started, I feel it’s an achievement.

You have everything it takes to be who you want to be without messing up your life. Regardless of whatever you are passing through presently, you can still achieve purpose. Don’t stop seeking for knowledge and work hard because hard work still pays.

Again, there is more satisfaction when you earn from your work. Seek for self-actualization and realization.

Thirdly, believe in God, Yourself and what you can do.

I remember then in my family house three squared meal was a problem, and it seemed as if the world has ended then. But presently, things are better and brighter. Do not mess up your life during the trial period, so that when it gets better you won’t live your existence in regrets.

Life is like a school and it wants to examine you with trials which only forms you for the better days.

Your dreams and aspirations?

I look forward to seeing an Ostar Eze that is a better Father and spouse. A man who is more in control of his time, activities and one who calls his own shots.

Your advice for single parents out there

Single mothers especially, I think my mum is in a better position to talk about this, but I don’t think she would want to. My Mum is a genius but the problem is that she is not putting any into writing…hahhahaha(he laughs) mum I am sorry to say this but it’s the truth.

Okay, for the single mothers, please don’t loose your dignity because you found yourself in that situation. For whatever reason, do not trade your dignity for anything, because its maybe a determinant factor to whether you are going to remain happy or not.

Lot of women today, are in their middle ages who find themselves doing the wrong things end up in regrets that they can no longer contribute positively to the society, constituting nuisances because of the psychological backlog.

For the sake of your kids, find something to do. My mum then would go to riverine areas to get vegetables and then bring to town to sell in the market, after that she still dresses up to go to her work place. She (my mum) was into selling second hand clothes(okrika) and she then made it big in the business, she was then travelling to Cotonou, even at that, she was still active in church.

Get yourselves involved, with productive ventures, then you will get less abuse and intimidation from the society.

Advise to youths out there?

Hmmmmm… discover who you are, develop yourselves and make impacts. The solution to the falling society is in our hands. Youths should find their niche and impact the society. But if we keep wailing and gnashing our teeth nothing will be done.

My book right now is published on Amazon though I intend to publish on different platforms.