Mbaka Versus Obi; Soludo Versus Odumeje – the Voiceless Majority Speaks

Call me an optimist, call me a pragmatist. The social media spectacle resulting from an unprovoked outburst of Fr. Mbaka against Peter Obi in the end has so much good in it for the benefit of the common good.

From the beginning of the encounter between the two, Fr. Mbaka presented himself as the bully, exploiting every available space within this bully pulpit to heap it unto Obi, whose access to the public microphone was limited.

Even when an opportunity became available, Mr. Obi chose the high moral route of not fighting back, citing his deep respect for the Church and the sacred office occupied by Fr. Mbaka. In the end, Mr. Obi became the victim who very much cared less about his bully. 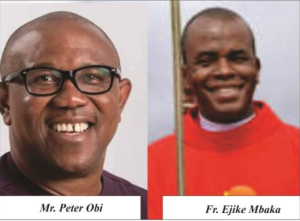 What then is positive about this encounter? That encounter gave the voiceless majority a point of reference to prove that they can recognize and appreciate integrity when they see it. Within hours of Fr Mbaka’s maligning and mischaracterizing outburst against Mr. Obi, the public came out in defense of Obi’s integrity. Catholics, non-Catholic Christians, Muslims, and traditional believers, saw in the encounter between Fr Mbaka and Mr Obi some of Nigeria’s major problems – the mismanagement of public fund and the unholy romance between the political elite and the religious elite.

Fr Mbaka’s characterization of Obi as a stingy man became a potent metaphor for the voiceless majority to, for the first time, become part of the national dialogue on how our common fiscal resources are managed by our political elite. The resultant slogan “We no do give shishi”, regarding the use of public fund, has metamorphosed into a virtue expected of an elected representative of the people. Obi’s alleged stinginess is appreciated by the voiceless majority.

The voiceless majority came to the defence of the clearly perceived victim of misplaced understanding of how public trust should be managed. That encounter propelled Peter Obi to the listening public yearning for honest political leaders.  As the “necessary sin” (felix culpa) of Adam made the Easter celebration a joy, so does the “necessary sin” of Fr Mbaka seem to be positioning Nigeria for a social-political and economic Easter, should Obi pull this movement to a successful presidency! 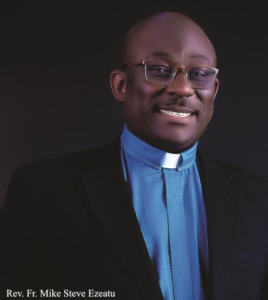 Yet another encounter in another circumstance!

Then comes the demolition of a part of Odumeje’s church by the agents of the Anambra State Government led by His Excellency, Prof. Chukwuma Charles Soludo. While the details of the encounter between Odumeje and the security team at the demolition site are slowly coming out, one thing that has roused the sensibility of the public is the slapping of Odumeje by the security team.  The public has come out and roundly condemned it.

A certain video clip is circulating showing Odumeje jumping on the excavator that was pulling down part of his building. Other than that, what exactly happened prior to the slapping of Odumeje is not clearly known, but the public is not willing to justify slapping Odumeje under any circumstances. It is not necessarily because Odumeje is the perceived victim here. I believe that the public outcry would be the same if any other citizen was slapped as Odumeje was. Citizens are aware of their rights that cannot be violated. Might should not be right, is a summary of the public opinion regarding the encounter of Odumeje and the state security officers. Public officials should be professional and respectful of the dignity and rights of citizens, period.

The first public reaction tended to portray the government led by Prof. Soludo as a bully. However, as more information gradually emerges, public opinion, without excusing the physical touching of Odumeje, shifted and Soludo was perceived as a person with both integrity and respect for the rule of law, as it affects everybody and not just certain section of the population.

Latest information has it that the demolition affected many other houses and buildings, including two Catholic churches. Soludo, himself, a Catholic, is not sparing the two churches illegally built along the waterway – that is not peculiar Nigerian practice to not give preferential treatment to who knows who while conducting public service. These illegally built structures constitute obstruction of water drainage thereby leading to flooding and stagnation of water, creating a breeding environment for mosquitoes.

It was also said that the government had reached out to the various owners of the illegal structures after serving them notices of demolition. The encounter between Odumeje and the security team went viral and the voiceless majority immediately condemned the physical abuse of Odumeje. At the same time, the public is also commending Gov. Soludo for serving the affected landlords several notices prior to demolition.

As more information emerge, the public are beginning see Gov. Soludo as a leader with a sense of fairness to every citizen, especially if the demolition is equally done to both Odumeje’s Church, Catholic Church, houses belonging to both rich and poor citizens. 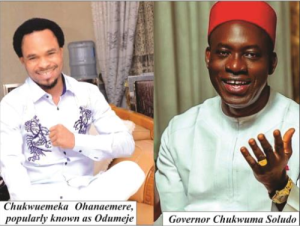 If Gov. Soludo keeps to rendering justice to everybody and not to citizens based on their social, political and economic class, his integrity will be appreciated by the public.  At that point, the unnecessary physical abuse of Odumeje by the security team will become once again, that “necessary sin” (felix culpa) that will lead Anambra State to a celebration of treating everybody equally under the law.

It may lead to a heightened awareness that no citizen deserves to be manhandled by any state representatives. However, it turns out, the voiceless majority has once again proved to know what is right and just, as regards safeguarding the individual rights of every citizen.

Finally, another striking commonality between these two incidents is the immediate and vocal response of the voiceless majority regarding proper custody of public fund on the one hand, and the deafening silence of the minority political elite in that saga on the other hand.  Why the silence? Because the alleged stinginess directly indicts our political elite since one can hardly see any of our political elite whose hands have not been soiled in the dirty crime of misappropriating public funds.

The same can be said about the silence of the same political elite in the Soludo/Odumeje incident. While the voiceless majority wasted no time to condemn the infringement on Odumeje’s human rights by an overzealous and unprofessional state agent, and commended Gov. Soludo’s sense of fairness, equity and professionalism; our political elite, including Odumeje’s political representative at both federal and state levels, have remained silent.

It does not take great intelligence to know what is right and noble when it comes to governance. Thanks to the social media, I believe that our voiceless majority has found a voice and they are speaking up. The awareness, consciousness, and responsible citizenry are growing in our land.

Hopefully, our silent and dumb minority, our elite with political power, can learn from the people they are supposed to teach that might should not be right. I am optimistic that we are heading towards an Easter celebration of the voiceless finding their voice, and their voice ushering in an era in which everybody has sacred rights that are protected and respected by our political representatives.

–   Rev. Fr Mike Steve Ezeatu, a priest of the Catholic Diocese of Awka, writes from USA.