Mbaka: Between Man and God

Some time ago, in the heat of a burning controversy between fiery Catholic priest, Rev Fr Ejike Mbaka of Enugu Catholic Diocese, and his Bishop, I had warned against the deification of priests by adherents. By that, I was warning against a situation where the faithful would begin to see certain priests/pastors as God himself, rather than as what they are: men.

I wrote that more worrisome was a situation where such men of God did little or nothing to dispel their perception as God or as the centre of worship. Nothing has changed even now. 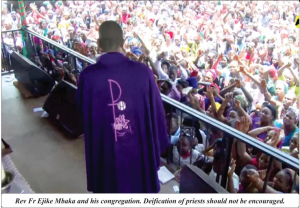 In Pentecostal churches and also the Anglican Church, it is normal to see pastors’ pictures and their wives’ being displayed boldly on posters or billboards ahead of important events like synods or crusades. Hardly can the picture of Jesus be seen in such situations. The meaning is that men are taking over the prominence which should have gone to God and that, to me, is not only vain, but a grand misleading of the faithful.

In the Catholic Church where such displays are more subdued, it is however a different scenario among priests who run ministries. While their pictures may not always adorn their posters when some events are taking place, such priests are seen by their followers as God himself and this explains why such places are immediately deserted once the centre of attraction (the priest) is transferred. When such happens, the worshippers follow the priest to his new place as though God only has presence wherever those priests are. That is not the way it should be, for sure.

Now, in the current Mbaka matter, the same scenario is playing out. After the Enugu Catholic Diocese allowed Fr Mbaka to introduce a priest that would merely deputize for him while he, Mbaka, cooled off in a monastery till January next year, Mbaka’s followers reportedly rejected the new priest and insisted that it was either Mbaka or nobody.

In a Church where the loyalty of priests is sacrosanct, such an action must be very disturbing indeed, especially after what happened in Ariaria Catholic Diocese in Mbaise where the faithful and the religious refused to accept a bishop posted there by the Supreme Pontiff.

We can see the after effects of that refusal in new developments in the Church elsewhere in the country today, the latest being in the Nnewi Catholic Diocese where protests trailed the bishop’s decision to relocate Spiritan Fathers from Ihiala to another place. There, indeed, seems a slow but steady, even ominous in the Church from loyalty to rebellion. It is so unCatholic.

This is why it is not always good to take certain actions, given their repercussion. Now the Mbaka saga is becoming a sore thumb in the Catholic Church which either needs to be cut off to save the hand or allowed to fester and become cancerous, leading to the cutting off of the hand itself.

This current sad situation would have been avoided if Mbaka had always downplayed his larger than life image before his congregation and explained to them that he was never to be deified. Mbaka may not be alone in this as evidence abound of such happening in many other places of worship run by priests.

When I watched a video of the Enugu Adoration Ground scenario, I did not see Fr Mbaka doing much to calm the roaring congregation which seemed incensed by what they saw as a ploy by Bishop Onaga of the Catholic Diocese of Enugu to remove their god (Mbaka) as they surged forward as if to attack the new priest before he was hurriedly taken away. Recall that the same crowd had carried out an attack on the premises of the Holy Ghost Cathedral in Enugu much earlier when they said they were looking for Fr Mbaka. This is quite tragic.

Overall, I think the Catholic Diocese of Enugu has not been handling the Mbaka matter with the decisiveness it requires, seeing that the priest has displayed a certain recalcitrance. Imagine coming out of the ban imposed on him by his bishop only to make another incendiary remark that has again set tongues wagging; even if some people have had what he said twisted to some degree, which forced Mbaka to release a video where he denied making such a statement and warned peddlers of the story to apologize.

But what I see in the latest matter as it concerns Mbaka is a man who seemed not to have learnt from previous mistakes and who seemed bent on heating up the polity quite unnecessarily. On top of this, I hear Mbaka is due to return from the monastery sometime in January next year, just a month to the general elections.

Would it not amount to setting the cat among the pigeons by allowing him to return at a time of heightened political tension in the country? Why not keep him tethered till after the election in order to let everything cool off? This is where I think another mistake is being put in incubation.

Beyond that, I think it is time the matter of the priest in question was decisively and conclusively dealt with. If I were the bishop in charge, I would send him to a seminary after serving time in the monastery. There is no doubt that he has embarrassed the Church enough. This is not a matter of sentiments. Anyone who saw the army of his followers raining curses on the Bishop of Enugu Catholic Diocese the last time before Mbaka was suspended would know that if this is not treated with the seriousness it deserves, what will come tomorrow may make the Ahiara intransigence a child’s play.

We have been embarrassed enough. What has been coming forth from the Adoration Ministry, Emene, Nigeria, is alien to the Catholic Church which has not been associated with doomsday prophecies triggered by ”stingy”  donations, while generous donations attract positive prophecies. This is not the Catholic Church we have always known and the Church should not hesitate in wielding the big stick to maintain the high esteem in which she is held across the world. The time for the Church to do that is now. Further procrastinations may do more harm than good.

I also suggest that the Church in Nigeria should further look into the issue of running of separate ministries by her priests. Any priest who is gifted should be holding his ministry in his parish so that those thronging to the place will be fully aware that the priest is under the authority of his bishop since it appears that when they see priests running ministries at separate grounds they think such priests are bigger than the Church as we are seeing now in the Mbaka matter.

The recent seeming ”small small” revolt against the Church should be decisively dealt with now before it spreads and becomes the norm. This is normally how these things start. Years ago it was unheard of for anyone or priest to disobey the Church or see a priest query the authority of his bishop. But it is beginning to happen now, from Ahiara to Enugu and now to Ihiala. Where will it happen next? The Church is too big for any such thing.

But before I round off, it is vitally important that priests who run ministries should educate the faithful on the difference between worshipping God and worshipping man. There is no reason why people should be seeing any man of God as God himself. Our God is a jealous God and will never want to see his position usurped by any mortal, whether consciously or otherwise.

From what is happening now it is crystal clear that many of the faithful are placing more faith in man than in God and that can be very dangerous. The danger was fully on display when the premises of the Holy Ghost Cathedral, Enugu got attacked by those sympathetic to Fr Mbaka. It was also on display when his followers rejected a priest sent to replace Fr Mbaka temporarily. These people are beginning to deify mortals rather than God. There is no way this can be encouraged.