The Archbishop of Abuja Catholic Archdiocese, Most Rev. Ignatius Kaigama, last Sunday said the Catholic Church in Nigeria would resist any attempt by any of its priests to engage in what he called personality cult in the name of adoration.

Archbishop Kaigama’s stand is believed to be in response to the recent outburst of a Catholic priest in Enugu State, Rev. Fr. Ejike Mbaka, in which Fr Mbaka accused the presidential candidate of Labour Party, Mr Peter Obi, of stinginess and said Obi would not win the 2023 presidential election unless he came to Fr Mbaka’s adoration ground to apologize.

Although Fr Mbaka would later apologize, following public outrage, his Bishop, Most Rev Calistus Onaga, barred the faithful and clergy of the Enugu Catholic Diocese from further participating in activities at the adoration ground.

That directive was greeted by a protest last Sunday by those believed to be Mbaka’s followers. They rained insults on Bishop Onaga and called for his removal. In another video, a man who did not even look as if he had been to church in a long while, was seen threatening to kill Peter Obi any time he saw him. 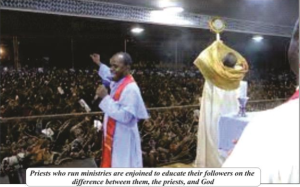 But while delivering a homily at St. Aloysius Catholic Church, Mpape, Abuja, Bishop Kaigama urged Catholic priests to take advantage of the loyalty and respect they commanded among the faithful to strengthen unity, peace and love among the people and communities, instead of otherwise.

His words, ‘Priests should not allow the Mass to become an occasion for drama, exaggerated inculturation or utterances that are purely political or mundane. People come to Jesus at Mass to get spiritually nourished by the word and the bread of life, and refreshed for the long, rough and tough journey to heaven.

‘To this end, approved Catholic adoration centres in Nigeria should really be for adoring Jesus in the Blessed Sacrament, not where to intimidate, manipulate and extort people or where a priest attempts to create a personality cult by careless and insensitive utterances and drama.’

There is no doubt that Bishop Kaigama’s admonition could not have come at a better time, given the dimension that the running of ministries is taking in the country. For some time now, many priests who run ministries have failed to impress on those who throng their ministries that they are followers of Christ, not the priests. This is especially important because many who visit such centres to worship are believed to be doing so largely because of the priests and not for God and this is why such people would follow the priests to wherever they are posted.

What is happening is that many people are increasingly seeing such priests as God himself, rather than servants of God; but sadly, such priests are not doing enough, if at all, in disabusing the minds of such people of such perception. And this is a very dangerous development for the faith.

It is clear that the protest by Mbaka’s followers and the subsequent insults rained on Bishop Onaga by them was borne out of such perception of Mbaka as the arrowhead of their faith and worship. If not, what would have made any lay faithful to go against the directive of the Church as personified by a bishop and go ahead to insult him? Indeed, this was not the first time such would happen because of Fr Mbaka.

In 2019 after Bishop Onaga had summoned Fr Mbaka over his utterances also on Obi, his followers had stormed the Holy Ghost Cathedral and destroyed some structures there, after they could not ascertain the whereabouts of Fr Mbaka.

That this could be happening at all, sends a serious danger signal against the faith and Church that must not be ignored and which urgent action should be applied to emphatically ensure such will not happen again.

To this end, priests who run ministries have a duty to educate their followers on who is the boss – whether it is they, the priests, or God Almighty. This is important to avert a situation where Catholicism could begin to go the way of Pentecostalism where individual pastors are venerated above God.

The recent developments in Enugu have shown how dangerous that can be and everything should be done by the Church to put a permanent halt to it.

We deeply regret the embarrassment caused Bishop Onaga by the unruly action of those who insulted him and we pray that this situation is well handled to avert future occurrence.