Anambra will be among the States that will represent Nigeria at the forthcoming SAGE global Competition, Fides reports.

This is sequel to another remarkable feat by the students of Mater Amabilis Secondary School, Umuoji, in Idemili North Local Government Area of Anambra State, who took the overall second position at the 2022 National School Entrepreneurship Exhibition and Awards, qualifying as one of the two schools to represent Nigeria at the global stage of the tournament.

The national entrepreneurship contest is organized every year by SAGE, Nigeria (Students for the Advancement of Global Entrepreneurship), a global organization with branches in different parts of the world.

It is propelled by a vision to discover, raise and mentor a new set of entrepreneurial leaders. whose innovations and social enterprise address the major needs of their communities and the world at large. 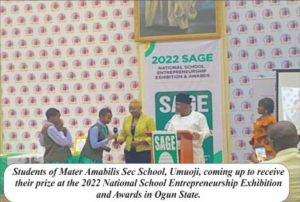 Various types of interesting innovations were on display during the five-day educational fiesta. At the end, the overall first position went to the students of Homat Group of Schools, Lagos State, who developed MED – SET, an innovation that can help to curb irresponsible self-medication, using USSD Code or Mobile App.

They designed a project called LITE – UP, a portable hydro-electric dam that converts salt water or urine into electricity and stores them. Divine Rays British School, Obosi, Anambra State, produced the team that took the third position.

They showcased a project termed, GEO – GREEN, a battery that extracts Carbon (IV) Oxide (smoke) from incinerators and automobile engines, and then converts it to electricity, thereby preventing environmental pollution.

The chief host of the event, former President Olusegun Obasanjo, encouraged the participants and urged them to hold on to the tenets of hard work, determination and service to God and humanity.

He emphasized that education and good moral upbringing were the two pillars upon which a life of success was built.

It is the first time a team from any of the five Southeastern states is making it to the global stage of the competition. Previously, the SAGE World Cup had been held in South Korea, United States of America, Brazil, Ukraine, etc. This year, Netherlands will play host to it although it is likely to take place virtually due to COVID travel restrictions.

Students from Mater Amabilis Secondary School, Umuoji, are preparing to take on their counterparts from different parts of the world sometime in August.