Weeks ago, I watched with shocking dismay, the video clip of a masquerade dancing right inside the Catholic Church, obviously at some point during the Holy Mass. Now, I initially thought it was one of these churches that take delight in imitating the Catholic church. However, after a closer look, I realized it was indeed happening in our very own Catholic church. I was shocked.

You know, Nigerians have more or less, seen it all. There is absolutely nothing new under the Nigerian sun. Wasn’t it in Ozubulu that innocent worshippers were shot dead as armed men stormed a Catholic church during Mass and did their thing and left??? Their target was the popular ‘Bishop Okonkwo’ or so. Can’t remember his real name. Because they couldn’t find him, their next port of call was the Holy Catholic church, during Mass. 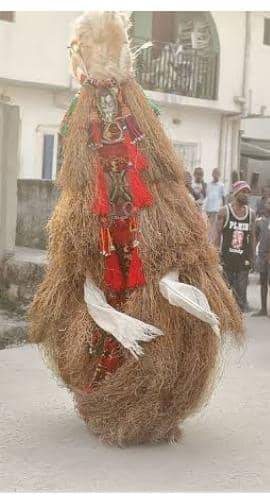 What about the video clip that went viral a month ago showing the popular Pastor/ Comedian, popularly known as Odumeje doing something that looked like consecration rites inside his church. He lifted up what looked like a Chalice and was praying, while his congregation looked on. I was truly sad. Let me stop at these two most recent examples.

The point I’m trying to make is that some of these things are wrong and should be condemned totally. Every Catholic knows about the sacredness of the Catholic Church. There is no reason under the Sun why any masquerade world enter inside the Catholic Church during the Holy Eucharistic Celebration. I was surprised to see that the Reverend fathers whom I believed were the officiating priests in the Mass, actually looking so comfortable and happy through it all. They even danced along with the masquerade.

What were they trying to prove? Inculturation??? Acculturation????? It just makes no sense to me. I was dying to write about it but somehow I didn’t get to do so. Just last night I came across the piece I will share now with you written by a priest of the Catholic Church. He is Rev. Fr. Richard Omolade. God bless him real good for speaking out! He spoke my mind on the matter. I hope you enjoy it as much as I did…

Many of us opened our WhatsApp recently with absolute dismay to see a masquerade, not only attending mass but dancing with some of the priests present, joining in the Egungun Dance. Later, this video became viral on Facebook and other social media. Various questions have been asked, and different answers have been given. Some even doubt that the episode took place in a Catholic Church. Some of these have been clarified: