Mary, Mother of God, Not Goddess

Various religions of the world, especially the ancient mystery ones, relished the reality of the divine feminine, many of which ranked high in pantheons of nations. The prevalence of these female gods (goddesses) or feminine elements in deities is not geographically circumscribed.

These notable goddesses across mountains and fountains (Ishtar, Hecate, Sekhmet, Kali, Ogwugwu, Ala, Isis, Demeter, Artemis Diana, Gaia, Aphrodite, Venus, Maia, etc.) exerted influence on the religious psyche of peoples and cultures. Some goddesses, like Isis and Demeter, were presented carrying a baby. This idea of the divine feminine feeds some Christians’ misconceptions about the cult of Mary, considering it a transposition, trans-personification and inculturation of these ancient goddesses.

This confused and hostile rhetoric notwithstanding, Mary, by special divine grace, is the mother of God and never the Virginal goddess nor the divine feminine. Irrespective of his oneness with God (cf. Jn 10:30), Jesus assumed human flesh in radical solidarity with fallen humanity and shared our nature (cf. Phil. 2:5-11; Gal. 4:4-5).

Though always God, Jesus became fully man and by divine grace became our brother (cf. Heb. 2:11; Rom. 8:29; Mk 3:34). Therefore, we are siblings of God the Son by grace. Similarly, Mary is the mother of God by grace. She is Theotokos, God-bearer, according to the Councils of Ephesus AD 431 and Chalcedon AD 451.

Christianity transitioned from the world of pantheons populated by male and female gods to monotheism. The conception of deity from uni-personal to the tri-personal reality of Father, Son and Holy Spirit did not eliminate the mentality that assigns feminine subjectivity to deities. Notably, the Christian understanding of the mystery of Mary has no connection with this human misinformed groping for God through goddesses. Mary is entirely a creation of grace. 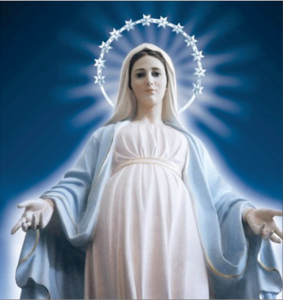 He possesses an in-personed nature as God, and Mary is the mother of the divine person, Jesus Christ, God the Son. The unfortunate manipulation or confusion of the authentic teaching of the Church on Mary does not invalidate its propriety.

The reasons that ground opposition against honour to Mary seem connected to some ancient misunderstandings relative to Christ. The misconceptions of the person and mystery of Christ contribute to the confusion about the place of Mary in the mystery of salvation. The adoptionists hold that Jesus was a great man adopted as a son by God, while the Nestorians teach that Jesus was two persons, one divine, and the other human.

These heresies were resolved by the Church in her first seven ecumenical councils. The cult of Mary suffers significantly from the fallout of these heresies. For some, it is perplexing referring to Mary as the mother of God since she is a creature of God. Beneath this objection is the misconception of motherhood as the source of the deity of Christ. It calls for clarification that motherhood is only the origin of persons in a nuanced context. Motherhood is a ‘source through which’ and not a ‘source from which’ comes man.

Mothers are not the originating source of human beings but the ‘source through whom’ we receive our beings. Since one’s mother is not only the mother of their body but of the humanity of their personal subject, Mary is the mother of the person of Jesus Christ, including all his personal properties. He received his humanity from God through Mary; hence, he is the Son of God and Son of Mary.

Mary, as the mother of Jesus, poses no challenge. The difficulty arises from calling her mother of God. Answering this question arrests another possible challenge: the question of Jesus Christ. Is he a uni-personal subject or a dual-personal subject? Is Jesus different from Christ, or is Jesus the Christ? Were Jesus to be historical and human while Christ mystical and divine, such that Mary would be the mother of the earthly Jesus Christ, the man Jesus and not God, it would imply that Jesus is bi-personal. In a word, it would mean that Jesus is schizophrenic.

If Jesus had a dual personality, his death would not have merited salvation and redemption. His saving acts are meritorious and redemptive only because he is God. Hence, the motherhood of Mary is basically an affirmation of the uni-personality of Christ and a clarification of the doctrine of the eternal divinity of Christ. There is no separate human Jesus and divine Christ; instead, one divine person of Christ Jesus is in two natures, namely, human and divine natures.

Being the mother of God is an act of grace from the Father, and that does not qualify her to be a goddess by any stretch. Mary is not the eternal origin of the supreme deity and not the source of Godhood. Mother of Christ is neither _goddess_ nor _God the mother._ She is not the feminine element in God. Mary is wholly a creature and only participates in the glory of God by grace, having been saved by her Son, Jesus Christ.

Having been saved in anticipation, she was elected to co-operate in her Son’s work of salvation in a unique way. So, our honour to Mary participates in the worship of God, who has done great things for a mere creature. Devotion to Mary is an honour to God’s grace. Disregarding Mary offends God’s honour. On the contrary, the worship of Mary profanes God’s name. She is a mother of God and not God the mother.

The denial of the divine motherhood of Mary is an inadvertent denial of the divinity of Jesus Christ. Simply calling Mary the mother of Jesus leaves the conception of the true identity of Christ in jeopardy. The logical conclusion of the doctrine of Mary’s divine maternity is the complete affirmation that Jesus is God-man.

Since the Trinitarian mystery presupposes that the divine nature shared by all the three divine persons and the individual persons can correctly be referred to as God, being the mother of Jesus is an essential warrant to call Mary the mother of God by grace. Hence, she is not a goddess.

In a radical way, Mary as a project of grace was divinely elected as the woman of salvation, the second Eve. She did not only stand opposed to evil at its incipient moment (cf. Gen. 3:15) but also wrestled it to the finish in its advanced stage (cf. Rev. 12). She stands as the opposite of the evil one as the greatest tribute to the highest pinnacle of the possibilities of human reception and co-operation with grace: “may it be done to me according to your words” (Lk 1:38). What the first Eve lost, the second Eve (Mary) gained and retained.

Her unreserved reception of grace and the greatest expression of its possibilities in all human persons warrants our respect. As the representative of humanity’s best destiny in God, Mary deserves the honour due her from one generation to the next. It is a privilege to be counted among those who call her blessed. With all her children living on both sides of eternity, I say Happy Birthday, Mother Mary!