As part of the projects to mark her Seven Years Anniversary, a Non-Governmental Organisation known as Martina Chinyere Enidom Foundation (MCEF), has renovated, fenced and fully equipped the Catholic Diocese of Awka-owned Nri Primary School, Neni, and the Umunri Primary Health Centre, Neni, as well as constructed the Mrs Martina Enidom Street, Neni, all in Anaocha LGA, Anambra State, as part of its contributions to improved quality education, healthcare and human development. 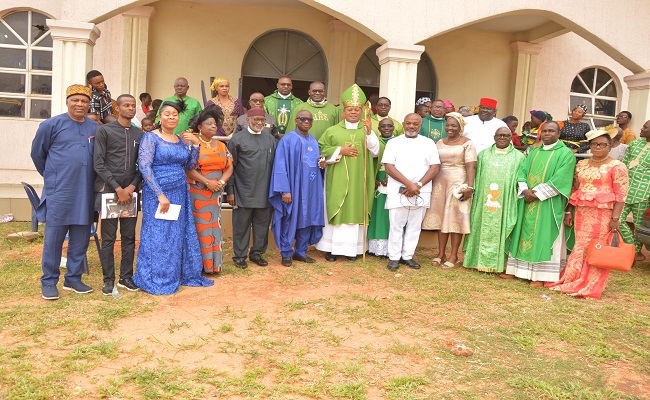 The Auxiliary Bishop of Awka Diocese, Most Rev Jonas Benson Okoye (centre with crosier), poses with concelebrants and some dignitaries after the Holy Mass. The bishop is flanked on his right by the chairman of MCEF, Engr Paul Enidom and on his left by the host parish priest of St Mary’s Neni, Rev Fr Henry Ezeobi. 4th left the Anambra State Commissioner for Basic Education, Professor Kate Omunugha.

Speaking at the July 18, 2021 commissioning and blessing of the remodeled Nri Primary School of St Mary’s Parish, Neni, Umunri Primary Health Centre and road projects, the chairman, MCEF, Engr Paul Enidom, said the projects were in memory of the late matriarch of the Enidom Family, Ezinne Martina Chinyere Enidom, who died on February 8, 2021, and was buried on April 16, 2021.

Engr Enidom, who is also the CEO of Paul-B Construction Ltd, noted that the Foundation which was named in honour of their late mother, was founded so as to keep alive the deceased’s ideals which were contributions to church development, quality education as a vehicle to banish poverty and

According to the chairman, the mission of the Foundation was to make Nri Primary School the best in Anaocha, and to enlighten the people, especially the wealthy, on the need to invest in education and human development. 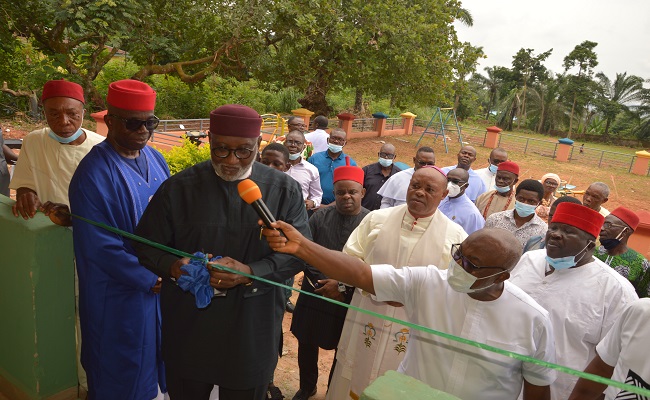 Fides gathered that the projects carried out in the school by MCEF included perimeter fencing of the compound with gate; complete renovation of the school blocks; equipping of the ICT classroom with computer sets, talking pens, desks and seats; new modern toilet facility, provision of overhead water tanks, construction of a standard football and standard handball pitches; construction of standard water drainage systems and employment of six ad-hoc teachers for effective teaching of the pupils.

This was even as the Foundation fully renovated the health centre with ceramic floor tiles, repaired the roof and put new ceiling, as well as provided overhead water tanks and solar system for uninterrupted power supply.

The chairman of MCEF in his address, announced that the health centre which stood adjacent to the primary school, would from 2021/2022 academic session 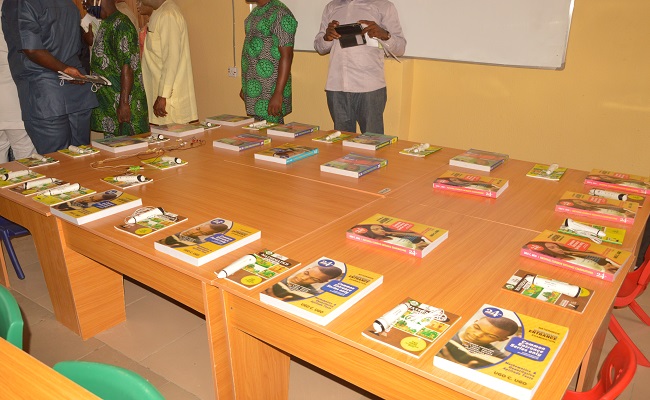 Fides camera shows some of the computer sets, talking pens and books, inside the ICT classroom.

serve as a sickbay for the school, while the Foundation picked the hospital bills. He added that the Foundation would from the next academic session, organize annual prize giving days so as to encourage competition among the pupils.

Other projects of the Foundation, according to Enidom, were employment of five teaching staff, provision of ceramic tiles for the principal’s office and the hall, as well as attraction of ICT building at Flora Azikiwe Model School, Neni. He revealed that 15 graduates at various educational levels, 16 university undergraduates and 34 secondary students, had benefitted from MCEF Scholarship Programme.

Earlier, when he led in the concelebrated Holy Mass to mark the event at St Mary’s Catholic Church, Neni, the Auxiliary Bishop of Awka Diocese, Most Rev Jonas Benson Okoye in his homily, commended Paul-B and

his family for what he described as their worthy investment in education, health, human and community development. 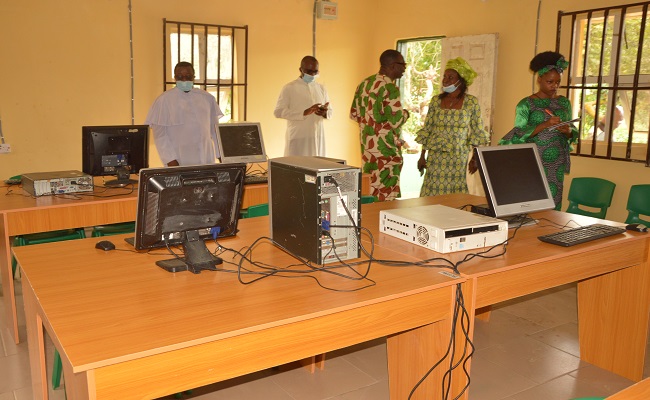 Fides camera shows some of the computer sets inside the ICT classroom.

Pointing out that the late Ezinne Enidom lived on in the projects, Bishop Okoye, prayed God to raise others who would toe the path of the family and donate for human and societal development.

The bishop, who said the diocese would include the name of the school in the list of institutions that would be given foreign aid, announced that a governing board would be constituted immediately for proper management of the primary school.

Speaking on the occasion, the Anambra State Commissioner for Basic Education, Professor Kate Omunugha, commended Engr Enidom for his investments in quality education and ongoing formation for teachers. She explained that such working private partnership was necessary so as to support the government in stable quality education delivery.

Prof Omenugha, who said she

was filled with nostalgia to have visited the primary school which was her alma mater, expressed her delight over the development. She donated a set of new marching band to the school in memory of her parents. 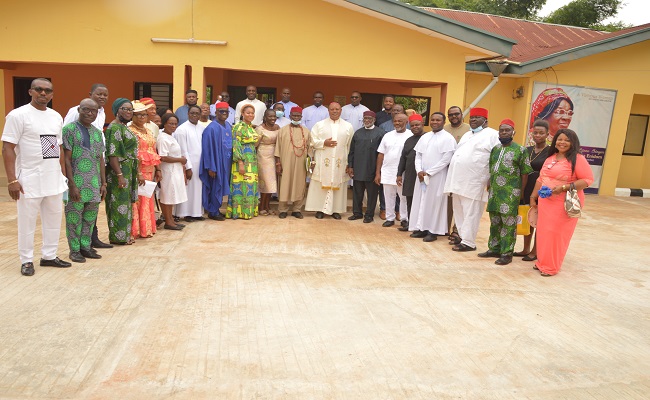 For his part, the Chairman, House Committee on Basic Education, Anambra State House of Assembly, Hon Ejike Okechukwu, commended the Foundation for donations, which, he said, were for education and health, describing the two as important things in human life. He directed the Anambra State Universal Basic Education Board (ASUBEB) to ensure the school got regular supply of books.

In his goodwill message, the ASUBEB Chairman, Chief Patrick Ugbaja, who was represented by his Admin Assistant, Mrs Uchenna Okeke, extolled MCEF for its contributions to quality education. The chairman, tasked the school Management on proper maintenance culture.