A Non-governmental organization, Martina Chinyere Enidom Foundation has organized a roundtable discussion for Catholic/government schools management geared at evaluating the effects and impact of government handover of schools to the mission 11 years after.

The roundtable discussion which was organized in partnership with the Catholic Dioceses of Awka and Nnewi was held at the Retreat and Pastoral Center, Okpuno,  Tuesday, September 20th.

The Chairman of the Foundation, Engr. Paul Enidom, said that the essence of the roundtable discussion was to carry out critical evaluation of the good intention of the government in handing schools over to the mission. He explained that there was need for the appraisal to be carried out in order to determine the state of the returned schools and identify areas where private sectors could come in to assist the effort of good governance and the mission. 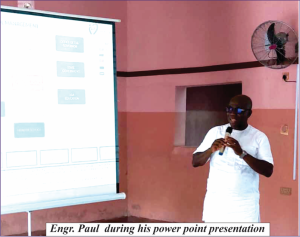 He said that public-private-church partnership was needed in repositioning education to ensure holistic development of the children which he described as the future of Nigeria. He noted that such collaborative effort was greatly needed, especially with the depressing economy which the country had been plunged into.

Engr. Enidom, the CEO of Paul B Construction Limited, said that the foundation had created a platform that availed stakeholders from the government and the mission the opportunity of coming together to brainstorm on how to make the returned schools better, noting that private sector initiative can be included to fill in the gap created and assist to better education.

He stated that though Soludo governance was committed to quality education, the enormous challenges of the State at the moment would make it difficult for the government to solve the problems that confronts education thus the need for private sector collaboration.

He described Anambrians as progressive individuals who were greatly blessed and capable of supporting the idea if sold to them. He noted that the foundation was proposing that the returned schools must be fenced and secured properly, computerized, powered by solar system and people that would look after the projects must be on ground and ready to take charge. He stressed the need for the mission to educate and encourage her faithful to support the policies of government.

‘The mission can rally round her faithful and encourage them to put up projects to support education. Much is expected from the mission in these regard’.

Enidom disclosed that after the foundation’s interaction with the Catholic Bishops of the Dioceses of Awka and Nnewi, Priests who would serve as managers of the created clusters of returned 96 schools in Awka diocese and 132 in Nnewi.

He described the foundation as a voice in the wilderness, noting that they took the lead by renovating and computerizing Nri primary school owned by the church and revealed that all the primary schools in Neni has been fenced and computerized by Chief Simon Eyisi who acted after they sold the idea to him.

Enidom said that the project and operational strategy would be unveiled in no distant time, saying that the Dioceses of Awka and Nnewi would be expected open up an account dedicated for the projects and noted that the idea was to ensure that no child was denied education as a result of parentage.

He beckoned on the priests appointed to work in various clusters to be dedicated in the project for the good of humanity and beckoned on Ndi Anambra to support the initiative.

Contributing at the roundtable discussion, Chairman House on Basic Education in the State House of Assembly, Hon. Ejike Okechukwu, said that the special administrative model being proposed by the foundation for the returned schools would encourage active participation and usher in the needed development. He noted that the idea if well harnessed would improve the standard ofeducation in the State.

Contributing, the Education Secretary of Nnewi Diocese, Fr. Cletus Chukwuemeka, commended the foundation for coming up with the idea geared at repositioning education. He said the project was achievable and express conviction that priests would man the clusters of the schools assigned to the effectively.

Adding his voice, a priest of Awka Diocese, Rev. Fr. Prof. BAC Obiefuna, said that the idea of the roundtable discussion was on developing models for repositioning education as it concerned the primary schools returned to the church. He noted that effective child development was need for a better society and expressed optimism that priests appointed to serve as managers in the various clusters would perform optimally for the achievement of the desired goals.