As Governor Willie Obiano of Anambra State prepares to handover to the Governor-Elect, Prof Chukwuma Soludo, on March 17, 2022, the Catholic bishop of Awka Diocese, His Lordship, Most Rev Paulinus Ezeokafor, has exhorted the leadership of the All Progressives Grand Alliance, APGA, led Anambra State Government not to lower the standard of governance in the state, saying that the trust and confidence reposed in the party by the electorate should not be taken for granted.

Bishop Ezeokafor who stated this at St. Patrick’s Catholic Cathedral, Awka, during a victory Thanksgiving Mass organized in honour of APGA, Anambra State Chapter, said that APGA’s feat in the last gubernatorial election was destined by God. 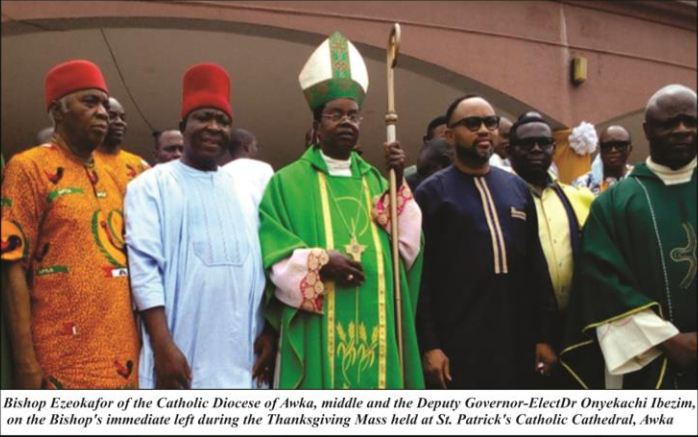 ‘Your victorious outing in the last gubernatorial election in the state was made possible by God. It was a hard-fought victory. We all witnessed what happened before the election. I’m not a card carrying member of any political party but I watch and monitor political proceedings.

‘The last guber election was not easy for APGA. Ndi Anambra voted because of what they believed the party had done over the years. We want that continued. You must continue to provide dividends of democracy to the people. Expectations are high,’ he said.

The outspoken cleric admonished them to guard the mandate given to them by Ndi Anambra jealously and judiciously and charged the party’s hierarchy to continue to work for the greater good of the people, noting that the electorate voted for them to continue and improve on their good works in the state.

He explained that the victory which he described as hard fought should not be toyed with, advising that the welfare of the people of Anambra State should be first on their agenda. Bishop Ezeokafor commended the APGA leadership for coming to appreciate God for what he had done for the party.

Speaking, the Chairman, APGA, Anambra State Chapter, Sir Norbert Obi, thanked the bishop for his advice and encouragement, and assured that the party would continue to churn out quality leadership in the state.