A Catholic priest, Rev. Fr Cornelius Okoye, has said that many married couples are faithful to their spouses by mere words whereas they are psychologically attached to someone else.

According to him, the devil has successfully hijacked the products of technology, such as the social media to control humanity and divert their minds away from the Christian family values of love, patience, tolerance, forgiveness and faithfulness.

He made the assertion in his homily delivered in the Holy Mass during which Ambassador John Mary Ibeka and his bride Rita Nnaji were joined in Holy Matrimony at St James Catholic Church Neni, Anaocha Council Area of Anambra State penultimate Saturday.

Fr. Okoye said that through social media channels such as Facebook, Whatsapp and Twitter, some married people engage in illicit relationships with other people other than their spouses. He urged Christian couples to avoid the mistake of assuming that God will understand when they deliberately neglect their obligations that are very necessary for maintenance of marriage such as attendance to Mass, prayers, show of affection to one another and constant communication. 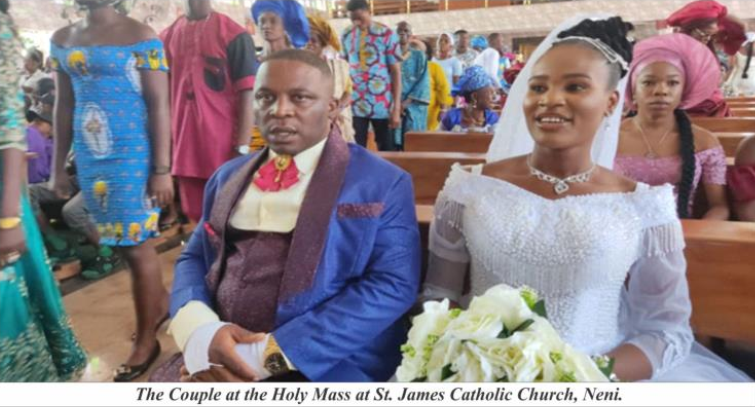 “If you want 1 + 1 to remain 1 in your marriage, you must invite Our Lady who intervened at the Wedding in Cana”, he concluded.

On his part, the chief celebrant at the Mass, Fr Cosmas Ebebe, advised the new couple to make it a point of duty to return to the church where they wedded, every year on their marriage anniversary, at least for the first five years in order to keep the fire of their marital love aflame as on the first day.

That way, he said, they will keep in mind what they asked God on their wedding day, as well as the massive love, support and encouragement of their family and friends who gathered in their numbers to witness the wedding. Other priests who concelebrated at the Mass included Frs. Amobi Maria Okonkwo, Geoffrey Onukwuili, Emmanuel Nwakasi, Adulphus Obi (host parish priest) and Ernest Simple Okoli, who received the marital consent.

The couple, John Mary and Rita, all smiles, hosted a reception after the Mass at parish hall where they cut their wedding cake, performed the bridal dance and numerous guests were generously feasted and souvenirs distributed.

The groom, Ambassador John Mary Ibeka, a philanthropist and the director of a prominent healthcare outfit in the state, said he and his wife were overjoyed by how much people loved them, demonstrated in the huge attendance at the wedding.