Many Go to Church in Search of Contracts Connections Bishop Ezeokafor

The Catholic bishop of Awka Diocese, His Lordship, Most Rev Paulinus Ezeokafor, says many Christians now attend church in search of material gains and not to worship God.

The Bishop who exhorted those involved in this to embrace God and desist from such act, gave the admonition at St. Theresa’s Catholic Church, Nibo, in Awka South Local Government Area of Anambra State, while presiding over a Concelebrated Thanksgiving Mass organized in honour of Barr. (Mrs) Nwando Obiano who was recently elevated to the position of a Permanent Secretary in the Ministry of Education, Anambra State.

According to the prelate, many Christians merely attended church today to look for contracts, connections and and easy life, emphasizing that God had never failed anyone who worshipped him in truth and in the spirit.

He reminded such people of biblical injunction, where, he said, God admonished all to seek His Kingdom first.

The outspoken cleric frowned on the way and manner people paid less attention to things of God, stating that no one had ever succeeded in outsmarting God, adding that God blessed and uplifted everyone according to their deeds. 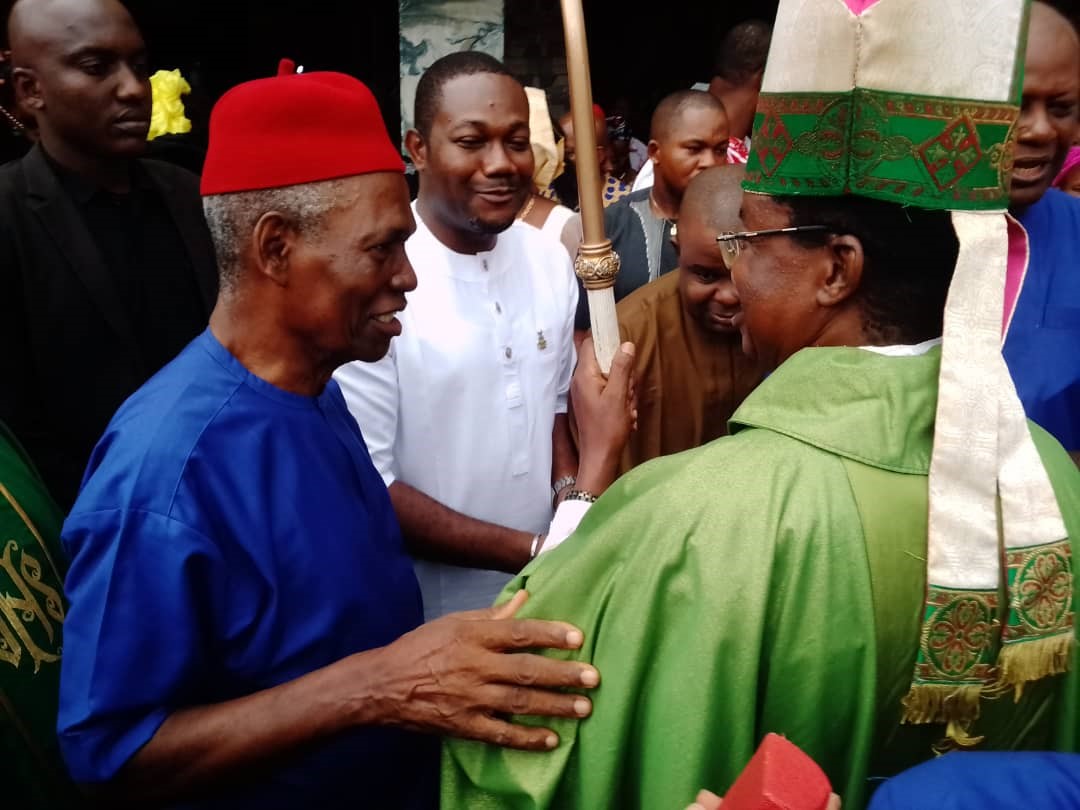 The Local Ordinary charged Christians to always seek first the kingdom of God and His righteousness and worship Him in truth and faith, rather than prioritize material things over the things of God or remember God only in time of need and difficulty.

Bishop Ezeokafor, while admonishing Christians, lampooned all the national lawmakers who voted against electronic voting and transmission of results, describing the reasons given by the legislators as lame, suspicious, and a calculated attempt by them to continue to rig themselves into power.

‘The issue of network failure is neither here nor there. 2023 is still faraway. Let them use now and address any problem that may arise from network provision. We have time. Let them fix the network issue and allow Nigerians embrace electronic voting and transmission of results,’ Bishop Ezeokafor suggested.

The celebrant, Barr. (Mrs.) Nwando Obiano, PhD, were joined by family members, relatives, friends and well-wishers, to appreciate God for her elevation to the post of Permanent Secretary in the Anambra State Ministry of Basic Education.

The event drew the participation of many dignitaries and stakeholders from different sectors of the state and beyond, including top-ranking public and civil servants, religious leaders, business moguls, and others who came to felicitate with the celebrant.

Speaking at the event, the Speaker, Anambra State House of Assembly, Rt. Hon. Uchenna Okafor, who described the elevation as a reward for hard work and a call for more dedication, congratulated the celebrant and hailed Gov Willie Obiano as a worker friendly governor who had remained committed to the welfare and motivation of the state’s civil servants since his assumption of office.

For his part, the husband of the celebrant, Dr. Edwin Obiano, also a retired civil servant, described the post as the pinnacle of civil service, and congratulated the wife, who, he said, had made the family proud by attaining such an enviable and juicy position in the service – a position, he said, he also dreamt to attain but could not till he retired as a Director.

In his remarks, the son of the celebrant and Publisher/Editor-in-Chief, Explorer Magazine, Mr. Tobenna Obiano, said they were privileged to have been blessed with such wonderful parents who instilled good virtues and fear of God in them and laid a solid foundation which saw them become not only graduates, but very successful in their respective fields of endeavour.

He said, ‘Seeing the kind of wonderful and lovely parents that God gave us and all that He has been doing for us in the past, especially this new elevation, we decided to thank God in a special way and also celebrate them in a big way. We thought it wise to celebrate our dear mother and her promotion now that she is alive to see it by herself, rather than doing so behind her.’

Earlier speaking, the celebrant, Barr. Mrs. Obiano, said her life had been full of testimonies, looking back to how she started, some of the challenges that had confronted her, and how God helped her surmount them all.

She narrated how she started as a teacher but later transferred her services to the civil service, where, she said, she showed more dedication and also enjoyed the adequate support and encouragement of the (now) ex-Permanent Secretaries and other senior officers in the ministry and eventually got to the apex.

She thanked Gov Obiano for finding her worthy for the appointment. She also thanked her boss, the Heads of Service, for reposing great confidence in her, as well as her family members.

Mrs. Obiano also pledged to remain dedicated in the service and continue to give her best to the state.

The event was chaired by the MD/CEO of Anambra Broadcasting Service, Chief Uche Nworah.