A 47-year old visually impaired man from Eziagulu in Ekwulobia Community, Aguata Local Government Area of Anambra State, has been allegedly killed and set ablaze by his younger brother, Onyedika Nnofu, over a land dispute.

As a consequence, the development has attracted the attention of the Joint National Association of Persons with Disability (JONAPWD), Anambra State Chapter, who are calling for justice for their member, Mmaduabuchi.

This was contained in a statement jointly signed by the state Chairman of the Association, Ugochukwu Okeke E.C.; the Public Relations Officer, Comr. Ifeanyi Igwegbe; and the Legal Adviser, Barr. Peter Muoneke, in which they also noted that the late blind Nnofu was the Chairman of the association in Aguata Local Government Area. 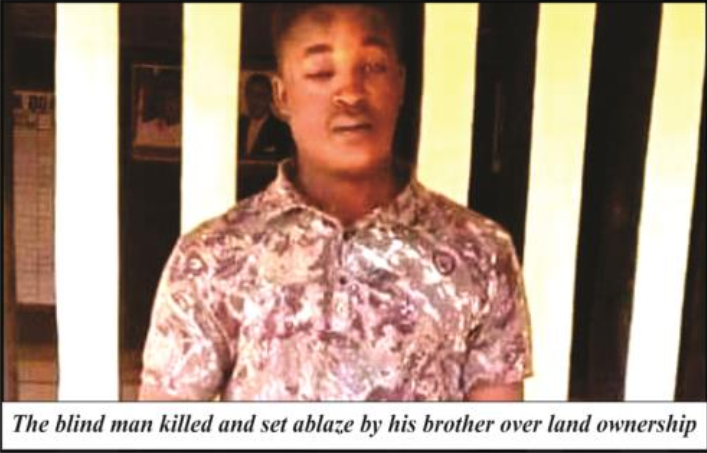 The group’s statement read in part, ‘The attention of the Joint National Association of Persons with Disability (JONAPWD), Anambra State chapter has been drawn to the gruesome murder of our Chairman in Aguata L.G.A. Chapter, Mr. Mmaduabuchi Nnofu, a visually impaired man.

‘Our sources told us that Nnofu was at home relaxing when the suspect came in with weapons and killed him before setting him ablaze within the compound. We suspect that he was murdered over a family land which had been duly assigned to him by their late father.

‘The late Mmaduabuchi, while alive, confided in us that the land in question was willed to him by their late father who also willed another one behind his house to the prime suspect. He also told us that his brother since then had tried all he could to take over the land by force for sale.

‘Hence, the prime suspect approached Aguata Customary Court, which in its wisdom, urged them to settle the issue out of court. They were still waiting to settle the case out of court only for us to hear the news that the suspect allegedly walked into his compound last Sunday and gruesomely murdered him.

‘JONAPWD believes that this evil act was perpetrated on our member because he was blind and helpless. Mmaduabuchi Nnofu was killed because his sibling saw him as nobody or disabled, especially because he was blind and unmarried. This negates his rights as a human as upheld by the United Nations Charter; Article 15 and Section 21(1b) of the Anambra State Disability Rights Law (2018), and Sections 33 and 43 of the 1999 Constitution of the Federal Republic of Nigeria (as amended).

‘Therefore, we are demanding for justice for the late Mmaduabuchi Nnofu. Justice is necessary to prevent a repeat of this man’s inhumanity to man on our members or any other person anywhere in Nigeria.

‘Hence, JONAPWD Anambra is appealing to the Nigeria Police Force, Anambra State Command to (a) arrest the prime suspect (b) conduct investigations into the matter and (c) charge him and other possible conspirators to court accordingly. We also want the Anambra State Government, international community, civil society organisations and other relevant bodies, to kindly wade into this ugly incident to bring lasting justice to our member.’

The state’s Police Public Relations Officer, Ikenga Tochukwu, confirmed the incident in a statement on Monday, stating that the suspect was undergoing interrogation.

He said, ‘The Anambra State Police Command today wishes to inform the general public that the suspect who allegedly murdered and set ablaze one Mr Maduabuchi Nnofu at Eziagulu Village in Ekwulobia has been arrested and now in custody.

‘The suspect, Mr Onyedika Philip Nnofu, is currently undergoing interrogation in police custody. Preliminary information reveals that the brothers were having issues over land.

‘The Commissioner of Police, CP Echeng Echeng, has sued for calm and assures a comprehensive investigation into the incident.’