It was hard to believe but pictures don’t lie. Within the past week Nigerians woke up to the horrible story of a man eating group of animals in human skin at a place called Oda; somewhere between Ihiala in Anambra State and Imo State.

A combined team of police, DSS and soldiers had stormed the place around 1 O’clock in early morning; whereupon they engaged in a shootout with the hoodlums. The combined security team overpowered them eventually and rounded up 30 of them. But that was when the story began.

A tour of their hideout led to a most horrible, nauseating and atrocious discovery. All over the place were human remains; some in various stages of decomposition, while some were decapitated. Worst of all, some of the decapitated human bodies were seen either being roasted in fire hearths or hung on the wall over fires in the kitchen; the way our mothers used to hang meat over the fire to dry.

It turned out that the hoodlums, whom I choose to call animals, were actually eating the bodies of their fellow human beings who they earlier kidnapped.

Among their victims were police men, soldiers and other innocent citizens. A traditional ruler who was obviously awaiting his gruesome fate of being used for dinner, was however rescued. Indeed, some days earlier, those animals had shot and killed two traditional rulers in Imo State and captured one. That one was the person rescued.

One striking thing was that the entire village had been deserted, leaving the animals to take over the land; the exact same way Boko Haram elements occupy villages in the North East of the country. 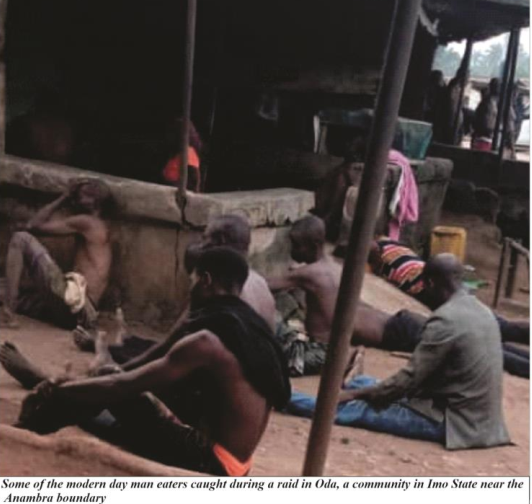 Two Mondays before this discovery, some hoodlums, while trying to enforce the sit-at-home order which the mainstream Indigenous People of Biafra, IPOB, had suspended, had attempted to kidnap a group of medical doctors on a medical mission around the area.

The security agencies were alerted and they swooped in and gave chase to the criminals, killing one and capturing another. Perhaps, it was information got from the one they arrested that led to the bursting of the hideout of those hoodlums and the horrendous discovery.

That this sort of thing could be happening in 21st Century Nigeria beats the imagination. For how, indeed, can any rational human being delight in killing, roasting and eating his fellow human being?

But beyond the gruesome discovery lies a more important thing that should not be glossed over. When at the initial stage of the Biafra agitation some people were attacking prisons and setting hardened criminals free, some of us shouted ourselves hoarse in condemnation of that style of agitation but we were termed Biafra haters; even saboteurs. But we were only looking at the long term implications of the style being adopted then in the agitation for Biafra.

We warned that if caution was not applied we could be creating monsters we would not be able to later control and we always pointed at the scenario in the north where they initially condoned Boko Haram, thinking it was nothing more than the usual political/religious stuff, only to realize late in the day that a new monster had come to town that no one could do anything about.

Today Boko Haram are sacking villages and attacking both believer and unbeliever. Churches and mosques are not spared. Parts of the North East have now been turned into ghost towns and economic activities have been killed.

But our words of caution were treated like the barking of dogs. Soon we started hearing of forced sit-at-home directives, with those venturing out, either killed or maimed, and their property destroyed. It never occurred to those enforcing it that we were only doing ourselves harm, rather than harming our perceived oppressors.

Security agents and their offices became prime targets as anarchy slowly but steadily creeped into our hitherto peaceful enclave. Schools were shut and students barred from taking exams. Appeals fell on deaf ears. The election was even threatened and business and social activities in the Southeast began to suffer, just because of our foolish brand of agitation.

In the course of this madness, the Igbo Nation lost two important doctors, one being Dr Chike, the husband of the late former information minister, Dora Akunyili.

When it seemed that those that caused this problem were becoming tired and wanted to end the madness, the little monsters they created refused to comply. We then had a situation where one group said no sit-at-home and other groups said there must be.

It was one of these groups that tried to kidnap the medical doctors that Monday in the guise of enforcing sit-at-home. Who knows what would have happened to the doctors if the kidnap attempt had not been foiled by the security agents? Would they have ended up as dried meat in the kitchens of those cannibals?

The bottom line is that the anarchy created by the skewed brand of Biafra agitation has bred this terrible situation as we predicted and what we see now is leaving us with little or no solution. These man eaters of Oda, for sure, are products of the anarchic situation. They were not heard of before now but have profited from the confusion created to unleash their own terror. This is the one we know, there may be others.

Today in the Southeast it is becoming dangerous to use some roads. For instance, those going to Abia or parts of Imo are now advised to avoid the Uturu axis; being an area where kidnappers now operate, hiding under the guise of Biafra agitation. They may not be the main body of the original agitators but, certainly, they are offshoots of the anarchy the main group created by failing to listen to advice.

We warned that when this monster being conceived then was let loose, everyone would suffer the consequences. Even now people are complaining about many army/police checkpoints. Why wouldn’t that be the case when the ant-infested wood some of us foolishly brought home is now attracting the lizards?

What would anyone have against mounting roadblocks to check the activities of killers? If there were no unknown gunmen, would there have been this number of roadblocks? Would some roads in the capital city of Awka and other places be barricaded? Surely, no one would expect the police to throw the road through their headquarters open and be attacked the next moment by unknown gunmen.

After having many of their men killed, wouldn’t it have been foolhardy for them to just relax and not defend themselves? Some of what we are seeing now are consequences of our rash actions of the recent past and from what I see coming, perhaps we ain’t seen nothing yet.

We should therefore be prepared to brace up for more hardship until such a time the menace of these hoodlums is crushed. We have to be suffering and smiling and hoping that God will touch the hearts of the hoodlums to simmer down and go about their activities in civilized ways.

During the agitation for Nigeria’s Independence, the likes of Zik never killed their brothers or destroyed their own property. They went about their agitation in civilized and accepted ways and eventually got us Independence.

For those who are easily brainwashed, we can shout and fight each other and burn our house but those will never give us the Biafra we seek. It is so because it is simply no way to achieve that. Anyone who burns down his house because he has issues with his enemy is a prize fool. You will be left with no house while your enemy enjoys the comfort of his.

What about those who kill themselves to prove their anger? They will die and their lands and homes will be claimed by the very people they termed their enemies. So where is the wisdom of committing suicide?

We should use this period of general home coming to reflect on some of these issues. Above all we should desist from giving in to sentiments which have been known to be the undoing of many people. Everything should be considered on its face value. We must insist that things should be done the normal way.

If we are in traffic, we must resist the temptation to shunt or to drive against traffic. Doing so is against the spirit of Biafra as Biafrans are known for discipline. When are before traffic lights, do we keep driving even when the lights have not turned green? True Biafrans are not known to be lawless.

If we continue being lawless we will be displaying animalistic tendencies like the man eaters of Oda; for it is not only when we eat human beings that we become beastly.

We should always look at long term implications of our actions in order to avoid future regrets. Giving in to sentiments and emotions will do us no good. Above all, we must say no to evil, even when it is done by our blood and flesh, for the evil we condone today will surely return to haunt us tomorrow.